Authored by Kelsey Davenport and Greg Thielmann on April 27, 2016 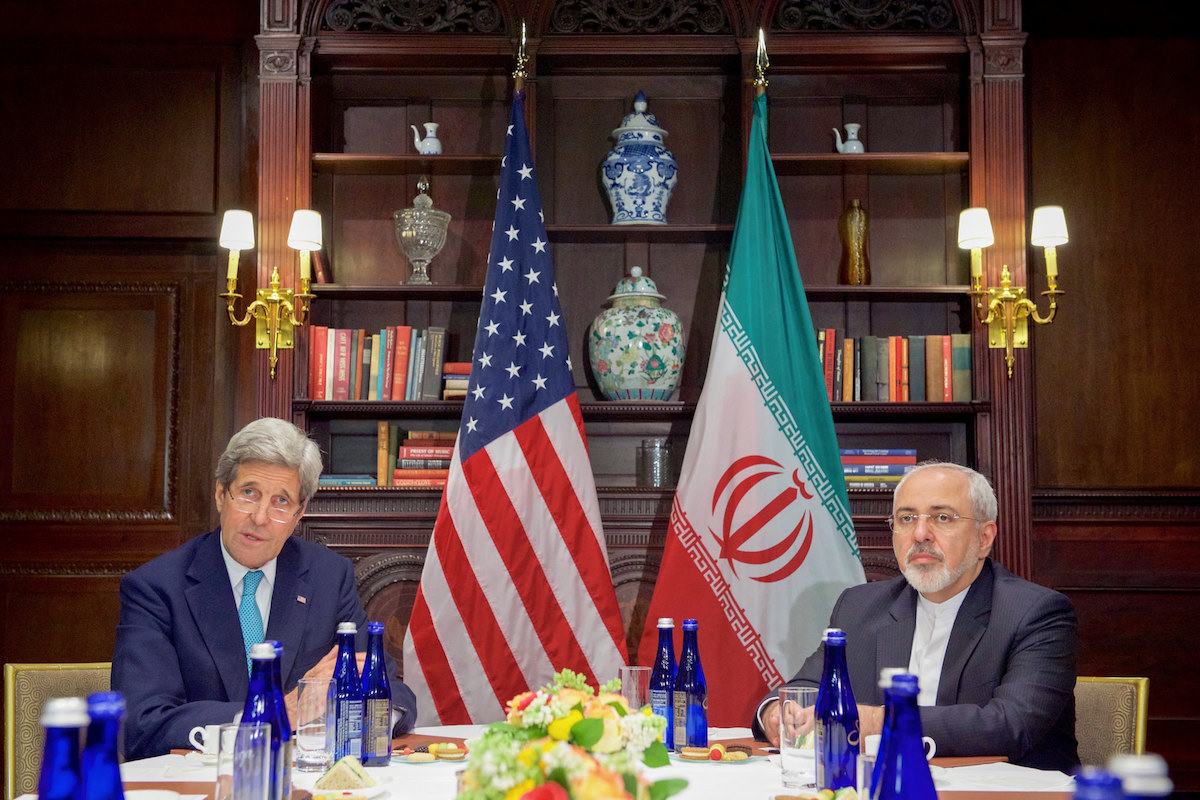 The meeting was the second for Kerry and Zarif in a week, and took place amidst concerns from Iranian officials that the United States has not met its sanctions-relief obligations under the deal, despite Iran implementing required restrictions on its nuclear program.

In April 22 remarks to the press, Kerry said that the United States is working to clarify “confusion among some foreign banks” and that the Departments of State and Treasury are “actively engaged with partner governments and the private sector” to answer questions about the sanctions that were lifted under the nuclear deal.

Zarif said he hoped that the statement made by Kerry would “open the difficult path that has been closed because of concerns that banks had about the U.S. approach towards implementation” of its commitments under the nuclear deal.

In an agreement finalized on April 22, the United States announced that it is buying 32 tons of heavy water, which is primarily used as a moderator for certain types of nuclear reactors, from Iran for $8.6 million. But a proposed amendment to the Senate Energy and Water Appropriations Bill that would prevent further purchases of heavy water, threatens the success of the nuclear deal.

The amendment, proposed by Senator Tom Cotton (R-Ark.), would prohibit the United States from using funds appropriated by the bill to purchase heavy water produced in Iran. Iran would likely perceive the amendment as violating U.S. obligations not to impose new nuclear-related sanctions under the nuclear deal. It would also interfere with the U.S. objective of keeping Iran's stockpile of heavy water to a minimum.

Iran is permitted to produce, store, and sell heavy water under the terms of the P5+1 (China, France, Germany, Russia, the United Kingdom and the United States) and Iran nuclear agreement.

The agreement allows storage of up to 130 metric tons of heavy water to meet Iran’s needs. Tehran will eventually use its heavy water as a moderator for the Arak reactor, which is being modified as part of the deal.

Unlike most heavy-water reactors, which are ideally designed to produce weapons grade plutonium, the Arak reactor’s modifications will significantly reduce the weapons-grade plutonium produced. Iran also committed not to build any new heavy water reactors, or facilities to separate plutonium from spent fuel, for 15 years. When the Arak reactor is commissioned, Iran will only be allowed to stockpile 90 metric tons of heavy water.

If the Cotton Amendment becomes law, Iran is likely to perceive the prohibition on heavy-water purchases as a “new” nuclear sanction (as may other members of the P5+1). If the amendment prohibits the Department of Energy from using funds in the appropriations bill for future purchases of heavy water, it could constitute a sanction.

Before acting, Congress should obtain a legal determination as to whether or not the prohibition constitutes a sanction. Under the terms of the Joint Comprehensive Plan of Action, the United States committed not to re-impose nuclear sanctions or impose new nuclear-related sanctions. In section 31 of the agreement it states that Iran will treat “imposition of new nuclear-related sanctions, as grounds to cease performing its commitments under the JCPOA in whole or in part.” Iran could argue that the prohibition on heavy water purchases is grounds for it to abandon its obligations under the deal.

The amendment would also interfere with the key nonproliferation objective of keeping Iran’s heavy water stockpile to a minimum. The United States has an interest in keeping Iran’s stockpile of heavy water below the levels stipulated in the deal, and Washington’s purchase helps fulfill that aspect of the agreement.

Iran began producing heavy water in August 2006. In February 2016, the International Atomic Energy Agency (IAEA) noted that Iran had 130.7 metric tons, slightly in excess of the 130 metric ton the limit set by the deal. According to the IAEA, Tehran shipped out 20 metric tons to remain in compliance with the agreement. With the sale of 32 metric tons to the United States, if Iran produces heavy water at a rate of 16 tons per year, it will remain below the limits for the next two years. That timeline would extend for over four years if the sale of 40 metric tons to Russia, currently being discussed by Moscow and Tehran, is completed.

In an interview with the Wall Street Journal on April 22, U.S. Secretary of Energy Ernest Moniz said that the United States tested the water and “it meets spec.” He said the U.S. purchase would send a statement to the world that Iran’s heavy water can be purchased. The purchase will benefit U.S. National Laboratories.

The already finalized purchase of 32 metric tons of Iran’s heavy water therefore aids in implementation of the nuclear agreement—a clear benefit to U.S. national security, as the agreement blocks Iran’s pathways to the bomb.

Iran appears to have attempted the long awaited maiden flight of its large space rocket, the Simorgh, on April 19. The Simorgh space launch vehicle (SLV) is assessed to be capable of carrying a payload 2-3 times heavier than the Shafir SLV used in four previous successful satellite launches.

When Iran first displayed a two-stage mock-up of the Simorgh in February of 2010, it was anticipated that an actual rocket would be used for satellite launches scheduled before the end of that year. The launch of the Simorgh had been predicted periodically since then, most recently in March following the completion of new facilities at the Imam Khomeini Space Center near Semnan and release of a series of “notices to airmen” (NOTAMs), which customarily precedes such launches.

When the Simorgh launch finally occurred, it was neither heralded nor acknowledged by the Iranian government. The news of the launch was broken by U.S. journalists citing unnamed Pentagon sources. According to the sources, the payload did not reach orbit.

These murky details will do little to alter common congressional perceptions that the Simorgh is a stand-in for an intercontinental ballistic missile (ICBM), as reflected in the 2013 characterization by Sen. Robert Menendez (D-N.J.) of Iran’s space program as “just a cover for military ballistic weapons program[s].”

Independent experts, however, point out that developing space rockets is useful, but not sufficient for developing military missiles. If, as appears to be the case, the Simorgh’s design is optimized for placing satellites in orbit rather than delivering warheads to the earth, converting it to an ICBM would not be a trivial endeavor. Launching satellites does not permit mastering the challenges of ensuring that a warhead can safely re-enter the atmosphere and achieve sufficient accuracy to reach its target.

Moreover, as Michael Elleman of the International Institute of Strategic Studies notes: “An ICBM based on Simorgh technology would be very large and cumbersome to deploy as a military system, If Iran were to transform its Simorgh into an ICBM, it would take a handful of years, and would not likely become operational before 2020.”

The Simorgh launch will provide grounds for complaint by the EU-3 (France, Germany, and the United Kingdom) and the United States that it is inconsistent with UN Security Council Resolution 2231, which “calls upon Iran not to undertake any activity related to ballistic missiles designed to be capable of delivering nuclear weapons…” However, Iran has argued that the clause does not apply to such launches, a position likely to be supported by Russia and China.

Iran issued its own domestic progress report on the implementation of the P5+1 and Iran nuclear deal. The April 17 report was published in several Iranian media outlets.

Ariane Tabatabai provided an analysis on April 19 of the report for Bulletin of the Atomic Scientists.

“Far from just shifting the blame to Washington, and trying to place the burden on its shoulders, the Foreign Ministry identifies the challenges before the JCPOA with more objectivity than what we’ve come to expect from the Islamic Republic. The report does enumerate obstacles before Iran stemming from beyond its borders, and from US actions, but notes that the greatest challenges are in fact domestic.”

May 9-13: IAEA Board of Governors Programme and Budget Committee Meeting, Vienna

May 27: IAEA Director-General’s report to the Board on Iran’s Implementation of the Nuclear Deal (expected)

June 6: Register for the Arms Control Association Annual Meeting, which will include a panel on the nonproliferation challenges facing the next U.S. President.