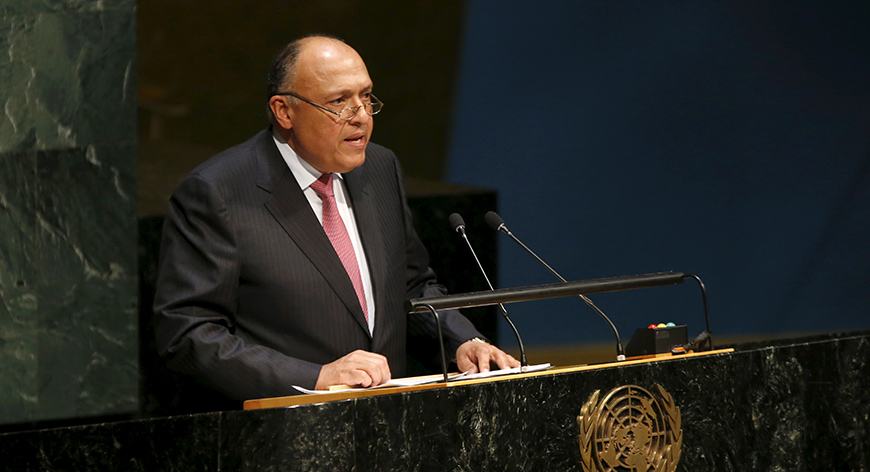 At the mid-point in the month-long 2015 Nuclear Nonproliferation Treaty (NPT) Review Conference in New York, there is growing frustration about the new approach being pursued by Egyptian Foreign Minister Sameh Shoukry and other Arab League states on the goal of convening a conference to discuss a weapons of mass destruction (WMD) free-zone in the Middle East.

A proposal engineered and advanced by Egypt would give the UN Secretary General the sole responsibility to hold a conference on establishing such a zone. But this proposal, which would cut out Finnish diplomat Jaako Laajava—the facilitator—and three original conveners, threatens to derail the fragile progress made to date.

Egypt called for the establishment of two working groups: one to deal with the “scope, geographic demarcation of the zone, prohibitions and interim measures” and a second to deal with “verification measures and implementation mechanisms.” In working papers submitted to the 2015 NPT Review Conference, the Non-Aligned Movement and, for now, the Arab League, has stated its support for Cairo’s general plan.

However, according to multiple diplomatic sources at the NPT review conference, the idea is a non-starter for other key states, and the prospect that the Egyptian-engineered proposal could be the reason this NPT review conference fails to achieve a consensus final outcome does not sit well with many Arab League states either.

Israel is only an observer at the 2015 NPT Review Conference, but submitted its perspective on the zone’s progress. The Israeli perspective stated Israel supported continued engagement, noted that a meaningful process will require direct engagement between the states, and said a zone must address a “broad range of security challenges facing the region.”

It is unclear what Egypt’s motivations are for trying to cut out Laajava and three of the original conveners—the United States, the United Kingdom, and Russia. Frustration over the slow pace of progress is understandable, but the efficacy of a new process is questionable. And it is certainly difficult to justify excluding the United States, given Washington is the most likely to help bring Israel to the negotiating table.

Disagreements between Israel and the Arab League over inclusion of regional security issues on the conference agenda—the stated reason for postponing the December 2012 conference—may be at the heart of Egypt’s abrupt about-face.

After five meetings held by Laajava and states in the region between October 2012 and June 2014 failed to reach an agreement on an agenda, Laajava’s team prepared a working paper for consideration that included regional security issues—it's a reasonable and fair approach that would lead to a win-win outcome: the convening of a long-awaited conference on creating a WMD-free zone involving all the regional players.

If the inclusion of regional security issues on the agenda for the conference is driving Cairo’s call for a new process, then Egypt needs to rethink its approach and engage with Israel to work out a solution. Unlike other countries in the Middle East, Egypt has a working relationship with Israel. With a little political momentum and willingness to compromise, this issue can be resolved.

Nobody wins by holding progress on a Middle East WMD free-zone hostage over a resolvable dispute on the agenda. Establishing a zone would be a significant step toward adding stability to the region by removing the threat of weapons of mass destruction.

Treaty on the Prohibition of Nuclear Weapons