“[My time at ACA] prepared me very well for the position that I took following that with the State Department, where I then implemented and helped to implement many of the policies that we tried to promote.”
– Peter Crail
Business Executive for National Security
June 2, 2022
New START: Still Doing the Job

The New Strategic Arms Reduction Treaty (New START) between Russia and the United States was signed five years ago today. Last week, Washington released the latest data exchanged under the treaty on the numbers of U.S. and Russian nuclear weapons.

Considering that Russia and the West are passing through the worst political-military crisis since the end of the Cold War, New START’s latest numbers are particularly welcome. President Barack Obama should further burnish U.S. nuclear disarmament bona fides by ordering an acceleration of the treaty reductions already programmed and announce it at the opening of the 2015 Nuclear Nonproliferation Treaty (NPT) Review Conference later this month.

Heading toward the treaty limits 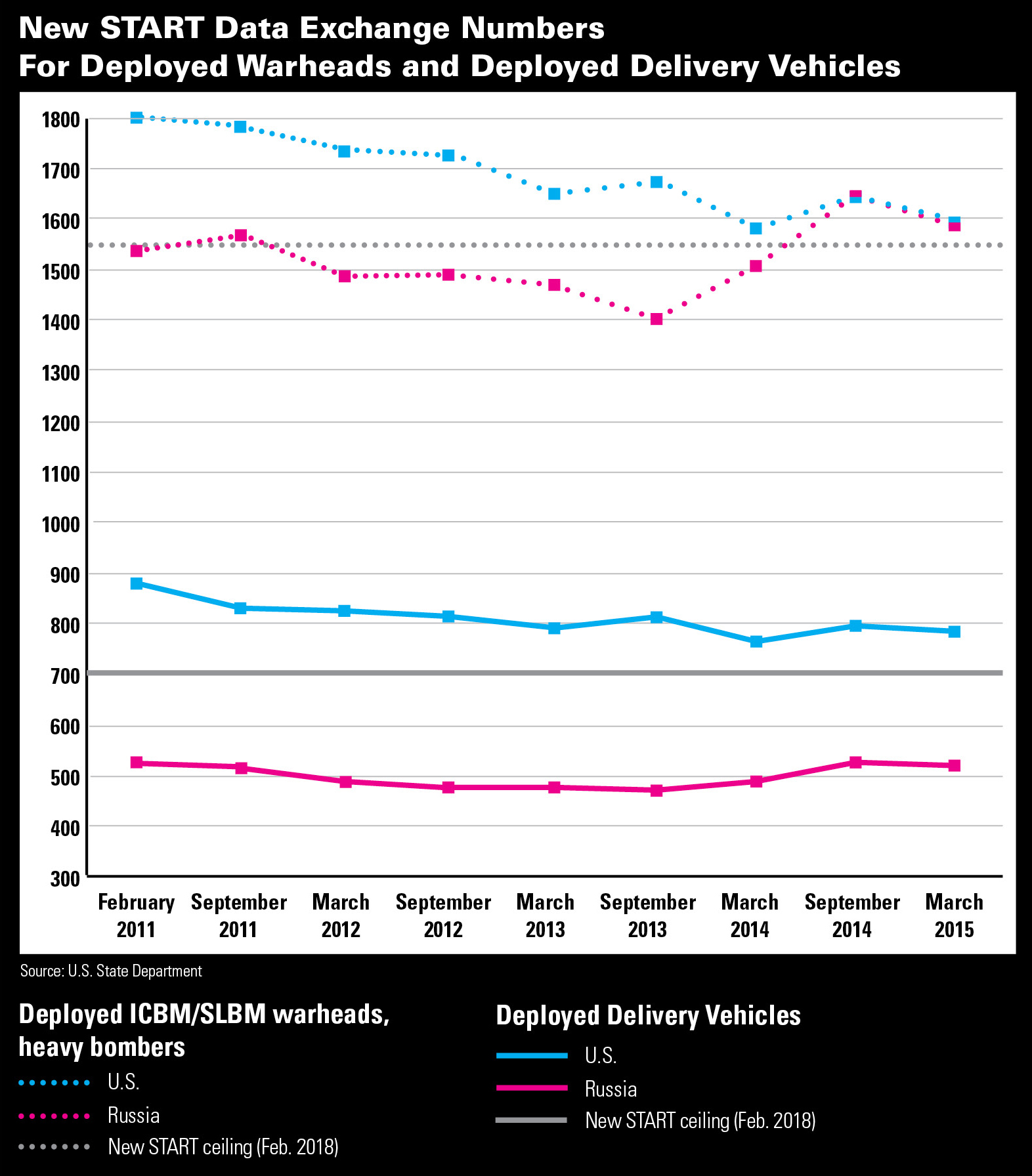 In spite of serious differences over Ukraine and Intermediate-Range Nuclear Forces Treaty compliance, and Moscow’s unwillingness so far to engage on New START follow-on discussions, the two parties continue to creep toward the numerical limits that will go into effect on February 2018 under the current strategic arms treaty. Just as importantly, the inspection measures established by the treaty to lend credibility to the data exchanged continue to function smoothly.

A caveat is always advisable when looking at individual data exchanges. Since these biennial “snapshots” sometimes reflect spikes or dips in deployed forces resulting from temporary phenomena, such as ballistic missile submarines going into or out of overhaul, they do not tell the complete story. A more revealing picture is derived from the trend lines established by the nine data exchanges to date. (See Table for trends in the deployed weapons categories.)

The most striking feature of the last two data exchanges is that the two parties had almost identical numbers of deployed warheads, as well as of deployed and non-deployed missile launchers and heavy bombers. Intersecting trend lines above the ceilings were not anticipated when the treaty was debated more than five years ago. In fact, one of the major complaints about New START by critics at the time was that the United States would have to make significant reductions--whereas the Russians, who had already maxed out their potential, would not have to make any reductions in deployed nuclear forces.

In recent years, however, Moscow has made the size of its arsenal a priority, stressing the need to rely increasingly on its nuclear forces to compensate for perceived economic and conventional military weaknesses. It has used nuclear forces to send not-so-subtle political signals and has deliberately engaged in saber rattling with regard to Ukraine. Accordingly, Russia has sought to match deployed warhead numbers by postponing retirements of older missiles and has avoided negotiating lower limits.

Although these developments have, ironically, demonstrated the value for the United States of the treaty limits, the overall impact of Moscow’s new course is regrettable. Russia is foregoing a less expensive and less provocative way to ensure its own security and inhibiting U.S. efforts to reduce its own dependence on nuclear weapons.

Russia is now laboring with a significant Cold War overhang in obsolescing and vulnerable, heavy missiles, each tipped with ten multiple independently targetable re-entry vehicles. In order to replace its deployed warheads on a one-for-one basis, it will have to rely on a constricted industrial base and attempt to overcome the effects of Western sanctions and depressed oil revenues. It will probably not be able to complete its current modernization cycle until well into the next decade, making likely that a significant gap will open up in the U.S.-Russian strategic forces balance.

The United States is in a much more favorable position than Russia to maintain its strategic forces at New START ceiling levels through the decade. Indeed, although the current U.S. rationale for slow rolling toward the 2018 ceilings is often couched in practical and budgetary terms – citing the additional costs and administrative inconvenience of accelerating reductions – it actually reflects policy inconsistency and political timidity.

The large U.S. advantage over Russia of some 300 deployed delivery vehicles has narrowed only slightly during the treaty’s implementation timeframe so far. The geographic and technological advantages of the U.S. submarine and bomber legs of the nuclear triad are even more pronounced than during the height of the Cold War. The conclusion of the Obama administration’s review of nuclear deterrence requirements, that the United States could safely reduce warhead levels by another one-third, points to the significant strategic advantages the United States still enjoys.

Considering that the U.S. Strategic Command is already likely to have adjusted to the 2018 New START levels for targeting purposes, it is reasonable to conclude that politics rather than military or economic necessity accounts for the administration’s failure to pick the low-hanging fruit of accelerated reductions in pursuit of the president’s Prague agenda.

Icing on the cake

New START continues to prove its worth with every inspection and every biennial data exchange. This piece of President Obama’s nuclear legacy is secure. Although political circumstances have narrowed his room for maneuver in the final two years, he still has a chance to garnish the key nuclear arms control achievement of his first term.

President Obama should announce at the opening of the 2015 NPT Review Conference in New York on April 27 that he is ordering the U.S. military to complete the scheduled reductions of deployed warheads and heavy bombers by the end of his term in January 2017, one year ahead of schedule. This action would not require congressional approval. It would not require negotiations with Russia.

Announcing accelerated reductions would represent a small step, but achieving results more rapidly than previously promised, could at least be offered as a token of sincerity given the ambitious U.S. goals already on record for reducing the number and role of nuclear weapons. Such an initiative would not be likely to have much competition on the short list of recent U.S. accomplishments in fulfilling its disarmament obligations as a nuclear weapons state under the NPT.