Talks Resume March 15: "A good deal is at hand"

Following the March 2-6 round of P5+1 (China, France, Germany, Russia, the United Kingdom, and the United States) and Iran nuclear talks in Montreux, Switzerland, statements from the principle negotiators suggest the two sides are close to reaching agreement on the political framework for a comprehensive, long-term nuclear deal.

"We have made progress in narrowing the gaps, but those gaps still exist," President Barack Obama said in an interview with CBS News' "Face the Nation" on Saturday that was broadcast on Sunday.

In an extensive interview with Anne Curry of NBC News on March 4, Iran's Foreign Minister Mohammad Javad Zarif said we believe we are 'very close' to a nuclear deal.

In an interview with a weekly affiliated to the Islamic Republic of Iran Broadcasting published on Saturday, Zarif said, "I believe there are more chances of success than failure."

On Saturday, the foreign ministers of the EU and the P5+1 group met in Paris to compare notes. Following the meeting, U.S. Secretary of State John Kerry and French Foreign Minister Laurent Fabius spoke to reporters.

As Foreign Minister Fabius said a moment ago, we want an agreement that's solid.  We want an agreement that will guarantee that we are holding any kind of program that continues in Iran accountable to the highest standards so that we know that it is, in fact, a peaceful program.  All of us in the P5+1 are deeply committed to ensuring that Iran does not obtain a nuclear weapon.  And we continue to believe that a comprehensive deal that includes intrusive access and verification measures, and blocks each of the pathways to securing fissile material for a bomb and then to try and make a bomb itself, that the best way to achieve the goal is to shut off those pathways.

"Now, I agree with Laurent," Kerry went on to say, "We have made progress, but there remain gaps--divergences, as he said.  And we need to close those gaps.  And that is our goal over the course of the next days.  We have a critical couple of weeks ahead of us."

Kerry reported that the P5+1 negotiations with Iran will resume March 15; Iranian news outlets report the location will be Lausanne, Switzerland.

Israeli Prime Minister Benjamin Netanyahu delivered a strong attack on the P5+1 strategy to prevent a nuclear armed in his March 3 address to a joint session of Congress, but failed to present a viable alternative, according to the White House, as well as most U.S. political commentators and foreign policy specialists.

Instead, as William Galston of The Wall Street Journal put it:

... he offers the unsupported hope that more sanctions will bring Iran to its knees. This is wishful thinking masquerading as hardheaded realism.

We have to face facts. We cannot entirely eliminate Iran's capacity to enrich nuclear materials-even through a military strike. The best we can do is mix carrots and sticks, inspections and surveillance to deter Iran from breaking through negotiated limits and racing toward nuclear weapons.

Judged against the ideal, the emerging deal doesn't look good. Judged against feasible goals and actual alternatives, it looks a lot better.

Other notable critiques and columns on the Netanyahu address include:

On Friday, February 27, Senate Foreign Relations Committee Chairman Bob Corker (R-Tenn.), along with five Republican and six Democratic colleagues, introduced legislation (S. 615) they are touting as a simple up-or-down vote on a possible P5+1 nuclear deal with Iran. Any nuclear deal with Iran does not require Congressional approval because it is not a treaty or an agreement for nuclear cooperation.

But as editorials over the weekend from The New York Times ("Sabotaging a Nuclear Deal with Iran") and Bloomberg ("Keep Congress Out of the Iran Talks")point out, the Corker bill is more than a simple up-or-down vote. Instead it could complicate the P5+1 and Iran talks at a critical juncture. If it were to become law over a presidential veto, it would delay implementation of any deal and also provide an opportunity to those who want to blow up the effective diplomatic solution just weeks after negotiations conclude.

Last week on the heels of Netanyahu's address to Congress, Senate Majority Leader Mitch McConnell (R-Ky.) and Corker proposed bypassing the regular committee process and rushing the bill to the floor for a vote. This angered several Democrats, including Minority Leader Harry Reid (D-Nev.) who called it "a transparently political move."

The ranking Democrat on the Senate Foreign Relations Committee, Bob Menendez (D-N.J) and several colleagues wrote McConnell to call on him to postpone any action on the Corker bill until after March 24.

Corker says he will bring up their bill in committee and onto the Senate floor before the end of March. If voted on by the Senate, sanctions legislation that has also drawn a Presidential veto threat may be offered as an amendment to the Corker bill.

In a highly unusual move intended to dissuade Iran's leaders from entering into a diplomatic agreement with the United States and the other members of the UN Security Council, a group of 47 Republican Senators have written a letter to Iranian Supreme Leader Ali Khamenei.

Josh Rogin, who first reported on the letter for Bloomberg View, writes, "Many inside the Republican caucus ... hope that by pointing out the long-term fragility of a deal with no congressional approval ... the Iranian regime might be convinced to think twice" about the agreement.

"Iran's ayatollahs need to know before agreeing to any nuclear deal that ... any unilateral executive agreement is one they accept at their own peril," freshman Sen. Tom Cotton (R-Ark.) told Rogin.

Rejecting a comprehensive nuclear deal with Iran before it is reached is irresponsible and dangerous. If the United States violates the interim agreement and talks fail, Iran is likely to move down the path of escalation.

Sen. Ron Johnson (R-Wis.), one of the letter signers, dismissed the Obama administration's effort to reach a negotiated deal that could contain Iran's nuclear program and suggested that the United States and Israel may need to take military action to prevent the Tehran regime from obtaining a nuclear weapon.

"We cannot allow them to have a nuclear weapon, if that means military action, that's what we'll end up taking," Johnson said during an appearance on Fox News Sunday.

The letter should make it clear to those in the Senate who support a diplomatic option that prevents a nuclear armed Iran, that it would be risky, if not foolish, to allow an up-or-down-vote on the P5+1 and Iran nuclear agreement, or a vote on the president's existing legislative authority to waive sanctions against Iran as required for the implementation of the deal.

Deal vs. No Deal

The P5+1 agreement with Iran that is taking shape would block Iran's major potential pathways to nuclear weapons development-the uranium-enrichment route and the plutonium-separation route-and guard against a clandestine weapons program. It will establish strict limits on Iran's nuclear program for more than 10 years, and perhaps up to 15 years. It would put in place intrusive inspections to deter and promptly detect any deviations from the agreement-inspections that would last indefinitely.

Failure to reach a deal will result in an unconstrained Iranian nuclear program with less international monitoring, increasing the risk of conflict and a nuclear-armed Iran.

If members of Congress try to delay, block, or reject the emerging P5+1 agreement with Iran, hoping that more sanctions will lead to a better deal, they are dangerously mistaken. 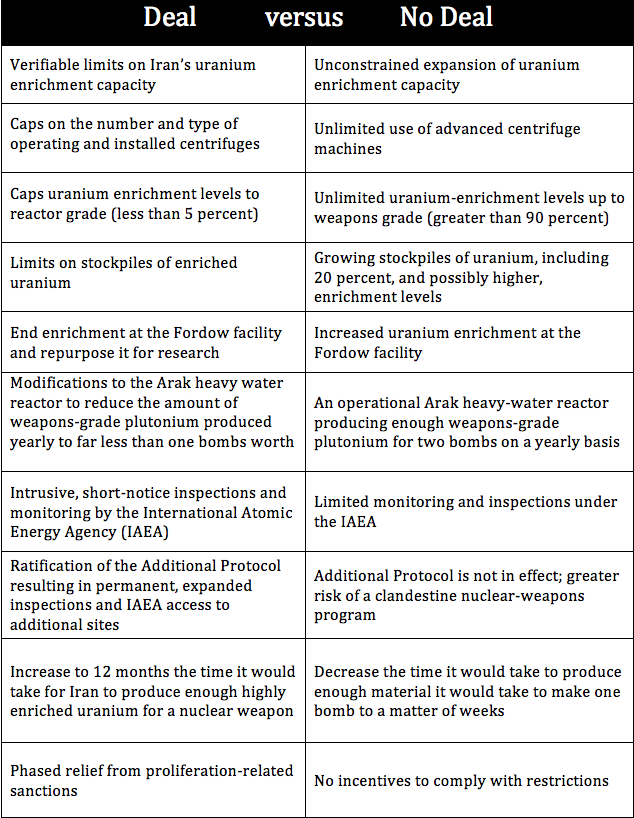 Week of March 15 - Resumption of political level talks between Iran and the P5+1, Lausanne, Switzerland.

End of March 2015 - Target date for Iran and the P5+1 to reach a political framework agreement.

June 30, 2015 - Deadline for Iran and the P5+1 to complete the technical annexes for a Comprehensive Joint Plan of Action.