“What's really strikes me about ACA is the potential to shape the next generation of leaders on arms control and nuclear policy. This is something I witnessed firsthand as someone who was introduced to the field through ACA.”
– Alicia Sanders-Zakre
ICAN
June 2, 2022
President’s ‘16 Budget Calls for Unsustainable, Unnecessary Nuclear Weapons Spending

Authored by Kingston Reif on February 3, 2015

On February 2 the Obama administration released its fiscal year (FY) 2016 federal budget request. The request is the administration’s biggest down payment to date on a planned unaffordable and unsustainable nuclear spending binge to rebuild all three legs of the nuclear triad and their associated warheads and supporting infrastructure. 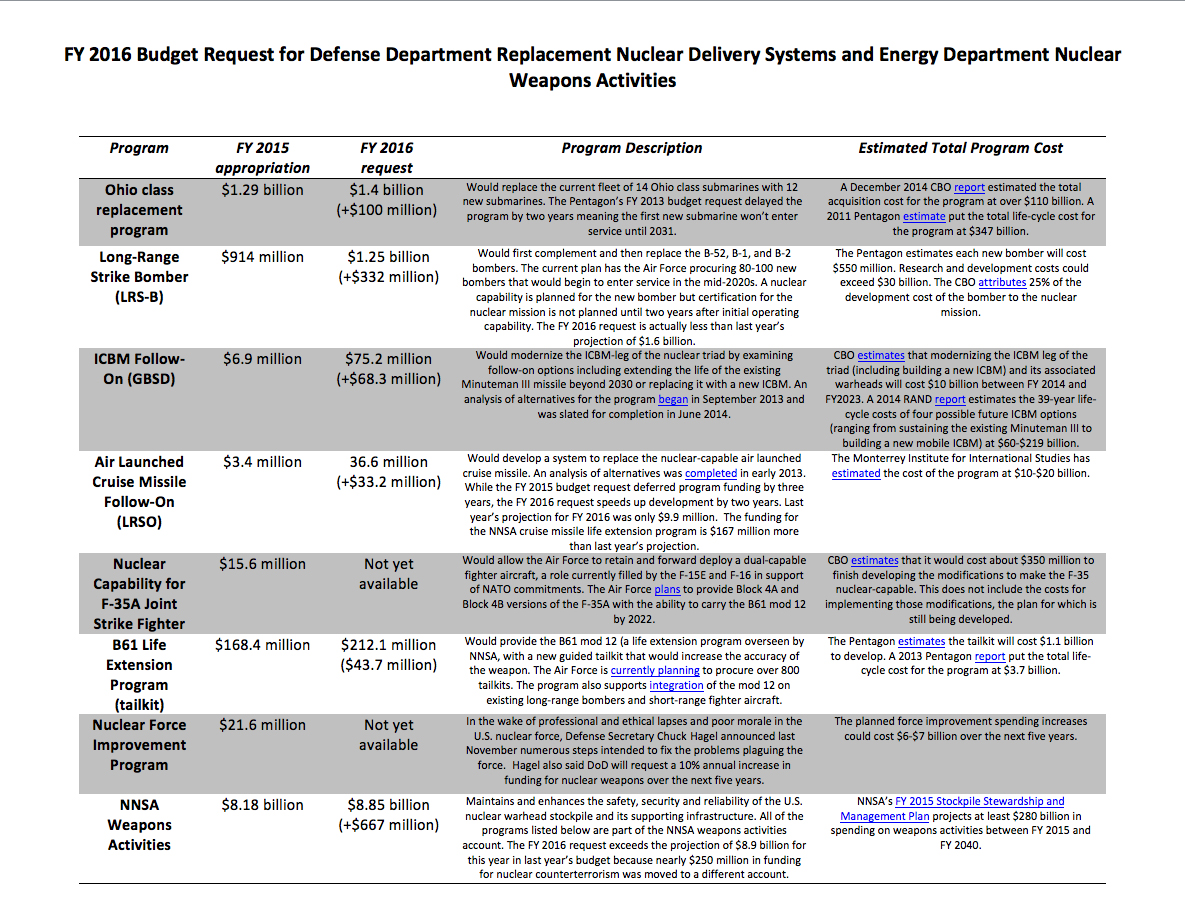 The administration’s budget proposal includes significant increases for several strategic nuclear weapons systems, including increase for some programs above what was projected in the FY 2015 budget request (see the chart). Most notably, the budget accelerates funding for the “Long Range Stand-Off” (LRSO) weapon to replace the nuclear-armed Air Launched Cruise Missile. This new, more advanced cruise missile would be capable of “penetrating and surviving advanced Integrated Air Defense Systems from significant stand-off range to prosecute strategic targets in support of the Air Force’s global attack core function.”

A new report from the Congressional Budget Office (CBO) released on January 22 estimates that nuclear weapons spending will total $348 billion between FY 2015 and FY 2024, or five percent to six percent of the total costs of the administration’s plans for national defense. But this is just the tip of the coming budget bow wave. Over the next 30 years, the bill could add up to $1 trillion, according to recent report of the National Defense Panel Review of the 2014 Quadrennial Defense Review.

The administration’s budget request is a deeply disappointing and a lost opportunity to make common sense adjustments to the current nuclear weapons spending trajectory. What’s more, the spending plans call for a nuclear force that would exceed what the president and Pentagon have determined is necessary to deter a nuclear attack against the United States or its allies.

A Legacy of Nuclear Excess

Given this is the last budget that the administration will both request and implement, part of President Barack Obama’s legacy on nuclear weapons will now be as the president who set in motion plans to remake a nuclear arsenal like the one the United States has today for decades to come. It will be up to future administrations and Congress to adjust the current plans to comport with reduced nuclear requirements and the constrained fiscal environment.

The major increases for nuclear weapons in the administration’s Fiscal 2016 budget request ignore congressional spending caps first imposed by the 2011 Budget Control Act, which places limits on discretionary spending, including military spending. These caps would require significant reductions in military spending from current projections through the end of the decade. The administration’s FY 2016 budget request for national defense exceeds the budget caps by approximately $38 billion. If Congress doesn’t overturn the caps—and it appears unlikely that it will—significant cuts to programs will be necessary.

But just as the administration’s overall defense budget request is divorced from fiscal reality, so too are its nuclear weapons spending plans. The recent National Defense Panel report called the Obama administration’s plans to rebuild the nuclear arsenal “unaffordable” given current budget constrains and a threat to “needed improvements in conventional forces.”

Indeed, the opportunity costs of spending on nuclear weapons are starkly evident in the National Nuclear Security Administration’s budget request. While the request for nuclear weapons is nearly $700 million more than what Congress appropriated in the FY 2015 “cromnibus” bill--and actually exceeds what the administration was projecting as of last year--funding for core nuclear terrorism prevention programs is relatively flat and in some cases below what these programs were projected to receive.

It doesn’t have to be this way.

Last October the Arms Control Association released a report outlining ways to save roughly $70 billion over the next decade across all three legs of the nuclear triad and the warheads they carry. If necessary, these savings can be achieved without further cuts below what is already planned to the still massive number of strategic nuclear warheads deployed on subs, land-based missiles, and bombers – though the President and his military advisors have already determined that the United States has more nuclear weapons than it needs for its security. In June 2013, Obama declared that the United States could reduce its deployed strategic nuclear arsenal by up to one-third below the New START level of 1,550 warheads.

Examples of savings include scaling back plans to replace the Ohio-class nuclear-armed submarines by buying eight new boats instead of twelve. Each is estimated to cost in excess of $7 billion.

The United States could delay plans for building new nuclear-capable long-range bombers, which could cost $80 billion, and rely on its current bomber fleet.

At least $3 billion more can be saved over the next decade by canceling the purchase of a new nuclear-armed air-launched cruise missile. After delaying the schedule for a new cruise missile by three years in last year’s budget request, the FY 2016 submission speeds up the planned deployment of the missile by two years. The request for the missile is nearly $27 million more than last year’s projection while the request for the accompanying Energy Department life extension program is $167 million more than projected.

As it reviews the administration’s budget request this year, Congress has an important responsibility to critically examine the proposed nuclear weapons plans and budgets.

An immediate opportunity to asks tough questions comes on February 4 in the form of the Senate Armed Services Committee’s nomination hearing for Ashton Carter, the president’s nominee to be Defense Secretary.

Among the questions Senators should be asking the Defense Secretary-designee are:

How Much is Enough?

Q. The Pentagon’s 2013 “Report on Nuclear Employment Strategy of the United States” declared “that we can ensure the security of the United States and our Allies [and] partners and maintain a strong and credible strategic deterrent while safely pursuing up to a one-third reduction in deployed nuclear weapons from the level established in the New START Treaty.” While the administration seeks to achieve further reductions via negotiations with Russia, the new strategy would allow reductions below New START with or without Russian reciprocity.

Meanwhile, the United States is currently embarking on a massive rebuild of all three legs of the existing nuclear “triad” of land-based missiles, submarines-based missiles, short- and long-range bombers and their associated warheads. If pursued to completion, these plans would leave the United States with the capacity to deploy more nuclear weapons than required by the new strategy for decades to come.

Is the Proposed Plan Sustainable and at What Cost?

Q. The National Defense Panel concluded that “a recapitalization of the triad” is “under current budget constraints is unaffordable, especially considering that the nuclear deterrent’s supporting infrastructure, command and control system, and other enabling capabilities also require expensive renovations.” Frank Kendall, under secretary of defense for acquisition, technology and logistics, has echoed similar sentiments, stating in December 2014 that “[w]e’ve got a big affordability problem out there with those [nuclear modernization] programs.”