“The Arms Control Association and all of the staff I've worked with over the years … have this ability to speak truth to power in a wide variety of venues.”
– Marylia Kelley
Tri-Valley Communities Against a Radioactive Environment
June 2, 2022
Updated: Iran’s Overdue ICBM

Authored by Greg Thielmann on February 2, 2015 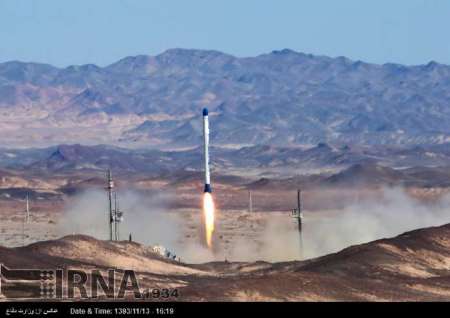 Iran’s launch of a Fajr (Dawn) observation satellite into orbit on February 2 will undoubtedly confuse the debate over whether or not Iran will soon have an Intercontinental Ballistic Missile (ICBM). It should not; this was not an ICBM-related event. The space launch vehicle (SLV) used in this launch appears to have been a modified Safir, which is based on the Shahab 3 medium-range ballistic missile with an operational range of around 2,000 kilometers.

The Simorgh SLV mockup displayed five years ago would, if built, be able to carry a payload 2-3 times heavier than the Safir. But even if an actual Simorgh SLV were flight-tested soon, it would not constitute an imminent ICBM threat against the United States. Although significantly larger than the launcher used for Iran’s latest satellite launch, the Simorgh is still too small to be a prototype of a military version that could carry a weapons payload 9,000+ kilometers to strike the continental United States.

2015 has long promised to be a banner year for the government in Tehran, marking the long-predicted first flight-test of an Iranian intercontinental ballistic missile (ICBM). It now appears increasingly unlikely that this will happen.

Of course, an Iranian ICBM test by 2015 has long been an official forecast of the U.S. and Israeli governments, not the one in Tehran. The Islamic Republic of Iran has long denied an interest in even developing an ICBM and has not flight-tested military missile systems with operational ranges beyond some 2,000 kilometers.

In order for Iran to be able to threaten the U.S. mainland, it would need a delivery vehicle capable of carrying a several-hundred-kilogram-payload approximately 9,000 kilometers, a daunting technological challenge. (The traditional ICBM-range definition of 5,500 kilometers originated from the shortest distance between the United States and the Soviet Union.)

While dismissing any interest in developing nuclear warheads or ICBMs to deliver them, Iran has outlined ambitious plans for building space launch vehicles (SLVs) to send satellites and astronauts into space. Iran’s space program is a proliferation concern because there is considerable overlap between developing SLVs and ballistic missiles. The problem is further aggravated when space programs are run by the military, as is the case in Iran.

There is great skepticism—particularly in the U.S. Congress—that Iran has benign intentions for either its uranium centrifuges or its SLVs. The view expressed by Sen. Robert Menendez (D-NJ) about Iran’s space program during a December 2013 hearing is not uncommon: “it’s well known that [Iran’s space program] is just a cover for military ballistic weapons program.”

Some have pointed to Iran’s Simorgh SLV, shown in mockup nearly five years ago, as the system most easily convertible for use as an intermediate- or intercontinental-range missile. But that rocket has still not flown. While there are indications that large, rocket booster stages have been static-tested in Iran, and the Israeli media has just published reports that a 27-meter-high rocket appears ready to launch, other recent reports suggest major restructuring in or cancellation of Iran’s space program.

It was a 1999 U.S. National Intelligence Estimate on the foreign ballistic missile threat that first warned “Iran could flight test an ICBM that could threaten the United States by 2010.” A majority of the analysts cited in that estimate predicted that such a test would occur by 2015, with the probability ranging from “better than even [chance]” to “very likely.”

The intelligence community eventually slipped the “could” date to 2015 and dropped the “likely” estimate entirely, but it has been reluctant to drop its admonition in recent years that Iran could test an ICBM by 2015. Even so, it has introduced qualifiers to its projection—like “with sufficient foreign assistance”—that render the warning almost meaningless.

2015 remains a particularly popular data point for those who wish to argue for inserting missile limits into the Iran nuclear talks with the P5+1 (China, France, Germany, Russia, the United Kingdom, and the United States) or to make the case for deploying U.S. strategic missile defenses on the East Coast. But outside experts have doubted Iran’s ability to field an operational ICBM during the remainder of this decade.

Now that we have at long last entered the supposed year of the Iranian ICBM, it is time for the intelligence community to take a new look at the available evidence, sharing enough of it with the American people and their representatives in Congress that realistic policy judgments can be reached. The intelligence community estimates should include both what is likely as well as what is possible.

This would allow judicious allocations of severely constrained defense dollars to be made. As importantly, it would permit a more accurate assessment of risk in exploiting promising diplomatic openings in the wake of a possible Iran nuclear agreement.