Authored by Kelsey Davenport on December 2, 2014 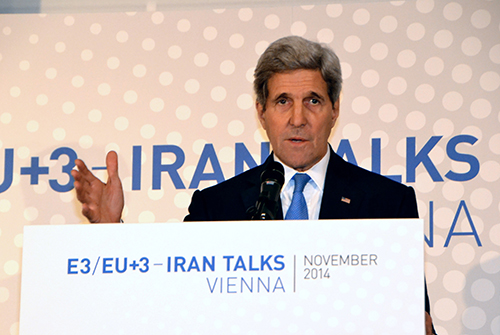 After days of near round-the-clock discussions, negotiators announced Monday Nov. 24 in Vienna that talks between Iran and the P5+1 (China, France, Germany, Russia, the United Kingdom, and the United States) would be extended through June 30.

Their aim is to complete a political agreement within the next four months, with an additional three months to work out the technical details, according to a statement delivered by P5+1 lead negotiator Catherine Ashton and Iranian Foreign Minister Mohammad Javad Zarif late on Nov. 24.

Ashton and Zarif said that negotiators see a "credible path" toward a comprehensive agreement based on the "progress made" during the talks and "the new ideas which continue to be explored."

U.S. Secretary of State John Kerry also spoke to reporters  in Vienna on Monday the 24th. Kerry said that "real and substantial progress" was made, including on some of the "most vexing challenges." Negotiators now see ways forward on some intractable issues, Kerry said, but it will take more time.

Iran's uranium-enrichment capacity and the sequence of sanctions relief continue to be the two of the major sticking points in negotiations on a comprehensive agreement.

The length of the extension took many by surprise, as it opens up an opportunity for critics of an agreement to derail the progress made thus far. In the hours after an extension was announced, several members of Congress released statements urging that additional sanctions be placed on Iran.

Kerry asked Congress to support the extension and said that negotiators have "earned the benefit of the doubt" by producing an agreement that worked and has not been violated by either side.

Kerry praised the success of the interim agreement reached last November, saying that "the world is safer than it was one year ago" and that under the agreement "Iran has halted progress on its nuclear program and rolled it back for the first time in a decade."

Other foreign ministers made statements after the extension was announced, including UK Foreign Secretary Phillip Hammond,

Hammond said that the two sides are building a "much better understanding of what an agreement could look like" that is acceptable to both sides. "Everyone is going to have to show some flexibility" to reach an agreement, Hammond said.

The parties will likely meet again in December to continue their negotiations.

On November 24, 2013, Iran and the P5+1 concluded their interim deal on Iran's nuclear program. The agreement, known as the Joint Plan of Action, requires Iran and the P5+1 countries to take specific steps to freeze and in some areas reverse the progress of Iran's nuclear pursuits in exchange for limited sanctions relief,. It also outlines the broad parameters for negotiating a comprehensive deal.

After three rounds of technical talks to discuss the details of implementing the first-phase of the deal, the two sides agreed to begin implementation on January 20, 2014. The first-phase originally lasted six months, through July 20, 2014, while the negotiators worked on a comprehensive agreement. However, negotiators announced on July 19 that the talks would be extended through November 24.

In a statement released after the talks on Nov. 24, Senators Lindsay Graham (R-S.C.), Kelly Ayotte (R-N.Y.), and John McCain (R-Ariz) said, "we believe this latest extension of talks should be coupled with increased sanctions and a requirement that any final deal between Iran and the United States be sent to Congress for approval."

Israeli Prime Minister Benjamin Netanyahu said in a BBC interview hours before the extension was announced that: "the fact that there's no deal gives us the opportunity to continue the economic pressure that have proven to be the only thing that brought Iran to the table."

Such an approach would be counterproductive and drive Iran away from the negotiating table. The imposition of another round of additional sanctions measures will likely provoke Iran to take escalatory measures, worsen the chances for an effective diplomatic resolution, and lead to yet another Middle East crisis.

It is also contrary to the terms of the November 2013 Joint Plan of Action, which says, "The U.S. Administration, acting consistent with the respective roles of the President and the Congress, will refrain from imposing new nuclear-related sanctions."

If the United States is seen as causing the talks to fail by violating the interim agreement, it could also erode international support for the sanctions regime, which has been vital to its success.

"I hope they [Congress] will come to see the wisdom of leaving us the equilibrium for a few months to be able to proceed without sending messages that might be misinterpreted and cause miscalculation. So my hope is we will have that breadth, and we certainly stand prepared to work with the Congress in every way possible to make sure that everybody's interests are properly listened to, processed, implemented, taken into account. And so I look forward to those discussions when I get back."

March 2015 - Deadline for Iran and the P5+1 to reach a political agreement.