Authored by Kelsey Davenport on November 22, 2014

Approaching the final stretch before the Nov. 24 deadline, it remains unclear as to whether or not Iran and the P5+1 (China, Germany, France, Russia, the United Kingdom, and the United States) will reach an agreement or require more time to get the job done. There is still space between the parties on uranium enrichment and the sequence of sanctions relief under a final deal.

Flexibility will be required to close the remaining gaps. 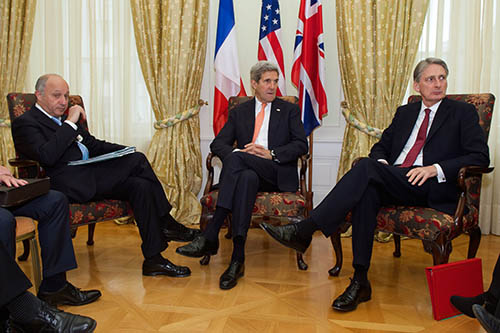 The challenge for the P5+1 and Iranian negotiators is to find sufficient agreement on a range of key issues to meet the divergent core objectives of each side.

For the United States and its negotiating partners, an effective agreement would:

From Iran's perspective, a successful deal will:

There are five main sets of issues that need to be resolved.

Diplomatic sources on both sides of the table tell the Arms Control Association that if the remaining gaps on two or three of the of the critical issues can be resolved, agreement on other items may fall into place, allowing the two sides to reach an agreement in principle. They say that the technical solutions to these issues have been presented and discussed but agreement requires the necessary "political will."

1. Blocking the Uranium Path. Uranium-enrichment process can be used to produce material with lower concentrations of fissionable U-235, or higher levels of enrichment for producing weapons.

The two sides have been struggling to find a formula that establishes verifiable, long-term, sustainable limits on Iran's uranium-enrichment capacity that block Iran from quickly amassing enough fissile material for weapons, while at the same time providing Iran with a politically and technically acceptable enrichment capability "consistent with practical needs."

As part of the 2013 interim nuclear agreement, the two sides agreed to reduce Iran's enriched-uranium stocks and temporarily halt further expansion of its centrifuge capacity, which now stands at about 19,000, of which 10,200 are operational, first generation centrifuges.

Iran's current enrichment capacity exceeds its near-term needs and provides the technical capacity to produce a quantity of weapons-grade uranium gas sufficient for one nuclear bomb (25 kilograms) in about two to three months if such an effort were not detected and slowed or halted.

The P5+1 is pressing Iran to significantly reduce its enrichment capacity for a period of several years in order to increase the time Iran would theoretically require to produce enough weapons-grade material.

If concluded, an effective P5+1 and Iran nuclear agreement very likely will block the uranium path through a combination of measures:

For example, by reducing Iran's current enrichment capacity by half, combined with a significant reduction in the size of Iran's low enriched-uranium stocks and conversion to more proliferation-resistant oxide form (or removal to a third country), would increase the time it would take Iran to produce enough weapons-grade enriched-uranium gas for one nuclear weapon to 12 months or more.

With enhanced international monitoring capabilities, that is more than enough time to detect and disrupt any effort to pursue nuclear weapons in the future.

Over the past several days, the two sides have made some progress to close the gaps but there are still differences that must be bridged.

However, Iran's current needs for enrichment are very limited for the foreseeable future. It has only one operating light-water reactor, which is fueled via a long-term renewable contract with Russia. Iran and Russia just signed a deal for at least two more reactors also to be fueled by Russia.

2. Blocking the Plutonium Path. A comprehensive agreement will need to address the risks posed by Iran's unfinished 40-MWt, heavy-water reactor project at Arak. Iran says it wants the reactor for medical isotope production, but it is also well-suited to produce enough weapons-grade plutonium per year for about two nuclear weapons.

Negotiators on each side are said to agree in principle that the solution will be to modify the design of the reactor-by reducing the power level and/or changing the fuel content and configuration-to drastically cut its annual weapons-grade plutonium output far below what is required for a nuclear weapon. They also agree that Iran shall not build a reprocessing facility that would be needed to separate that material from spent reactor fuel.

3. Blocking the Clandestine Path. Iran's major nuclear sites are already frequently monitored by the International Atomic Energy Agency (IAEA) and very closely watched by U.S. intelligence. However, U.S. intelligence officials have testified since 2007 that if Iran were to make the decision to build a nuclear weapon, it would probably "use covert facilities-rather than its declared nuclear sites-for the production of highly enriched uranium for a weapon."

Blocking the clandestine path to a bomb--also known as "sneakout"--is a top goal for the P5+1. Iran has already agreed to more intrusive IAEA scrutiny of its nuclear sites as part of last year's interim nuclear agreement.

But to guard against "sneakout," it is essential that a more robust international monitoring and inspection system that can help detect and deter potential weapons work at any secret sites is put in place. The only way to achieve this is through a long-term comprehensive nuclear deal.

To achieve the transparency necessary to promptly detect and disrupt any effort to pursue nuclear weapons in the future, even through a potential clandestine program, the Iran and the P5+1 agree that a comprehensive deal will, among other things, require implementation and ratification of the Additional Protocol to the IAEA's safeguards agreement and the Code 3.1 version of the IAEA's Comprehensive Safeguards.

This would require earlier notification of any new Iranian nuclear projects and allow the U.N. nuclear watchdog the authority to inspect, on very short notice, any site that it suspects is being used for nuclear weapons work, whether or not it had been declared as part of Iran's nuclear program. These inspections would include Iran's centrifuge manufacturing facilities and facilities related to providing support and supplies to its nuclear projects. Once ratified, these arrangements would last in perpetuity.

4. Phased Sanctions Removal and the UN Security Council Resolutions. U.S. and international sanctions have helped to bring Iran to the negotiating table and changed Iran's cost-benefit calculus, but sanctions alone have not stopped and cannot stop Iran's nuclear progress.

The two sides continue to haggle the pace and scope of sanctions relief, including how and when the UN Security Council acts to revise UN-mandated sanctions against Iran in connection with its nuclear program.

The P5+1 insist that sanctions should be "metered-out" as Iran meets its nonproliferation obligations and the IAEA's investigation of Iran's nuclear program is wrapped up, perhaps sometime next year or in 2016. If Iran does not meet its obligations, key sanctions measures could be swiftly re-imposed by the president and by the UN Security Council.

Iran has made clear it wants international and U.S.-imposed sanctions removed as soon as possible. President Hassan Rouhani needs to demonstrate that his policy of engagement can deliver sanctions relief, renewed foreign investment, and help improve Iran's economy.

The President Obama can use his statutory authority to reduce many U.S. sanctions imposed by executive order and/or he can invoke legislative waivers on current sanctions legislation. These could be done fairly swiftly and could produce a very substantial windfall for the Iranian economy in the short-term.

Some sanctions, such as those imposed by the "Iran Sanctions Act," sunset on December 31, 2016 and could be allowed to expire.

But Congress will eventually have to vote to remove other sanctions that it imposed by law. Because this could entail a lengthy, politically-charged process lasting many months, sanctions relief could be sequenced to allow the president to issues initial waivers and other measures, leaving congressional legislation for a later stage.

Shortly after the conclusion of a comprehensive nuclear agreement, the UN Security Council will need to adopt a resolution to make the document "binding character," according to Russian Deputy Foreign Minister Sergey Ryabkov.

The UNSC resolution will need to be structured so as to allow for imports for legitimate civil nuclear programs, as they do now for the Bushehr nuclear power reactor, while preventing imports for certain military programs and banned nuclear items for nuclear weapons purposes.

In comments this week, Ryabkov said "at least one" resolution is needed "to approve the future agreement and make it binding."

For a summary of key UN Security Council resolutions and sanctions, see Appendix D of our "Solving the Iranian Nuclear Puzzle," briefing book.

5. The Duration of Key Elements of the Agreement. Any comprehensive nuclear agreement will be a multi-stage, multi-year agreement that specifies action-for-action steps by the P5+1 and Iran.

Some restrictions may last for years, some measures will last decades, and some, like inspection measures under the terms of the IAEA's additional protocol, will be permanent. Overall, the agreement will likely last more than a decade, with certain Iranian commitments lasting well beyond its formal end date.

The Arms Control Association is monitoring the negotiations from Vienna and Washington. Check our blog and Twitter feed @armscontrolnow for the latest.

For interviews with our experts, Nonproliferation Policy Director Kelsey Davenport (@KelseyDav) in Vienna, or Executive Director Daryl G. Kimball (@DarylGKimball), please contact: Tim Farnsworth, Communications Director at 1-202-550-9402 or via email at [email protected], or you may contact reach them through our main office number: 1-202-463-8270.