Authored by Kelsey Davenport on November 21, 2014

And the Ministers Descend....
U.S. Secretary of State John Kerry was the first foreign minister from the P5+1 (China, France, Germany, Russia, the United Kingdom, and the United States) to join the talks in Vienna. Kerry arrived at the Coburg Place last evening for a meeting with P5+1 lead negotiator Catherine Ashton and Iranian Foreign Minister Mohammad Javad Zarif. The meeting lasted over two hours. 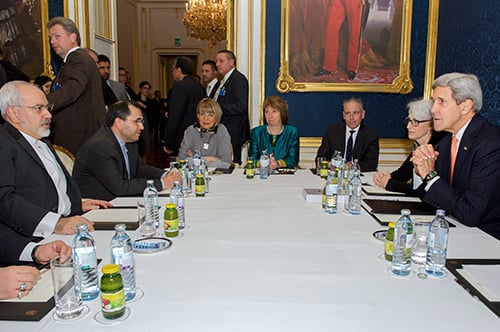 Kerry met with Zarif and Ashton again today. Also on the schedule is the arrival of British Foreign Secretary Phillip Hammond and French Foreign Minister Laurent Fabuis. They will meet with Kerry at 1:00PM and Zarif at 2:00PM at the Coburg.

"We have a very short amount of time. What we are all focussed on now is trying to get the key principles of a deal agreed over the next 72 hours so that we can meet that important deadline," Hammond said in Vienna.

Hammond also said that the P5+1 is willing to show flexibility if Iran is and that an agreement is still possible by Nov. 24.

Your negotiators appear to have disregarded clear expressions from the Senate emphasizing the need for a multi-decade agreement requiring Iran to fully suspend its enrichment and reprocessing activities, to dismantle its illicit nuclear infrastructure, and completely disclose its past work on nuclear weaponization.

Calling for full and permanent suspension of uranium enrichment is unnecessary and unrealistic. What's more, the United States already agreed to a limited, highly-monitored uranium-enrichment program as part of a final deal.

If U.S. policymakers continue to insist that Iran completely abandon a peaceful civilian nuclear program, it will only drive Iran away from the negotiating table, wreck the chances for a diplomatic solution to limit Iran's nuclear capabilities, and endanger U.S. and international security.

Iran should be restricted to producing uranium enriched to civilian power reactor grade. And the amount of uranium that Iran is allowed to enrich should be commensurate with its current "practical" needs, which are very limited-not the nuclear power program Tehran plans to build in the future.

Including these measures in a deal will ensure that Iran could not dash to build nuclear weapons before the international community would detect such activities and be able to block them.

It is also important to get the details right on reprocessing. Iran does not have a reprocessing facility, nor does it intend to build one. Iran committed to forgo reprocessing as part of a comprehensive nuclear agreement.

We see no indication your negotiators are pressing Iran to abandon efforts to develop an intercontinental ballistic missile that could reach American soil. Iran's refusal to seriously address these issues raises fundamental questions about the sincerity of its participation in this process.

ICBMs also should not be part of an agreement. Iran would not agree to limits that no other country in the region is subject to. So far, Iran has never flight-tested a long-range ballistic missile-neither a 5,500 km range ICBM nor a 3,000-5,500 km range intermediate-range ballistic missile (IRBM). Moreover, in striking contrast to its active pursuit of short- and medium-range missiles, Iran has not indicated much interest in developing longer-range systems. It would be appropriate to at least bring these facts into the discussion of when, or if, an Iranian ICBM threat might eventually appear.

Iran's nuclear and missile programs offer many legitimate grounds for concern and they are particularly threatening to many of Iran's neighbors in the region. But, although it is difficult to rule out ominous developments over the horizon, it is time for some more responsible and objective statements about present and imminent dangers to the U.S. mainland.

Unlike some other military systems well suited to clandestine development, ballistic missiles must be repeatedly flight-tested before they are ready to deploy.  And the flight tests of long-range ballistic missiles are and will be tracked and analyzed by the United States.

The U.S. negotiating team has consistently stated that Iran is participating in good faith and is committed to reaching an agreement. Negotiations require compromise, and Iran's instance that its core concerns are met, does not mean that Tehran is insincere about reaching an agreement. Additionally, over the past year, Iran has frozen its nuclear program and taken significant steps to roll back some of its most worrisome nuclear activities.

While complete dismantlement of Iran's nuclear program may have been the most ideal end-state, it is not necessary. A final deal with stringent limits and intrusive monitoring and verification will guard against a nuclear-armed Iran and ensure that there is no covert program.

Iran has stated in the past that it wants to move to more advanced machines, and began installing its second-generation model, the IR-2M, in production scale cascades at its Fuel Enrichment Plant at Natanz. Iran has installed 1,008 of these machines, but they are not yet operating.

Iran is also testing other machines, the IR-4, the IR-5, the IR-6 and the IR-6s. Under a comprehensive agreement, Iran wants to maintain its research and development on advanced machines.

The P5+1, however, is concerned about research on advanced machines. More efficient machines could allow Iran to quickly enrich uranium to weapons-grade using fewer machines.

All of these activities would take place under intrusive monitoring and verification.