Authored by Kelsey Davenport on November 20, 2014

With four days left before the Nov. 24 deadline, negotiators are still pushing for a deal and not discussing extension. Talks are ongoing in Vienna today, including a bilateral meeting between Russia and Iran and various technical meetings.

Over the past three days, negotiators have met in a variety of formats, including several bilateral meetings between Iran and the United States. Media briefings are scarce, and it is difficult to ascertain how much progress is being made behind closed doors. U.S. Secretary of State John Kerry will likely play a critical role when he arrives to join the talks this evening. It has not yet been determined how long Kerry will remain in Vienna. 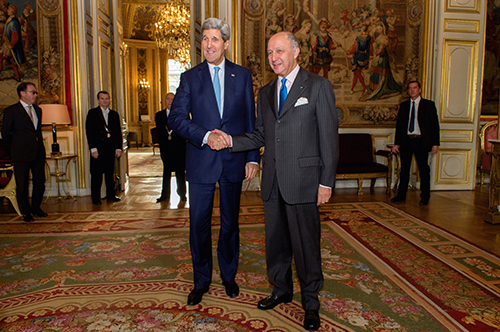 Before his departure, Kerry met in Paris with French Foreign Minister Laurent Fabius and held a joint press conference. Matt Lee of the Associated Press reports that Kerry and Fabius say the P5+1 is "united."  Kerry said, "We agree with France's four ideas for the nuclear talks. We may have minor disagreements but not on the fundamentals."

Fabius added, "Significant points of difference remain" with Iran. Kerry said, "We hope that these gaps that exist, and they do exist, can be closed." The agreement should "not built on trust, built on verification... No one can accept any arrangements that cannot be verified."

"We hope to define the finish line and get there" by Nov 24 deadline, Kerry added.

Iranian President Hassan Rouhani, however, said a deal is possible by the deadline if the west drops its “excessive demands.”

Main sticking points are still the size of Iran’s uranium-enrichment program and the sequence of sanctions relief.

Negotiators remain focused on reaching an agreement by Nov. 24. But with four days left to talk it may not be possible to reach a comprehensive agreement that resolves all of the major issues. While negotiators should remain focused on the deadline, if it is not possible to reach a full agreement, policymakers should support an extension. Walking away from the diplomatic process is not a realistic option at this point for either side.

Broad framework agreement: Negotiators may reach consensus on a broad framework that outlines the main points of a deal but requires further work on technical details. While technical teams have been meeting Vienna, New York and elsewhere frequently over the past months working on these questions, if an eleventh hour deal is struck, it may not be possible to prepare all of the technical annexes in time. Additional time would be required to work out the technical details before implementation can begin.

This would be a similar to the interim Joint Plan of Action reached last year between Iran and the P5+1 (China, France, Germany, Russia, the United Kingdom, and the United States). The deal was struck in November, but implementation began Jan. 20, after remaining technical details were worked out.

Short extension: After Nov. 24, an agreement becomes more difficult. However, walking away from the talks is not an option either side relishes. Nobody wins if the talks fail. If negotiators need more time, policymakers in Washington, Tehran, London, Paris, Moscow and Beijing should support an extension. A short extension would keep the terms of the JPOA in place and perhaps add some additional small measures, similar to the additional commitments made in July.

For the P5+1 this would likely mean releasing additional frozen Iranian assets. For Iran, this could include fabricating more fuel plates out of the stockpile of 20 percent enriched uranium powder, or converting additional uranium gas enriched to less than five percent to powder form. Both of these actions would move enriched uranium further from a form that is more easily enriched to weapons-grade.

The International Atomic Energy Agency (IAEA) Board of Governors is meeting today in Vienna, during which Director-General Yukiya Amano will present the agency's quarterly report on Iran. Iran is still behind in providing information on two areas of activities related to nuclear weapons development, the so-called "possible military dimensions (PMD)." This delay, while serious, should not be used to derail nuclear talks between Iran and the P5+1.

It is within the IAEA's mandate to investigate cases of noncompliance with a state's safeguards obligations and to investigate the potential diversion of civil nuclear work for military activities. The IAEA Board of Governors is charged with taking action on these matters based on the reporting by the agency. The P5+1 does not have jurisdiction to act on these issues.

But both sides understand that the ongoing IAEA investigation of past Iranian activities with possible military dimensions will continue after a comprehensive nuclear agreement is reached. Amano said it will likely take over a year to obtain all of the information from Iran and evaluate the activities as a system before the IAEA is ready to issue an assessment. Iran is more likely to fully cooperate when there are guarantees that sanctions will be on their way to being lifted.

In a comprehensive agreement, the P5+1 can make certain steps (i.e. sanctions relief) contingent on a resolution of the agreement, but the P5+1 and Iran are not negotiating a resolution to the investigation per se.

A comprehensive deal could stipulate that certain sanctions relief measures will only take place if and when the investigation is resolved.

The chief goal for the P5+1 is to structure a comprehensive agreement in such a way that it ensures that:

Some have suggested that without a "full" explanation of Iran's suspected, past weaponization efforts, "it is impossible to fully understand its nuclear capability."

Actually, Iran's nuclear capability is well understood, though clearly, the more the IAEA understands about Iran's past work the better.

Given Iran's history, it should be assumed that Iran's scientists have already acquired information that is important for building nuclear weapons. An IAEA visit to the Parchin site will not likely provide definitive answers as to what went on there and will not erase the knowledge Iran gained by any explosive chamber tests conducted there.

If a "full explanation" means an admission from Iran that its scientists once engaged in work intended to help build nuclear weapons, that is not going to happen. Nor will it erase that knowledge. Insistence on such a confession will only derail negotiations on a comprehensive deal. And a good agreement is the best way to guard against such activities in the future.

Nov. 20 - The Iran Project and The Century Foundation briefing on "Implications of a Nuclear Agreement with Iran," 5:30 p.m., in New York, New York. RSVP