Authored by Kelsey Davenport on November 18, 2014

High-level negotiations between Iran and the P5+1 resume in Vienna today, a week out from the Nov. 24 deadline.

P5+1 lead negotiator Catherine Ashton, Iranian Foreign Minister Mohammad Javad Zarif and the political directors from the P5+1 countries (China, France, Germany, Russia, the United Kingdom, and the United States) are already at the Coburg Palace, where the talks are being held. Zarif and Ashton were scheduled to kick things off with a working lunch. 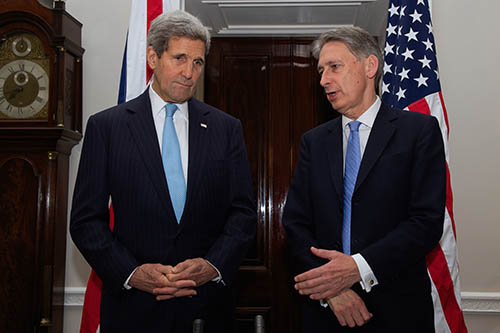 The U.S. State Department announced that Kerry will join the talks later this week. Yesterday, Kerry was in London to brief officials from several Middle Eastern countries about the status of the talks and confer with his European counterparts. After meeting with Kerry, British Foreign Secretary Phillip Hammond said he believed a deal can be done by Nov. 24, but "Iran needs to show flexibility" to get there.

Our sources indicate that the parties are close to agreement on many of the major issues, but gaps still remain on some key issues. These include defining the size and scope of Iran's nuclear program, particularly the number of centrifuges Iran will operate during the duration of the deal, and the sequence of lifting UN Security Council sanctions.

Also, as the P5+1 and Iran gather in central Vienna, the Board of Governors of the International Atomic Energy Agency (IAEA) is convening at its headquarters just across the Wien River on Thursday for its quarterly meeting. Director General Yukiya Amano will present the latest report on Iran's nuclear program.

What the UN Security Council Resolutions Say and Don't

Since July 2006, the Security Council has passed six resolutions calling on Iran to suspend its uranium-enrichment activities, but this call for suspension should not be seen as a barrier for allowing limited uranium enrichment in a comprehensive nuclear agreement between the P5+1 and Iran.

None of the six resolutions call for Iran to dismantle its enrichment facilities or permanently halt enrichment.  All six also contain the same language promoting a diplomatic resolution to the concerns over Iran's nuclear program that respects Tehran's right to a peaceful nuclear program.

Adopted on July 31, 2006, the first UN Security Council Resolution (1696) concerning Iran's nuclear program called for Tehran to "suspend all enrichment-related and reprocessing activities, including research and development, to be verified by the IAEA," within one month's time.

During debate over the first resolution in 2006, Russia's ambassador to the UN, Vitaly Churkin, said the resolutions requirements should be seen as an "interim measure," for the period necessary to resolve the issue.

Churkin's statement is consistent with the language in the resolution, which says that suspension and Iranian compliance with the IAEA would "contribute to a diplomatic, negotiated solution that guarantees Iran's nuclear programme is for exclusively peaceful purposes."

The second resolution, 1737, that the UN Security Council adopted in December 2006 expanded the uranium-enrichment suspension from Resolution 1696 to include "work on heavy water-related project, including the construction of a research reactor moderated by heavy water." The reactor referred to in Resolution 1737 is the Arak IR-40 heavy-water reactor.

Churchkin and ElBaradei's sentiments were echoed through the debate on the most recent resolution in 2010. On June 9, 2010, British Ambassador to the UN Mark Lyall Grant, speaking on behalf of the P5+1, said the resolution was intended to keep "the door open for continued engagement" with Iran over its nuclear program. He said that the purpose of such diplomatic efforts must be to a comprehensive, long-term settlement, that respects Iran's legitimate right to the peaceful use of atomic energy.

The Security Council sanctions were never intended to be permanent-rather, the sanctions are a tool to spur Iran to cooperate with the IAEA's investigation and negotiate an agreement on Tehran's future nuclear program with the international community.

The State of Play

As negotiators approach the final week of talks, they remain focused on reaching a deal by the Nov. 24 deadline. That will require closing gaps on key issues, particularly defining the size and scope of Iran's uranium-enrichment program.

Iran and the P5+1 have already found common ground on many of the other difficult issues.

As of today, here is where the two sides stand on several of the major issues:

But on a number of key issues, the sides are near agreement:

For more detail on what the key issues and potential solutions, see: "Iran Nuclear Deal 101: How A Comprehensive Agreement Can Block Weapons Pathways."

Nov. 19 - The Iran Project and the Atlantic Council briefing on "Implications of a Nuclear Agreement with Iran," 4:00 p.m., in Washington, D.C. RSVP

Nov. 20 - The Iran Project and The Century Foundation briefing on "Implications of a Nuclear Agreement with Iran," 5:30 p.m., in New York, New York. RSVP