Authored by Kelsey Davenport on November 12, 2014

The United States and Iran wrapped up two days of talks on a comprehensive nuclear agreement in Muscat, Oman on Monday. Lead P5+1 negotiator Catherine Ashton joined U.S. Secretary of State John Kerry and Iranian Foreign Minster Mohammad Javad Zarif. A full meeting of the P5+1 (China, France, Germany, Russia, the United Kingdom, and the United States) and Iran at the political director level followed the trilateral session in Muscat on Tuesday. 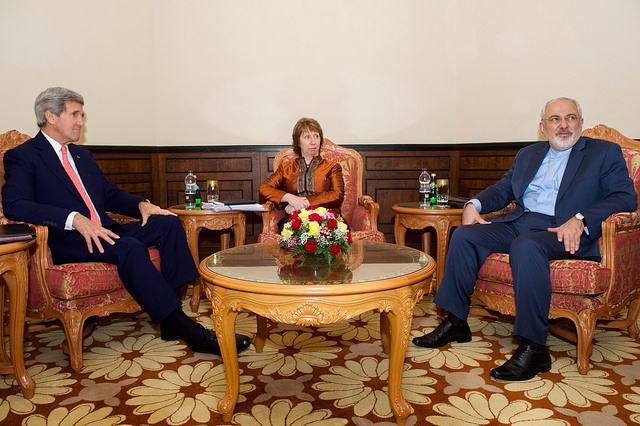 Negotiators did not give much away about what was accomplished during the two days of talks. Although there was no press conference following the meetings, Kerry told reporters during a photo session that the two sides are working hard.

Iranian deputy negotiator Abbas Araghchi told an Iranian news agency on Monday that he was "not in a position to say that we made progress," but that he remained hopeful for a deal by Nov. 24 that reflected agreement on the major issues.

Negotiators will reconvene in Vienna next Tuesday, Nov. 18 to continue talks through the Nov. 24 deadline. The Arms Control Association will be on the ground in Vienna to cover the final week of talks before the deadline and will be sending out daily alerts on the progress in the talks.

Ali Akbar Salehi, chief of the Atomic Energy Organization of Iran, and Sergey Kiriyenko, head of Rosatom State Atomic Energy Corporation, concluded an agreement in Moscow on Nov. 11 to expand nuclear cooperation between the two countries.

The Russia-Iran agreement could help pave the way for a comprehensive P5+1 nuclear deal with Iran because it reduces Iran's "practical needs" for domestic uranium enrichment and will provide Iran with fuel fabrication technology assistance for possible future domestic nuclear fuel requirements.

Under the terms of the agreement, Rosatom will build two additional nuclear powers reactors at the Bushehr Nuclear Power Plant. The fuel for the reactors will also come from Russia for the entire lifespan of the reactors. The plant currently houses one nuclear power reactor, Bushehr I, built and is currently fueled by the Russians through 2021.

Russia also pledged to work with Iran on broader nuclear energy cooperation, including fuel fabrication. Currently, Iran does not have the capacity to fabricate fuel for the Bushehr I reactor, which Tehran has stated it wants to take over fueling in 2021 when the Russian contract ends.

Developing the capacity to domestically fuel Bushehr I has been a stated goal of Iran during talks with the P5+1 on a comprehensive nuclear agreement.

Salehi and Kiriyenko also discussed an additional six nuclear reactors that Rosatom will construct in the future, two more to be built at Bushehr at a later date and four nuclear reactors at a second site in Iran.

The International Atomic Energy Agency (IAEA) issued its quarterly report on Iran's nuclear program, including its compliance with the terms of the Joint Plan of Action (JPOA) that Iran and the P5+1 negotiated last November.

According to the report, Iran is continuing to comply with the conditions of the JPOA. Iran is also on track to meet the additional commitments agreed to when Iran and the P5+1 agreed to extend negotiations in July.

One of these commitments has already been met. Iran told the agency on Aug. 17 it would blend down 4,118 kilograms of uranium enriched to less than 2 percent (also known as "tails" from the enrichment process) to natural uranium. According to the Nov. 7 report, Iran completed blending down this stockpile on Oct. 19.

Iran also agreed to convert another 25 kilograms of uranium powder enriched to 20 percent to fuel assemblies for the Tehran Research Reactor. In total, Iran has produced 162 kilograms of the powder (U3O8) using 20 percent enriched gas.

As of the Nov. 7 report, Iran has converted into fuel plates 17 of the 25 kilograms of uranium powder enriched to 20 percent. This is a positive step and should be completed as soon as possible. Converting the gas to fuel plates makes it more difficult for Iran to further enrich this material to make weapons, should it choose to do so.

The report also says that Iran is continuing to meet with the IAEA regarding two areas of past activities related to nuclear weapons development, or possible military dimensions, but has not yet provided any information or explanations to the agency on these questions. Iran missed an Aug. 25 deadline for giving the agency information about these activities. The IAEA and Iran have continued meeting to work out a way forward on these issues. Iran and the agency reached an agreement last November to resolve all of the agency's outstanding concerns. Iran has provided information on sixteen other issues that are part of the agency's investigation.

An analysis of the IAEA report is available online.

In the interview, Kimball shared his thoughts on what must be accomplished to reach a deal, the key issues that remain to be resolved, and the importance of a comprehensive agreement.

Iran and he P5+1 have worked out solutions on several key issues, including some that appeared to be intractable just a year ago.

A comprehensive nuclear agreement is within reach, but both sides will need to make some tough choices in the coming weeks to reach an agreement by the end of November, particularly on uranium enrichment, which is still a key sticking point in the talks.

There are realistic options available that would meet the bottom line needs of both sides on this key issue. Finding the right combination of measures including curtailing the number of centrifuges for a period of several years, allowing limited research on more sophisticated centrifuges, reducing Iran's stockpile and form of enriched uranium, and providing Iran with fuel supplies in advance for its one operating light-water power reactor at Bushehr, can meet the core concerns of both sides on this issue.

The two sides can and must reach an agreement on this issue in order to conclude a comprehensive nuclear agreement and/or to demonstrate they have made substantial progress and only needs a few additional weeks to hammer out important technical understandings.

To read the full interview, see "A comprehensive nuclear agreement is within reach: arms control expert."

Last week we reported that 62 percent of Americans, both Democrats and Republicans, favor a nuclear deal with Iran. According to a recent poll commissioned by J Street, that number is even higher amongst American Jews.

The survey, conducted last Tuesday, found that 84 percent of American Jews who voted in the midterm elections favor a nuclear deal with Iran that limits its nuclear program and puts in place stringent monitoring measures in exchange for sanctions relief. This deal would include limited uranium enrichment on Iranian soil.

Nov. 19 - The Iran Project and the Atlantic Council briefing on "Implications of a Nuclear Agreement with Iran," 4:00 p.m., in Washington, D.C. RSVP

Nov. 20 - The Iran Project and The Century Foundation briefing on "Implication of a Nuclear Agreement with Iran," 5:30 p.m., in New York, New York. RSVP