Authored by Kelsey Davenport on November 6, 2014

Focused on Reaching an Agreement

The schedule is now set for the last few weeks of negotiations between Iran and the P5+1 (China, France, Germany, Russia, the United Kingdom and the United States) on a comprehensive nuclear agreement before their Nov. 24 target date.

The P5+1 will meet on Nov. 7 for a coordination meeting, followed by a trilateral meeting between the United States, Iran, and lead P5+1 negotiator Catherine Ashton in Oman on Nov. 9-10. Then, all seven countries will return to Vienna on Nov. 18 for talks through the Nov. 24 deadline.

The Arms Control Association will be on the ground in Vienna to provide updates throughout the last week of negotiations. 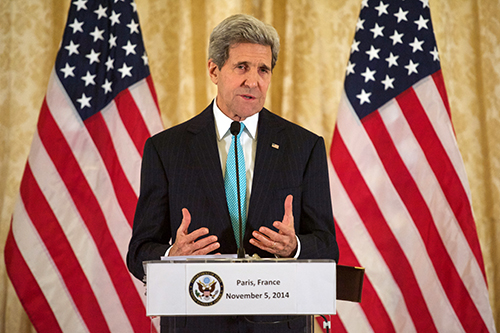 Secretary of State John Kerry reaffirmed that the parties remain focused on reaching an agreement by this date. In remarks to press on Nov. 5 in France, Kerry said that they are not considering an extension, and that a deal "gets more complicated" after the Nov. 24 deadline.

Remarks from sources close to the negotiations hinted earlier this week in Iran that the sequence of sanctions removal is the real obstacle, not the size and scope of the uranium-enrichment program.

In a Nov. 3 report in The New York Times, David Sanger reported that Iran may agree to ship it stockpile of uranium enriched to reactor grade to Russia for storage and conversion into fuel rods for the Bushehr nuclear power reactor.

Shipping out the stockpile as part of a package to limit and monitor Iran's uranium-enrichment program is a significant step that dramatically increases the time it would take for Iran to produce enough nuclear material for one weapon.

Currently, Iran has a stockpile of over 7,500 kilograms of uranium gas enriched to less than five percent, which is a suitable level for nuclear power reactors. But, if further enriched to weapons-grade (greater than 90 percent U-235), this quantity is enough for several weapons.

With the number of operating centrifuges that Iran has right now--10,200 IR-1 machines--and the stockpile of reactor-grade enriched uranium, Iran could produce enough weapons-grade material for one bomb in two to three months. A nuclear deal that requires Iran to reduce its stockpile and centrifuges by about half puts this timeline at 9-12 months. Increasing the timeline to 9-12 months is enough time to detect and deter any attempt to move toward nuclear weapons, should Iran choose to do so. The stockpile reduction is critical to increasing this timeline because with stocks, Iran has to begin enrichment from natural uranium, and that takes more time.

Shipping the fuel to Bushehr also supports Iran's claim that its nuclear program is entirely peaceful and its intentions for producing enriched uranium is to provide fuel for its domestic nuclear power program. And in the form of fuel rods, the enriched uranium poses far less of a threat for further enrichment to weapons-grade levels.

In a Nov. 5 op-ed in the Guardian, a group of prominent former officials argued that failure to achieve a deal is not an option for "responsible leadership" because it will lead to escalation in the region and an unmonitored Iranian nuclear program. They warned that postponing a deal is "likely to provide more opportunities for those opposing the diplomatic track to spoil this process."

The authors, who included three former foreign ministers and the former secretary-general of NATO, said that Europe must do its part to promote "reasonable compromises while steering clear of issues that are not essential to a good deal."

The group of authors includes:

Q: Thank you, Mr. President.  Another deadline coming up is your negotiators by November 24th have to figure out if they're going to reach a deal with Iran on a nuclear area, a nuclear agreement.  I'm interested what your current perspective is on how those negotiations are going.  Also if it is your feeling that you have the power to implement any type of agreement that's reached without any action from Congress?

MR PRESIDENT: On Iran, because of the unprecedented sanctions that we put in place that really did have a crippling effect on Iran's economy, they've come to the table and they've negotiated seriously around providing assurances that they're not developing a nuclear weapon for the first time.  And they have abided by the interim rules.  We have been able to freeze their program, in some cases reduce the stockpile of nuclear material that they already had in hand.  And the discussions, the negotiations have been constructive.

The international community has been unified and cohesive.  There haven't been a lot of cracks in our alliance.  Even countries where we have some differences, like Russia, have agreed with us and have worked with us cooperatively in trying to find ways to make sure that we can verify and have confidence going forward that Iran doesn't have the capacity to develop a nuclear weapon that could not only threaten friends of ours like Israel, trigger a nuclear arms race in the region, but could over the long term, potentially threaten us.

Whether we can actually get a deal done, we're going to have to find out over the next three to four weeks.  We have presented to them a framework that would allow them to meet their peaceful energy needs.  And if, in fact, what their leadership says, that they don't want to develop a nuclear a weapon -- if that is, in fact, true, then they've got an avenue here to provide that assurance to the world community, and in a progressive, step-by-step, verifiable way, allow them to get out from under sanctions so that they can reenter as full-fledged members of the international community.

But they have their own politics, and there's a long tradition of mistrust between the two countries.  And there's a sizeable portion of the political elite that cut its teeth on anti-Americanism and still finds it convenient to blame America for every ill that there is.  And whether they can manage to say yes to what clearly would be better for Iran, better for the region, and better for the world, is an open question.  We'll find out over the next several weeks.

Q: Sir, on whether or not you have the power unilaterally to relax sanctions to implement an agreement?

THE PRESIDENT:  There are a series of different sanctions.  There are multilateral sanctions; there are U.N. sanctions;  there are sanctions that have been imposed by us, this administration, unilaterally.  And I think it's different for each of those areas.

But I don't want to put the cart before the horse.  What I want to do is see if we, in fact, have a deal.  If we do have a deal that I have confidence will prevent Iran from getting a nuclear weapon, and that we can convince the world and the public will prevent Iran from getting a nuclear weapon, then it will be time to engage in Congress.  And I think that we'll be able to make a strong argument to Congress that this is the best way for us to avoid a nuclear Iran; that it will be more effective than any other alternatives we might take, including military action.

But that requires it being a good deal.  And I've said consistently that I'd rather have no deal than a bad deal -- because what we don't want to do is lift sanctions and provide Iran legitimacy but not have the verifiable mechanisms to make sure that they don't break out and produce a nuclear weapon.

How could a effective comprehensive agreement block Iran's potential uranium and plutonium paths to nuclear weapons and increase the international community's ability to promptly detect and disrupt any future effort by Iran to build nuclear weapons?

The Arms Control Association's Issue Brief, "Iran Nuclear Deal 101," outlines the key issues the comprehensive agreement will have to address, effective options for achieving U.S. goals in each area, and a brief discussion of some of the misconceptions that critics and skeptics of a negotiated solution have put forward.

Any agreement that is struck between the P5+1 and Iran should not be evaluated on the basis of how it addresses any single feature. Instead, it should be judged on its overall impact on reducing Iran's nuclear capacity and improving existing capabilities to detect and deter any ongoing or future Iranian weapons program.