Authored by Jennifer Ginsburg on November 3, 2014

Last Monday – October 27 – marked the fifty-second anniversary of a day when the world came staggeringly close to nuclear war. Despite the many decades that have transpired since that fateful date, the story of that day remains a worthy one to re-tell, for all the things that went wrong, the one thing that went right, and for the enduring implications it has for the command and control of nuclear weapons on submarines in today’s world.

On that day in 1962, deep in the Cuban Missile Crisis, a U.S. destroyer began dropping depth charges on a Soviet nuclear-armed submarine with the intention of forcing it to surface even though it was in international waters. The submarine had lost contact with Moscow several days prior and as it dove deeper to try to evade its pursuers it was too deep to receive transmissions. The submarine captain, thinking that World War Three had broken out and all was lost, gave orders for one of the submarine’s torpedoes with a ten-kiloton nuclear warhead to be launched at a nearby U.S. aircraft carrier. 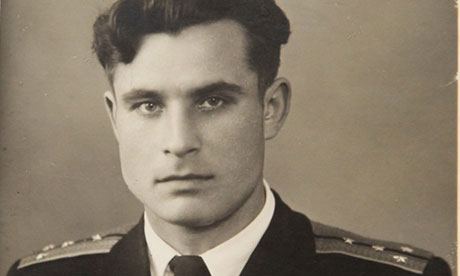 But for the torpedo to be launched, the submarine’s top three commanders had to agree, and one refused. His name was Vasili Arkhipov. Had Arkhipov not disagreed, or if he had been shouted down, the mushroom clouds would likely have quickly spread across the Caribbean and the Atlantic, engulfing the United States, the Soviet Union, and Europe as well, and irrevocably changing human history. It was in the control room of the Soviet submarine, not in Moscow or Washington, that the decision to begin a nuclear war was made, and in that same control room that one man’s decision postponed Armageddon.

Although the idea of one person standing in the way of nuclear war might seem like a Cold War tale and no longer applicable in the 21st century, as more and more countries deploy nuclear-armed submarines, addressing questions of command and control and who ultimately is in charge of decision-making is of the utmost relevance and increasingly urgent.

Due to the nature and purpose of the nuclear-armed submarine (deterrence, survivability of the nuclear arsenal, second-strike capability in times of war), a great deal of responsibility rests on the submarine commanders. For instance, if the submarine were to lose contact with the homeland, it would be up to those commanders to decide if contact was broken due to a technological malfunction, or because the homeland has been obliterated.

Some countries, such as the United Kingdom, continue to have in place the policy where nuclear submarine captains have the authority to launch their missiles if they believe the central command has been destroyed. In the UK’s current system, if the captain believes the chain of command has been compromised, a determination that relies on multiple verifications, the captain opens a hand-written note from the Prime Minister. The content of the note of last resort is at the discretion of the current Prime Minister (and seen by their eyes only) and may order a retaliatory strike, leave it up to the captain, order the captain to place himself under the command of the Australian or American government, or a multitude of other possibilities.

During the Cold War the United States had a similar policy in place, and a submarine captain could launch his nuclear missiles without orders from a higher authority. That changed in the early 1990s. Today the Captain’s Indicator Panel (CIP) key is kept in safes in the command and control center of the submarine. No one onboard knows the combinations to the CIP safes – the combination comes as part of the Emergency Action Message from the National Command Authority in the event that a launch is ordered.

But while the United Kingdom, the United States, and France have well developed command and control systems in place that guard against accidental launch or the captain taking matters into their own hands, it is worth it, for the sake of global security, to question whether other nations who deploy or seek to deploy nuclear-armed submarines have such systems in place.

In the case of both China (which does deploy nuclear-armed submarines), India (which plans to deploy such submarines), and Israel (which is rumored to be deploying such submarines), control of nuclear weapons is split between military and civilian control, with the military in charge of delivery vehicles and the civilian side in control of the warheads. In the case of land-based forces, warheads are only mated with the delivery vehicles in the case of a crisis. But with the introduction of submarines to the equation, such policy needs to be rethought, because in such scenarios such physical separation is not feasible.

To have nuclear weapons at one’s disposal and the ability to use them is an incredible responsibility. If one considers that due to the range and depth of the patrol of a nuclear-armed submarine a technological glitch is not out of the range of possibility, and that such submarines are beginning to cruse through very troubled waters, the probability for very alarming scenarios increases. It is imperative for the international community to think deeply about the implications of sea-based nuclear weapons and how the likelihood of accidental or unauthorized nuclear use rises with the number countries sending submarines on patrol beyond their national territories. In the sixty-odd years of nuclear history, humanity has been extremely lucky. But luck doesn’t last forever.