Authored by Kelsey Davenport on October 31, 2014

The Director-General of the International Atomic Energy Agency (IAEA) Yukiya Amano will be in Washington today, Oct. 31, to talk about the challenges in nuclear verification and the agency's role in monitoring the nuclear deal between Iran and the P5+1 (China, France, Germany, Russia, the United Kingdom, and the United States). You can watch it live, online at 10:30 a.m., Washington time. 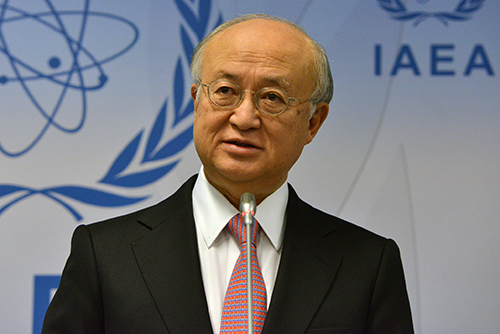 Yesterday, Amano met with U.S. Secretary of State John Kerry to discuss the IAEA's work with Iran and the nuclear negotiations.

Back in Vienna, the technical teams remain hard at work as the clock ticks down to Nov. 24. But there is no word yet on when the political-level talks will resume.

Susan Rice, U.S. national security advisor, said on Oct. 29 that there is less than 50 percent chance of reaching an agreement.

But do not write off the possibility of a deal too soon. There are over three weeks left before Nov. 24; that is a lot of time for diplomacy. And, as UN Deputy Secretary-General Jan Eliasson said on Oct. 29, a nuclear deal will benefit the "entire international community."

But the questions AIPAC puts forward on some issues reveals a lack of understanding about what can and should be achieved in the agreement to prevent a nuclear-armed Iran. For example, on uranium enrichment, AIPAC's memo asks, "[w]ill Iran dismantle its centrifuge infrastructure so that it has no uranium path to a nuclear weapon?" and suggests that the only answer should be "yes."

This question suggests a lack of creativity and unrealistic expectations of a deal. Furthermore, it's unnecessary to guard against a nuclear-armed Iran. Complete dismantlement was sought and failed a decade ago when Iran agreed to temporarily suspend all enrichment work and had only a few hundred operating centrifuges. If the P5+1 or members of Congress tried to hold out for dismantlement of Iran's uranium-enrichment facilities, Iran would not agree, negotiations would breakdown, and Iran would resume efforts to increase its uranium-enrichment capacity. Even if facilities were to be dismantled, the Iranians would still have the technical know-how and ability to eventually develop and build a nuclear weapon, if they chose to do so.

The two sides can and should reach agreement on a formula that establishes verifiable, long-term, sustainable limits on Iran's uranium-enrichment capacity that block Iran from quickly amassing fissile material for weapons. This will require a combination of measures, including curtailing the number of centrifuges for a period of several years, regulating new centrifuge research, reducing the stockpile and form of enriched uranium, and providing Iran with fuel supplies in advance for its one operating light-water power reactor at Bushehr for the duration of the agreement.

AIPAC's point paper also suggests that "shutting down the Arak reactor or converting it to a light-water reactor" is the acceptable way to guard against its possible use for fissile material production. These are not the only, or even the best ways, to block Iran's plutonium path to nuclear weapons.

Iran and the P5+1 agree, in principle, that as part of a comprehensive agreement, the design of Iran's Arak heavy-water reactor project can and should be modified--by reducing the power level and/or changing the fuel content and configuration--to drastically cut its annual weapons-grade plutonium output far below what is required for a nuclear weapon. They also agree that Iran shall not build a reprocessing facility that would be needed to separate that material from spent reactor fuel.

Efforts to set specific "requirements" for exactly how the P5+1 should seek to limit Iran's nuclear potential in one area or another is highly problematic.

Any agreement that is struck between the P5+1 and Iran should not be evaluated on the basis of any single feature. Instead, if a comprehensive deal is reached, it should be assessed on the basis of its overall impact on reducing Iran's nuclear capacity and improving capabilities to detect any ongoing or future Iranian weapons program.

And in the final analysis, serious policymakers in Washington and other capitals must consider whether their country is better off with an effective comprehensive nuclear agreement--or the continued pursuit of an effective deal--than without one. For more on this, see our latest Issue Brief, "Iran Nuclear Deal 101: How a Comprehensive Agreement Can Block Weapons Pathways."

What's in a Fatwa?

Last March, a delegation from the U.S. Conference of Catholic Bishops (USCCB) traveled to the city of Qom in Iran. Well-known in nuclear discourse as the city near the Fordow uranium-enrichment plant, Qom is also the home of an important seminary for Shia scholars and ayatollahs. The USCCB met with several religious leaders and scholars from the seminary, where their discussion focused heavily on the morality of weapons of mass destruction.

While the Supreme Leader's fatwa against the production, stockpiling, and use of nuclear weapons is well-known, its impact is not well-understood in the United States amongst policymakers and the general public, members of the delegation said at an Oct. 29 event at the Carnegie Endowment for International Peace in Washington, D.C.

Speaking at the event, which was co-sponsored by the USCCB and the Arms Control Association, Steve Colecchi, the director of the office of international justice and peace for the USCCB, said that the fatwa is "pervasively taught and defended within Iran" and it cannot be overturned by contradiction.

Colecchi said the fatwa must bee seen in the context of Iranian culture, which is both religious and modern, not the "caricature" of religious fanaticism that is often depicted. Even if Iran's strategic calculations change, the fatwa cannot be overturned and any move to do so would undermine the authority of the Supreme Leader and Iran's religious system, he said. Policymakers must take that into account, Colecchi argued.

According to polling data from the Center for International and Security Studies at the University of Maryland, over 70 percent of Iranians are familiar with the fatwa, and 65 percent agree that the production and use of nuclear weapons is against the principles of Islam.

Bishop Richard Pates, chairman of the USCCB committee on international justice and peace, said that the Iranian delegation was steadfast in its belief that nuclear weapons are immoral because they are indiscriminate weapons that destroy innocent communities.

Pates and Colecchi have met with a number of key administration officials since March to discuss their trip.

Listen to the People - Support a Deal

A majority of the general public in Iran and the United States support a nuclear deal that will allow Iran a limited nuclear program, including uranium enrichment, under strict monitoring, in return for phased sanctions relief.

Polls conducted this summer sample the views of the American and Iranian publics about the on-going negotiations, show clearly that the citizens of the two countries are looking for a long-term solution to the Iranian nuclear puzzle.

The results of the polls conducted by the Centre for International and Security Studies at the University of Maryland indicate that 61 percent of Americans recommended continuing to pursue negotiations on a long-term agreement with Iran that limits their enrichment of uranium while putting in place the necessary checks and balances to ensure Tehran adheres to the agreement. In exchange, Iran should receive some sanctions relief. Interestingly, both Democrats and Republicans who were surveyed--65 percent and 62 percent, respectively--agreed that finding a long-term solution to the Iranian nuclear program is the best option. And as we approach elections next week, Congress should be aware of the public's support for diplomacy.

A solid majority of Iranians, 79 percent, indicate their willingness to support a deal with Iran providing reassurance never to produce nuclear weapons. Slightly smaller majorities are in favor of deal that includes more intrusive international inspections to assure Iran's compliance with the nuclear Nonproliferation Treaty and limits their enrichment capacity to five percent for an agreed period of time.  An equally large majority of Iranians, 70 percent, see dismantlement of a significant portion of Iran's centrifuges as unacceptable.

Diplomats and top officials across both countries must take these views seriously with an eye to reaching a deal by Nov. 24, and if necessary, extending negotiations.