Authored by Jennifer Ginsburg on October 24, 2014

This week marks the 20th anniversary of the signing of the Agreed Framework between the United States and North Korea, an agreement meant to halt Pyongyang’s nuclear program, but one that would unravel before the decade ended.

Over the past two decades the United States has tried a wide range of approaches to curb North Korea’s nuclear ambitions and disarm its nuclear arsenal, but to no avail. Although diplomatic relations between Washington and Pyongyang have remained elusive, continued diplomatic efforts remain the best path forward to deal with the North Korean nuclear threat.

In March 1993, Pyongyang announced it intended to withdraw from the nuclear Nonproliferation Treaty (NPT) after the International Atomic Energy Agency (IAEA) asked for special inspections of North Korea’s nuclear sites, based on concerns that Pyongyang was cheating on its commitments not to pursue nuclear weapons. But later in the year, before it completed the withdrawal process, North Korea proposed to the United States that the two countries enter into negotiations to find a mutually agreeable solution and agreed to greater IAEA access. 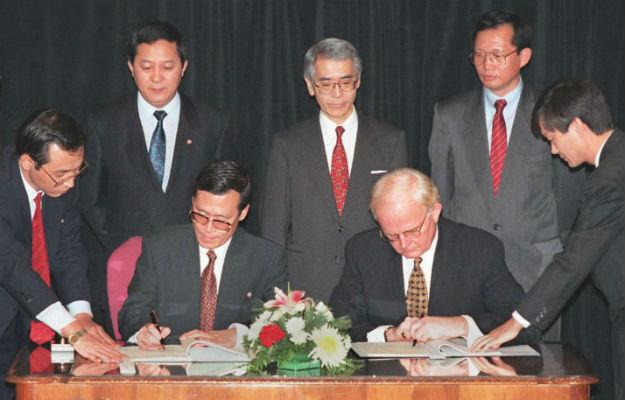 On October 21, 1994 the two countries concluded the Agreed Framework, which aimed to freeze and replace North Korea’s indigenous nuclear power plant program with more proliferation-resistant light-water reactor power plants and to try to normalize relations between Washington and Pyongyang.

The United States viewed the framework as primarily a non-proliferation agreement, but North Korea placed greater value on normalizing relations with the United States in the hopes of getting sanctions lifted. The divergent mindsets with which both countries approached the agreement perhaps contributed to its eventual unraveling. By 2003 the agreement had effectively come undone and North Korea officially withdrew from the NPT. Both countries blamed the other for the agreement’s failure.

On Tuesday, in honor of the anniversary of the signing of the Agreed Framework, the Carnegie Endowment for International Peace hosted a panel of experts to discuss why the agreement broke down and to asses U.S. policy toward North Korea over the past two decades. The panelists–Robert Gallucci, chief U.S. negotiator of the 1994 Agreed Framework, Victor Cha, deputy U.S. head of delegation at the Six Party Talks during the Bush administration, and Sidney Seiler, special envoy for the Six Party Talks under the Obama administration–discussed the past two decades of nuclear diplomacy between Washington and Pyongyang, diplomatic efforts in which they have all played a role. Their combined experience spanned three presidential administrations and their comments offered a window into the rationale behind the policy.

It was generally agreed by the panelists that U.S. policies have not achieved the hoped-for goals, but opinions differed over where the fault lies and how best to proceed forward.  While Gallucci stated outright that U.S. policy toward North Korea has failed, he also stressed the fact that without the framework, Pyongyang’s nuclear arsenal would be much larger today. Had the framework not been concluded, North Korea could have continued to use its 5-megawatt reactor and two others under construction at the time to produce around 200 kilograms of plutonium, enough for around 40 bombs a year.

Cha acknowledged that the policy has been unsuccessful in accomplishing its goals, but he cautioned that saying a policy has failed and saying who is responsible are two very different things. He went on to say that over the past twenty years the United States has tried just about everything, but “if you see someone out there you want to dance with, they have to want to dance with you, and North Korea does not want to dance.”

Seiler defended U.S. policy, saying that Pyongyang’s policy has failed too, in that it has paid a remarkable price for its nuclear weapons program. He added that though North Korea has repeatedly rejected every overture by the United States and it is true U.S. policy has not succeeded, he would not characterize U.S. efforts as a failure.

The panelists provided several different options for future U.S. diplomatic efforts toward North Korea. Gallucci spoke about the importance of bringing in regional allies to show Pyongyang its behavior is unacceptable to the entire global community. Cha said he didn’t think much more could be done on the incentive side, to bring North Korea to the table, but more could be done on the disincentive side and that there is another level of sanctions that the United States could turn to. He pointed out that the sanctions against Iran are more intensive than those against North Korea. He also said there is more that China can do; progress with North Korea occurs when Beijing is involved, and that while China tends to favor the status quo, it is up to the United States to convince Beijing that the current status quo–a proliferating, domestically unstable North Korea–is not in anyone’s favor. Seiler reiterated the Obama administration’s position that for talks with North Korea to be credible, Pyongyang would have to halt its current activities and put disarmament back on the table.

Since it walked out on the global nonproliferation regime in 2003, North Korea has openly pursued nuclear weapons and expanded its arsenal to an estimated 8-12 weapons. Pyongyang conducted three nuclear tests, the most recent in February 2013, and last year, it restarted a reactor to that produces weapons-usable plutonium. North Korea is also making improvements to its ballistic missiles. This expansion of its nuclear and missile programs continue, despite sanctions designed to stifle advancements in these areas.

While denuclearization must remain the long-term goal, it should not be a precondition for getting Pyongyang back to the negotiating table.  The U.S.’s current policy of “strategic patience” is irresponsible. Without talks, the United States has little access to North Korean officials, which provides a valuable source of information on Pyongyang’s activities. Also, as the United States refuses to talk to North Korea until it takes steps to denuclearize, Pyongyang’s missile and nuclear programs continue to grow. In the future, North Korea could pose a larger threat to the region as continued nuclear progress could embolden Pyongyang or urge Seoul to pursue its own nuclear program, and as time progresses, the chance of miscalculation in a conflict or that North Korea might sell nuclear material, technology, or know-how to unfavorable parties rises.

Dismantling North Korea’s nuclear program will likely be a multi-step process, and expecting to accomplish it in one go is not realistic. Rather, perhaps a better approach would be to accept the abandonment of certain parts of the program, or a moratorium on certain activities, in return for improved U.S.-North Korea relations, an official end to the Korean War, and energy and economic assistance from the United States. It is possible that U.S. and South Korean-led negotiations, with a strong Chinese presence, could halt Pyongyang’s nuclear and missile tests, which would be a significant accomplishment and a first step toward future goals.

One reason the Agreed Framework failed (other than the fact that it is likely Pyongyang never really halted its nuclear activities) was that the Republican Congress refused to support it, calling it appeasement. But sound diplomacy is not appeasement, and, indeed, sound diplomacy is the only way to eventually see North Korean disarmament. If negotiations with North Korea resume, support from Congress will be key.

The issues at hand are not easy, but the only way that the North Korean threat will be solved is if the United States continues to try to engage North Korea. The stakes are too high for Washington to walk away.