Authored by Kelsey Davenport on October 23, 2014

Technical level talks between Iran and the P5+1 (China, France, Germany, Russia, the United Kingdom, and the United States) resumed this week in Vienna after negotiators announced last week that they are still focused on reaching a comprehensive nuclear deal by Nov. 24. 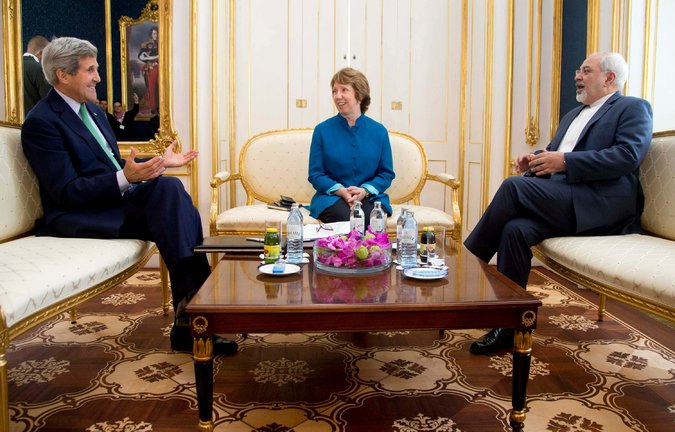 Afterwards, both Iranian and P5+1 officials stressed that a deal is still possible by Nov. 24 and it is too early to be talking about another extension of the November 2013 Joint Plan of Action.

While details were scarce, a senior administration official said Oct. 15 that the negotiators are "chipping away" on some of the remaining issues. Both sides report that they are still working to bridge gaps on the issue of Iran's overall uranium-enrichment capacity, one of the major sticking points in the talks.

Political level talks are expected to resume in November, most likely in Vienna, but an exact date and location has not yet been announced.

With just a month left to go before the Nov. 24 target date, Undersecretary of State for Political Affairs and lead U.S. negotiator Wendy Sherman will speak later today on the nuclear negotiations with Iran at the Center for Science and International Security in Washington.

It should not come as a surprise that during the initial phases of a nuclear deal with Iran, sanctions relief will be granted through presidential waivers, not congressional action. Nor should it come as surprise that Congress is not going to be invited to vote on an agreement.

Yet, according to an Oct. 19 story  in the New York Times by David Sanger, this is news.

Sanger reported that President Barack Obama will do "everything in his power to avoid letting Congress vote" on an Iran deal, if an agreement is reached.

Was a Congressional vote on an agreement between the P5+1 and Iran ever in the cards? No. The nuclear deal with Iran is not a treaty. It does not require a Senate vote to enter into force. And requiring congressional action on sanctions at the outset of a deal is premature and not in the interest of the United States or the P5+1.

Many of the sanctions put in place through laws that originated in Congress provide for presidential waiver authority for national security purposes. A comprehensive nuclear deal with Iran that puts in place limits on Iran's nuclear program and intrusive monitoring and verification measures that would enable the United States and the international community to detect and disrupt an Iranian "breakout" attempt is clearly in the national security interest of the United States.

Phased relief of sanctions, which were put in place to push Iran toward the negotiating table, is a reasonable return for such a deal. Waiving such sanctions in the initial phases of a deal is entirely consistent with what Congress wrote into the legislation in the first place.

If the United States wants to maintain sanctions leverage, sanctions should not be lifted until Iran has demonstrated over a number of years that it is abiding by the terms of an agreement. Then, as the international community gains confidence in the peaceful nature of Iran's nuclear program, Congress can act to lift sanctions.

As long as relief is granted through waivers, Iran also has an incentive to comply with the terms of an agreement. This is in line with what the administration has said repeatedly.

Last Friday, National Security Council spokeswoman Bernadette Meehan said, "the lifting of sanctions will only come when the IAEA [International Atomic Energy Agency] verifies that Iran has met serious and substantive benchmarks. We must be confident that Iran's compliance is real and sustainable over a period of time."

Congress has played an important role in the Iran negotiations. Congress passed sanctions legislation that limited Iran's access to proliferation-sensitive technology and materials and pushed Iran toward the negotiating table. Congress should be kept informed of the status of the negotiations--which the administration has been doing.

But Congress does not need a seat at the negotiating table and members of Congress need to understand the legislation they approved was designed to allow the president to exercise his waiver authority in order to leverage verifiable limits on Iran's nuclear capabilities. To assure Iran that the United States can follow through on a nuclear agreement, Washington needs to speak with one voice at the negotiating table, not 535.

According to the most recent Oct. 20 monthly report from the IAEA, Iran remains in compliance with its nuclear obligations under the Nov. 24 Joint Plan of Action.

Implementation of the agreement, which began in January, has put Iran's nuclear program in a box and put a camera on it.

To recap a few highlights:

The report also indicates that Iran is making progress on the additional commitments it agreed to in July, when the P5+1 and Iran announced that they would extend nuclear negotiations through Nov. 24.

These measures are on track to be completed by Nov. 24. Together, they roll back additional aspects of Iran's nuclear program.

At panel discussion held at the Arms Control Association's annual meeting on Monday in Washington, three leading experts weighed-in on the prospects for an Iran deal.

In case you missed it, here are some highlights from the three-member panel. Complete coverage of the event, including videos and transcripts are online.

Robert Einhorn, senior fellow at Brookings, discussed the progress that has been made to date and the outstanding issues that must still be resolved-namely the size and scope of Iran's uranium-enrichment program. While Einhorn thought it was unlikely that negotiators would reach an agreement by Nov. 24, he emphasized that both sides want a deal, are committed to the talks, and negotiations should continue to try to reach an agreement.

Alireza Nader, senior international policy analyst at RAND spoke on the internal political dynamics in Iran and how they are impacting negotiations. Nader said Iran is likely more flexible on issues like uranium enrichment behind the scenes than it has been in public and that Iran overestimates its leverage in the negotiations. Should talks fail, Nader thinks that the international community and the Iranian public will likely place the blame on Iran and the sanctions regime will remain intact.

Elizabeth Rosenburg, senior fellow at the Center for a New American Security and former Treasury Department official, closed out the panel with a discussion of the complexity of the sanctions regime in place against Iran and the likelihood that initial relief will come through presidential waiver authority. Additional sanctions, at this time or after Nov. 24, risk undermining the prospects of a successful deal, she said.