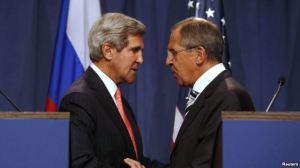 Today, the U.S. Secretary of State John Kerry and Russian Foreign Minister Sergey Lavrov reached agreement on a detailed plan for the expeditious accounting, inspection, control, and elimination of Syria's sizable arsenal of chemical weapons, with provision for enforcement by the UN Security Council.

Among other things, the plan calls on Syria to provide a full declaration of its stockpile "within a week" and "to achieve accountability for their chemical weapons, the Syrians must provide the OPCW, the UN, and other supporting personnel with the immediate and unfettered right to inspect any and all sites in Syria."

One of the next steps will be for the United States and Russia to secure approval of the plan by the OPCW executive council and then a UN Security Council resolution that mandates the implementation of the plan by Syria and other entities. The U.S.-Russian agreement outlined today states that "in the event of non-compliance, including unauthorized transfer, or any use of chemical weapons by anyone in Syria, the UN Security Council should impose measures under Chapter VII of the UN Charter."

"If fully implemented," Mr. Kerry said in remarks this morning in Geneva, "this framework can provide greater protection and security to the world."

We agree. The plan is very thorough and tough. It outlines a thorough series of key steps on an accelerated schedule and provides for enforcement through the UN Security Council--with the authority and influence of both the United States, as well as Assad's patron, Russia.

While there are many further, challenging steps ahead, the agreement is an unprecedented breakthrough that would deny the Assad regime access to this dangerous arsenal and significantly reduce the risk that the government can use chemical weapons (CW) again, either inside Syria or against neighboring states in the region.

The first test of Syrian cooperation will be the delivery of a declaration of its CW stockpile "within a week." It is possible that Assad may try to hide some of his CW stockpile, but it will be difficult for him to do so over the course of the inspections process, which will be aided by U.S. and Russian intelligence on the nature and location and size of the Syrian stockpile-- and there will be consequences if Assad does not cooperate and does not turn over his entire CW arsenal.

Assad's cost-benefit calculation about chemical weapons has already changed: they are now an enormous liability that cannot be used and only through their verifiable elimination can he avoid punitive military strikes that would have the backing of not just the United States, but the UN Security Council.

At this stage, Assad has little choice but to cooperate. Russia is on board this plan, something that was hard to imagine even a week ago. It is an important diplomatic accomplishment for the U.S. and Russia--and for the Obama administration and Secretary of State John Kerry and his team in Geneva.

Framework for Elimination of Syrian Chemical Weapons
Taking into account the decision of the Syrian Arab Republic to accede to the Chemical Weapons Convention and the commitment of the Syrian authorities to provisionally apply the Convention prior to its entry into force, the United States and the Russian Federation express their joint determination to ensure the destruction of the Syrian chemical weapons program (CW) in the soonest and safest manner.
For this purpose, the United States and the Russian Federation have committed to prepare and submit in the next few days to the Executive Council of the OPCW a draft decision setting down special procedures for expeditious destruction of the Syrian chemical weapons program and stringent verification thereof. The principles on which this decision should be based, in the view of both sides, are set forth in Annex A. The United States and the Russian Federation believe that these extraordinary procedures are necessitated by the prior use of these weapons in Syria and the volatility of the Syrian civil war.

The United States and the Russian Federation commit to work together towards prompt adoption of a UN Security Council resolution that reinforces the decision of the OPCW Executive Council. This resolution will also contain steps to ensure its verification and effective implementation and will request that the UN Secretary-General, in consultation with the OPCW, submit recommendations to the UN Security Council on an expedited basis regarding the UN's role in eliminating the Syrian chemical weapons program.

The United States and the Russian Federation concur that this UN Security Council resolution should provide for review on a regular basis the implementation in Syria of the decision of the Executive Council of the OPCW, and in the event of non-compliance, including unauthorized transfer, or any use of chemical weapons by anyone in Syria, the UN Security Council should impose measures under Chapter VII of the UN Charter.

The proposed joint US-Russian OPCW draft decision supports the application of Article VIII of the Chemical Weapons Convention, which provides for the referral of any cases of non-compliance to the United Nations General Assembly and the United Nations Security Council.

We further determined that the most effective control of these weapons may be achieved by removal of the largest amounts of weapons feasible, under OPCW supervision, and their destruction outside of Syria, if possible. We set ambitious goals for the removal and destruction of all categories of CW related materials and equipment with the objective of completing such removal and destruction in the first half of 2014. In addition to chemical weapons, stocks of chemical weapons agents, their precursors, specialized CW equipment, and CW munitions themselves, the elimination process must include the facilities for the development and production of these weapons. The views of both sides in this regard are set forth in Annex B.

The United States and the Russian Federation have further decided that to achieve accountability for their chemical weapons, the Syrians must provide the OPCW, the UN, and other supporting personnel with the immediate and unfettered right to inspect any and all sites in Syria. The extraordinary procedures to be proposed by the United States and the Russian Federation for adoption by the OPCW Executive Council and reinforced by a UN Security Council resolution, as described above, should include a mechanism to ensure this right.

Under this framework, personnel under both the OPCW and UN mandate should be dispatched as rapidly as possible to support control, removal, and destruction of Syria's chemical weapons capabilities.

The United States and the Russian Federation believe that the work of the OPCW and the UN will benefit from participation of the experts of the P5 countries.

The United States and the Russian Federation strongly reiterate their position on Syria as reflected in the Final Communique of the G-8 Summit in Northern Ireland in June 2013, especially as regards chemical weapons.

The two sides intend to work closely together, and with the OPCW, the UN, all Syrian parties, and with other interested member states with relevant capabilities to arrange for the security of the monitoring and destruction mission, recognizing the primary responsibility of the Syrian Government in this regard.

The United States and the Russian Federation note that there are details in furtherance of the execution of this framework that need to be addressed on an expedited basis in the coming days and commit to complete these details, as soon as practicable, understanding that time is of the essence given the crisis in Syria.

Annex A
Principles for Decision Document by OPCW Executive Council
1. The decision should be based on para 8. Art. IV and para. 10 of Art V of the CWC.

2. The decision should address the extraordinary character of the situation with the Syrian chemical weapons.

3. The decision should take into account the deposit by Syria of the instrument of accession to the CWC.

4. The decision should provide for the easy accessibility for States Parties of the information submitted by Syria.

5. The decision should specify which initial information Syria shall submit to the OPCW Technical Secretariat in accordance with a tightly fixed schedule and also specifies an early date for submission of the formal CWC declaration.

6. The decision should oblige Syria to cooperate fully on all aspects of its implementation.

7. The decision should address a schedule for the rapid destruction of Syrian chemical weapons capabilities. This schedule should take into account the following target dates:

A. Completion of initial OPCW on-site inspections of declared sites by November.
B. Destruction of production and mixing/filling equipment by November.
C. Complete elimination of all chemical weapons material and equipment in the first half of 2014.

The shortest possible final deadline, as well as intermediate deadlines, for the destruction of Syrian chemical weapons capabilities should be included into the schedule.

8. The decision should provide stringent special verification measures, beginning within a few days, including a mechanism to ensure the immediate and unfettered right to inspect any and all sites.

9. The decision should address the issue of duties of the OPCW Technical Secretariat in this situation and its need for supplementary resources to implement the decision, particularly technical and personnel resources, and call upon states with relevant capacities to contribute to this end.

10. The decision should refer to the provisions of the CWC obliging the Executive Council, in cases of non-compliance with the Convention, to bring the issues directly to the attention of the UN General Assembly and the UN Security Council.

Annex B
Joint Framework on Destruction of Syrian CW
The Russian Federation and the United States of America agree on the need to achieve rapid elimination of Syria's chemical weapons, thus reducing the threat posed to the people of Syria. They are each prepared to devote high-level attention and resources to support the monitoring and destruction mission of the OPCW, both directly and in cooperation with the United Nations and other States concerned. They agree to set an ambitious goal of eliminating the threat in a rapid and effective manner.

Both parties agree that a clear picture of the state of Syrian chemical weapons could help advance a cooperative development of destruction options, including possible removal of chemical weapons outside of the Syrian territory. We agree on the importance of rapid destruction of the following categories:

The two parties agree to utilize the "universal matrix", developed in the course of consultations by our two National Security Councils, as the basis for an actionable plan.
They agree that the elimination of chemical weapons in Syria should be considered an urgent matter to be implemented within the shortest possible time period.

The parties agree to set the following target dates:
A. Completion of initial OPCW on-site inspections by November.
B. Destruction of production and mixing/filling equipment by November.
C. Complete elimination of all chemical weapons material and equipment in the first half of 2014.
The Russian Federation and the United States will work together closely, including with the OPCW, the UN and Syrian parties to arrange for the security of the monitoring and destruction mission, noting the primary responsibility of the Syrian government in this regard.
###