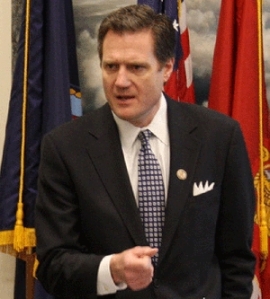 Lawmakers attempting hold New START implementation hostage to budget increases were stuck a serious blow last week when the House and Senate Appropriations committees lined up in support of the administration's decision to zero out funding for the Chemistry and Metallurgy Research Replacement Facility (CMRR) and delay construction of the building for at least five years.

Neither appropriations committee moved to restore any funding for the CMRR when they voted on the fiscal year 2013 budget for the National Nuclear Security Administration (NNSA). The proposed facility is intended to support plutonium pit production activities at the Los Alamos National Laboratory in New Mexico – which NNSA officials now say can be met with existing facilities.

Republican lawmakers, such as Representative Michael Turner (R–Ohio), claim that the administration's decision to cut CMRR violates a commitment made by President Obama during the New START debate to fund "nuclear modernization" at levels outlined in 2010. Since then, the Congress has reduced funding for the administration's budget requests for NNSA weapons activities and Congress approved the bipartisan Budget Control Act. Although the administration's FY2013 $7.6 billion request for National Nuclear Security Administration (NNSA) weapons activities is 4% lower than projected in 2010, it is still 5% higher than the 2012 enacted budget--a large increase in tough budget times.

Nevertheless, in March of this year Rep. Turner introduced legislation which would block New START implementation until the administration certifies that NNSA weapons activities programs are being funded to the projected 2010 levels, including restoration of CMRR's construction budget.

Rep. Turner may offer amendments along these lines to the House defense bill next week, despite testimony from NNSA and the Department of Defense that completing CMRR at this time is not necessary to maintain the nuclear stockpile and fiscally irresponsible, given budget constraints.

The appropriations votes further isolate Rep. Turner's position. Even in the Republican controlled House, there was no move to restore funding for CMRR in committee. The accompanying report requested only that NNSA provide further information on the U.S.'s plutonium strategy during the delay period.

The appropriation passed by each committee also reflected the administration's decision to prioritize construction of the Uranium Processing Facility (UPF) at the Y-12 facility in Tennessee. Both the House and Senate committees recommended the $340 million requested to accelerate UPF construction. The Senate committee report, however, stipulated that $180 million not be made available until the design of the facility was 90 percent complete and the costs and construction schedule for the building are submitted.

The administration received less support in its decision to reprioritize spending on life extension programs (LEPs), which also fall into NNSA's weapons activities account. Two warheads, the W76 and the B61, are currently being refurbished by the NNSA. The W76 warheads are deployed on Ohio-class submarine-launched ballistic missiles; whereas the B61 is a gravity bomb delivered by the U.S. bomber fleet and certified NATO aircraft. While the scope and costs of the B61 LEP have been a matter of Congressional concern in the past, lawmakers disagreed with the administration's decision to slow production of the W76.

In the fiscal year 2013 budget request, the administration indicated that it planned to reduce the production rate of the refurbished warheads and cut the funding request to $175 million. The Senate appropriations committee approved a $30 million increase for the W76 LEP, bringing the appropriation to nearly $205 million. The report language stated that the shift in funding would cause a three-year delay in completing the program. In addition, it said that the administration's justification for the decrease, namely shifting funds to support the B61 LEP, is not an efficient use of funding because the B61 program is already behind schedule.

The House Appropriations committee report also added $45 million to the W76 LEP, bringing its recommended appropriation to $220 million. The report cited the increased funding as necessary to "sustain" the level of production output.

The administration requested $369 million for the B61. The House committee funded the LEP at the requested level, while the Senate recommended an appropriation of $339 million, a $30 million decrease.

The committee report cited carry over balances from the previous year as the reason for the reduction and expressed concern over delays in the B61 LEP schedule, which is preventing a full cost, schedule and scope from being produced for consideration. The report further stipulated that no funding be used for the program until the cost, schedule and scope are submitted by NNSA.