Authored by Greg Thielmann on October 8, 2014

The deployed strategic nuclear arsenals of Russia and the United States increased in size over the last six months, according to the latest data exchange under the New Strategic Arms Reduction Treaty (New START). Taken together, operational U.S. and Russian strategic missile warheads and heavy bombers rose by 188, an amount larger than that possessed by five of the seven remaining nuclear weapons states in their entire arsenals.

The uptick in strategic arsenals revealed by the most recent data exchange constitutes a surprising and troubling milestone at the mid-point for the seven-year reductions period of the treaty.

There is no doubt that Moscow and Washington intend to abide by the weapons ceilings entering into force in 2018, but the new data provides a graphic illustration of missed opportunities for further progress in nuclear arms control. The latest numbers also bode ill for maintaining a healthy interaction between the pursuit of nuclear disarmament and nonproliferation goals at the nuclear Nonproliferation Treaty (NPT) review conference convening in the spring of 2015.

If there is a silver lining in these numbers, it is the reminder they provide concerning the value of New START’s renewal of the U.S.-Russian strategic arms control enterprise.  In addition to assuring continuing modest reductions in overall force levels over the decade and mitigating the negative impact of political crises, the treaty also preserves the framework for bolder cuts whenever political circumstances allow. 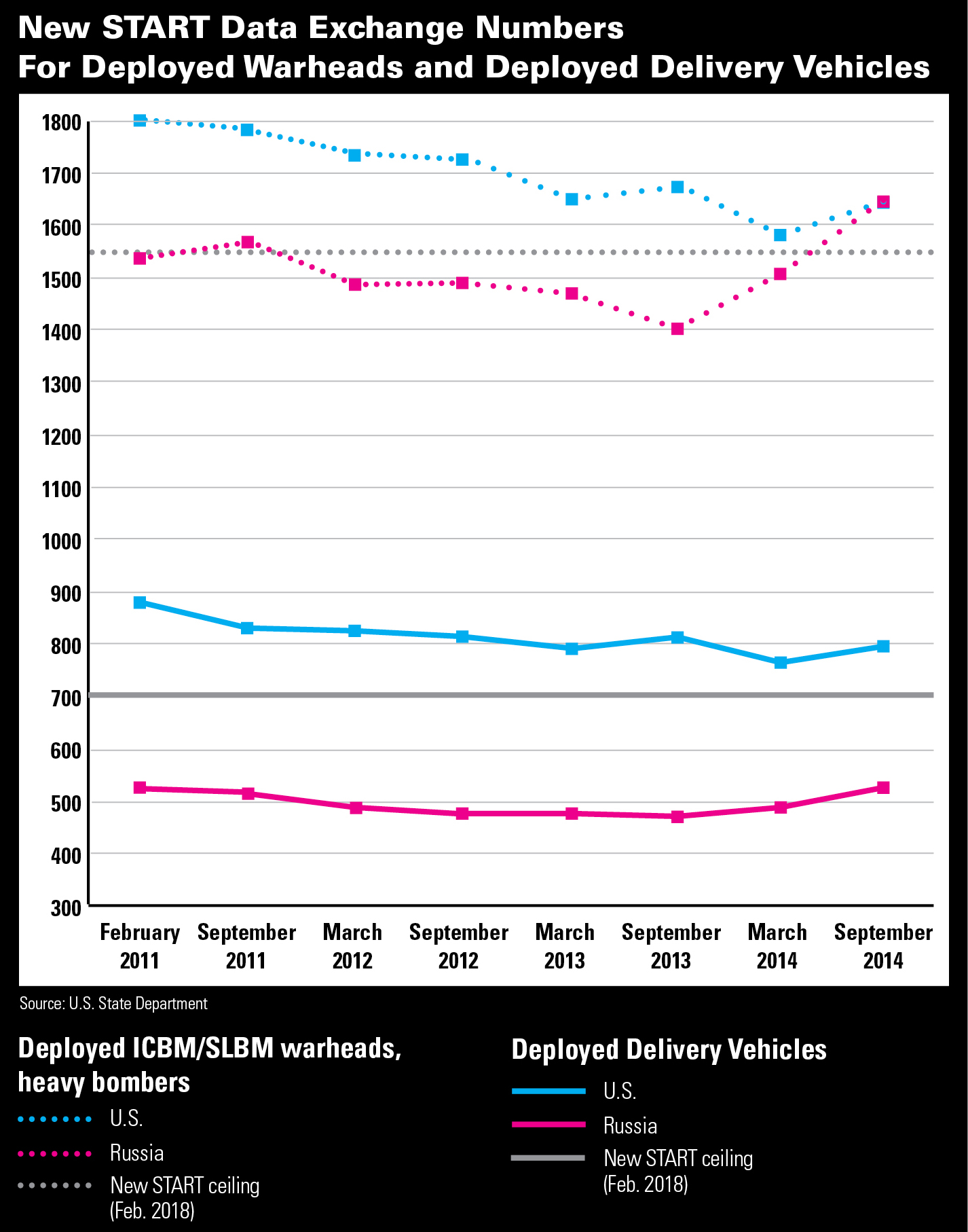 Russia is now even with the United States in two of the three New START weapons categories, including the deployed warheads and bombers count—the measure which receives the most attention and which best reflects overall destructive potential. Russian strategic warheads and bombers rose nearly ten percent (from 1,512 to 1,643) between March 1 and September 1. Comparable U.S. weapons rose by over three percent (from 1,585 to 1,642) during the period.

Numbers were also up in most of the remaining New START weapons categories. The number of U.S. deployed strategic delivery vehicles rose from 778 to 794; comparable Russian systems rose from 498 to 528. Although U.S. deployed and non-deployed delivery vehicles fell from 952 to 912, comparable Russian systems rose slightly from 906 to 911.

There is every reason to believe that the United States and Russia will bring their strategic forces under all three of the treaty’s ceilings before the agreement’s February 2018 deadline. It is also the case that normal events in the maintenance of strategic forces—such as the temporary removal or addition of large deployed sea-launched ballistic missile compliments when submarines enter or exit overhaul—can result in large spikes in the biennial data exchanges that are not representative of long-term trends.

However, President Barack Obama has failed to exploit fully his executive branch prerogatives to accelerate New START reductions. Since completion of the 2010 Nuclear Posture Review and issuance last year of President Obama’s new nuclear policy guidance, it is clear that the military’s targeting requirements can be achieved at warhead deployment levels significantly lower than the New START ceilings.

It should have been possible—and it is still possible—for the United States to accelerate the drawdown of its deployed warheads and bombers. Once individual missile launchers have been designated for dismantlement, their warheads could have been--and can still be--removed relatively quickly to reach the 1,550 ceiling.

For its part, Russia has spurned the Obama administration’s June 2013 offer to reduce the two sides’ arsenals by one-third below New START levels, foregoing an opportunity to lock in future force levels during the next decade that would allow Moscow to reap considerable savings. Russian President Vladimir Putin acknowledged in August that Russia’s military modernization program would require “an enormous amount of money—up to 20 trillion roubles—which has yet to be invested.”

In the meantime, during the period leading up to the treaty’s February 2018 deadline, Russia has apparently chosen to maximize the number of missiles and warheads. It is no secret that many of Russia’s Cold War-vintage, warhead-heavy ICBMs (SS-18s and SS-19s) will be exceeding their already extended service lives. Retaining these systems in the force even after newer replacement missiles are deployed accounts for much of the increases in the warhead totals of the latest data exchange. Holding on to the older systems has negative effects on strategic stability because it means Russia will be relying on more vulnerable fixed-site systems for a large percentage of its warheads.

The 1970 NPT is the keystone of international efforts to control and reverse the international nuclear weapons threat. But many countries have long questioned the bona fides of Russia and the United States in implementing the treaty’s NPT Article VI disarmament obligation, a skepticism that is especially evident at the deliberations of the NPT review conference every five years.

The Final Document of the 2010 NPT Review Conference “affirm[ed] the need for the nuclear-weapon States to reduce and eliminate all types of their nuclear weapons and encourage[ed], in particular, those States with the largest nuclear arsenals to lead efforts in this regard.” But instead of putting on the brakes as they head around the bend toward next spring’s NPT review conference, Moscow and Washington appear to be leaning on the nuclear weapons throttle. Ignoring their commitment in the Final Document “to accelerate concrete progress on the steps leading to nuclear disarmament” puts these countries on a diplomatic collision course at the 2015 NPT Review Conference.

The failure to move forward expeditiously on shrinking U.S. and Russian nuclear forces encourages other nuclear powers to expand their arsenals. Moreover, non-nuclear-weapons states will be less likely to support tougher nonproliferation measures and more likely to spin their wheels on disarmament endeavors, such as premature pursuit of a worldwide nuclear weapons ban.

There is, however, one benefit to the startling data exchange figures released in Washington and Moscow last week. They make very clear that the critics of New START were mistaken in 2010. And it underscores that those advocating the halt of New START implementation as retaliation for Russian actions in Ukraine or for the alleged violation of the Intermediate-Range Nuclear Forces Treaty are wrong now.

Without the verification provisions and sensitive inspections brought into force with the treaty, we would only be seeing these developments dimly, if at all. Absent precise, treaty-generated information, the intelligence agencies on both sides would end up exaggerating the actual dimensions and implications of the uptick by applying prudent, worst-case analyses. Current confidence in being able to project the upper bounds of Russian forces through 2020 would dissolve. And there would be strong pressure on both sides to further augment existing nuclear forces.

Even as political developments put pressure on Moscow and Washington to demonstrate strength and resolve, there are strong inhibitions against doing so outside the bounds of New START. As happened during various Cold War crises, implementing equitable and verifiable U.S.-Russian strategic agreements helps to constrain further deterioration in the bilateral relationship. So as disappointing as the latest data may appear in view of what could have been, it is encouraging that accurate data continues to be available in the service of what could yet be.