China is accelerating its development of strategic nuclear warheads in an effort to amass 700 by 2027 and 1,000 by 2030, more than doubling last year’s estimate, according to the U.S. Defense Department’s 2021 China military power report. 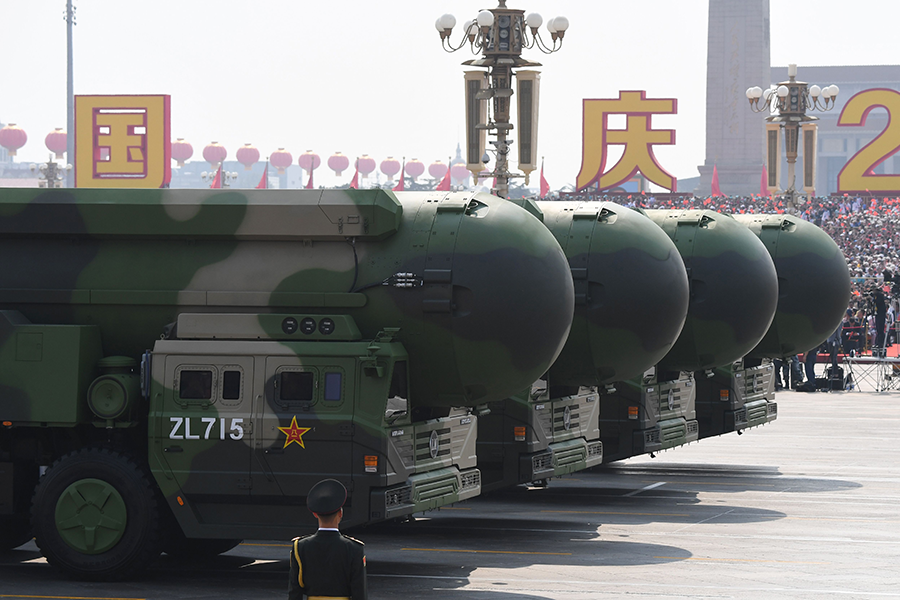 Viewed alongside recent revelations about the construction of at least 250 new missile silos in northwestern China, the annual report highlights a concerning nuclear buildup. Last year, the Pentagon estimated that Beijing had a total nuclear warhead stockpile in the low 200s and projected it would at least double over the next decade. (See ACT, October 2020.)

China is “investing in, and expanding, the number of its land-, sea-, and air-based nuclear delivery platforms and constructing the infrastructure necessary to support this major expansion of its nuclear forces,” according to the report, which covers developments through 2020.

Responding to the report’s release, State Department spokesperson Ned Price reiterated that the Biden administration has sought to engage China on arms control. “We think all responsible countries that have [nuclear] weapons should engage in an arms control dialogue,” he told a Nov. 4 press briefing. “We remain ready and willing to do that, and we’ve made that known to [Chinese] authorities.”

President Joe Biden also raised the possibility of opening a strategic stability dialogue with China, to include nuclear issues, during a virtual summit with Chinese President Xi Jinping on Nov. 15.

“The two leaders agreed that we would look to begin to carry forward discussions on strategic stability,” National Security Advisor Jake Sullivan told a virtual event at the Brookings Institution the following day. Such a dialogue will need “to be guided by the leaders and led by senior empowered teams on both sides that cut across security, technology, and diplomacy,” he added. “It is now incumbent on us to think about the most productive way to carry it forward from here.”

Beijing repeatedly rejected Trump administration demands to join trilateral arms control talks with Russia and also rebuffed previous calls by the Biden administration to open a bilateral strategic stability dialogue. The Biden-Xi virtual summit seemed to suggest that Beijing now is at least willing to consider the possibility of dialogue.

“The Defense Department report, just like similar reports in the past, disregards facts and is filled with bias,” Chinese Foreign Ministry spokesperson Wang Wenbin said on Nov. 4. He emphasized that China “actively advocates the ultimate complete prohibition and thorough destruction of nuclear weapons.”

China has an estimated 350 nuclear warheads, according to the Federation of American Scientists. The United States and Russia have at least 10 times more, with estimated stockpiles of 3,800 and 4,500 warheads, respectively.

The report also comments on recent revelations that China is constructing at least 250 new long-range missile silos at as many as three locations in its northwestern region. (See ACT, September 2021.) Beijing “is building hundreds of new ICBM [intercontinental ballistic missile] silos and is on the cusp of a large silo-based ICBM force expansion comparable to those undertaken by other major powers,” says the report.

Whether China plans to fill every silo with a missile and how many warheads each missile might carry remains uncertain. At the moment, Beijing possesses approximately 100 ICBMs, which can be silo based or road mobile.

As with the report covering 2019, the 2020 report concluded that China aims to deploy roughly 200 warheads on ICBMs within the next five years, as well as to continue expanding its inventory of more than 200 DF-26 ground-launched, intermediate-range ballistic missiles capable of delivering nuclear and conventional warheads.

In 2020, Beijing also began to deploy the dual-capable hypersonic glide-vehicle system paired with a medium-range ballistic missile, known as DF-17. The Pentagon report did not comment on the allegation by U.S. intelligence sources that China tested in July a nuclear-capable hypersonic glide vehicle, carried on a rocket, that flew through low-orbit space and circled the globe before striking within two dozen miles of its target. (See ACT, November 2021.)

China’s nuclear expansion “is certainly something that’s very concerning to us,” a senior U.S. defense official told reporters ahead of the report’s publication. It “raises some questions about their intentions, because it’s one thing to observe what they’re doing, but they haven’t explained why they’re doing it.”

Caitlin Talmadge, an associate professor of security studies at Georgetown University, echoed this concern, telling the Financial Times on Nov. 3, “If this was an emoji, it would be the ‘eyes popping’ emoji.”

Yet, Rose Gottemoeller, former U.S. undersecretary of state for arms control and international security and chief U.S. negotiator for the 2010 New Strategic Arms Reduction Treaty, emphasized during a Nov. 17 event at the Arms Control Association that “there is no need to panic.” China has “a long way to go to catch up with the United States,” she said.

The report notes that Beijing plans to carry out the expansion by increasing its capability to produce and separate plutonium, which can be used as fissile material for nuclear weapons, through the construction of fast breeder reactors and reprocessing facilities.

James Acton of the Carnegie Endowment for International Peace expressed skepticism about this conclusion. Although it is “quite likely” that China will restart fissile material production, “I am not convinced by the argument in [the report] that it has already decided to do so,” he tweeted on Nov. 3.

Restarting production will require Beijing to master difficult technologies and carry “significant technical risk,” Acton wrote. “It doesn’t seem all that attractive from a military perspective.”

The report found that China has “possibly already established a nascent ‘nuclear triad’ with the development of a nuclear capable air-launched ballistic missile…and improvement of its ground- and sea-based nuclear capabilities.”

As in 2020, this year’s report highlights speculation among Chinese strategists that Beijing may need “lower-yield nuclear weapons in order to increase the deterrence value of [its] nuclear force,” although they have not defined specific nuclear yield values. China is not known to have fielded any low-yield nuclear weapons.

But the report notes “some ambiguity about conditions where Beijing’s no-first-use policy would no longer apply.” Some Chinese military officers have discussed using nuclear weapons first in cases when a conventional attack threatens the survival of China’s nuclear forces or of the country itself, the report said.

Although Beijing says it maintains an arsenal “at the minimum level required for national security,” the report suggested that the Chinese arsenal can more accurately be called a “limited deterrent,” which Chinese military officials have described as a level between a minimum and maximum deterrent.

“I do worry they’re going away from minimum deterrence because every indication is they are,” Gen. John Hyten, vice chairman of the Joint Chiefs of Staff, told reporters on Oct. 28. “You don’t need to develop the kind of capabilities they’re developing for minimum deterrence.”

The report states that China “intends to increase the peacetime readiness of its nuclear forces by moving to a launch-on-warning…posture with an expanded silo-based force.” Beijing likely views this posture as compatible with a no-first-use policy, the report added.

It is not established that Beijing has applied this approach to the majority of its forces, as the launch-on-warning posture appears primarily associated with exercises at this stage. The report also found that China “almost certainly keeps the majority of its nuclear force on a peacetime status—with separated launchers, missiles, and warheads.” With nuclear warheads separated from delivery vehicles, Beijing would require extra time to prepare its nuclear forces for launch.

Some experts say China’s nuclear expansion reflects concerns about U.S. missile defenses. But Tong Zhao, a Beijing-based senior fellow at Carnegie, argued in a Nov. 15 op-ed for The New York Times that, although technically correct, such an assertion “misses the bigger geopolitical picture.”

“It’s clear to me that Beijing’s nuclear buildup is ultimately an attempt to force Washington to drop the perceived strategic assault and accept a ‘mutual vulnerability’ relationship—in which neither country would have the capability or will to threaten nuclear war without risking its own destruction,” Zhao wrote.

China’s evolving capabilities are geared toward strengthening its ability to “‘fight and win wars’ against a ‘strong enemy,’” a likely euphemism for the United States, the report concluded, as well as to “coerce Taiwan and rival claimants in territorial disputes, counter an intervention by a third party in a conflict along [China’s] periphery, and project power globally.”