Iran continues to block International Atomic Energy Agency (IAEA) inspectors from accessing a nuclear facility and installing new surveillance equipment. Reports that Iran has resumed operations at the facility, which produces centrifuges for enriching uranium, heightens concerns about gaps in data that could complicate the agency’s monitoring efforts if the 2015 nuclear deal is restored. 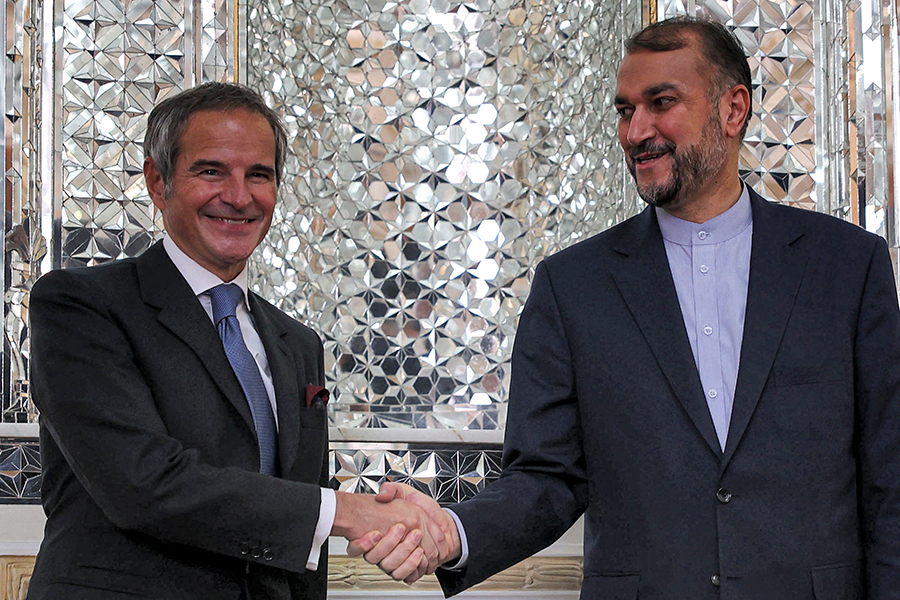 A Nov. 17 report from the IAEA noted that inspectors tried to access the Karaj centrifuge component production facility once in September and twice in October to install new surveillance cameras. Each time, Iran prohibited inspectors from entering the facility.

IAEA Director-General Rafael Mariano Grossi traveled to Tehran for talks on Nov. 23 aimed at addressing the access issue. In a press conference the next day, he said the meetings were constructive but inconclusive. Grossi said that the trip, which included talks with Iranian Foreign Minister Hossein Amirabdollahian, was indispensable for exchanging views but that the agency and Iran could not resolve the access issue and were running out of time. “We must reach an agreement,” Grossi said, “the issues are very, very important.” He said no further meetings are scheduled, but he would remain in contact with Amirabdollahian.

In a Nov. 23 statement, Amirabdollahian said Iran seeks “constructive interaction” with the IAEA.

IAEA inspectors have not had access to Karaj since Iran suspended the intrusive agency inspections required by the nuclear deal, known as the Joint Comprehensive Plan of Action, in February. Under a special arrangement, IAEA cameras were continuing to collect data that would be handed over to the agency if the nuclear deal is restored. (See ACT, March 2021.)

Iran removed the four cameras from the Karaj facility in June, following an apparent sabotage attack on the site that Tehran blames on Israel. In an Oct. 28 letter to the agency, Iran said it had no legal obligation to allow inspectors to replace the cameras and was “investigating whether the terrorists have used the agency cameras to launch an attack on the complex.”

In the Nov. 17 report, Grossi said he “categorically rejects the idea that agency cameras played a role in assisting any third party to launch an attack” on the facility and offered to allow Iran to inspect the cameras in the presence of IAEA officials. He reiterated that Karaj was included in a special IAEA-Iranian arrangement on Sept. 12 allowing inspectors to replace the data storage on surveillance cameras at various sites.

The IAEA said in its report that it could not verify if production of centrifuge components had resumed at Karaj, but officials quoted in a Nov. 16 article in The Wall Street Journal said that Iran had resumed activities at the facility and produced parts for about 170 centrifuges since August. The IAEA report confirms that Iran installed new centrifuges at its Natanz and Fordow enrichment facilities since the prior report in September, but does not indicate where the centrifuges were produced.

Grossi stressed in October the importance of the IAEA resuming monitoring at the site prior to the resumption of centrifuge production to prevent further gaps in the IAEA’s knowledge about the facility.

Although The Wall Street Journal article said there was no evidence that Iran was diverting centrifuges from Karaj for covert activities, a gap in the monitoring could complicate agency efforts to account for all the components produced at the facility.

If the IAEA cannot reconstruct the facility’s history, speculation that Iran is engaged in covert activities could undermine efforts to restore the nuclear deal and complicate the agency’s efforts to resume implementation of the monitoring and verification mechanisms.

The lack of access to Karaj is “seriously affecting the agency’s ability to restore continuity of knowledge at the workshop, which has been widely recognized as essential” if the IAEA is to resume monitoring under a restored nuclear deal, the report said.

At the Nov. 24 press conference, Grossi said the IAEA is “close” to the point where it will not be able to maintain continuity of knowledge.

A second report issued by the IAEA on Nov. 17 indicated that Iran also is not cooperating with an ongoing two-year-old investigation into the presence of nuclear materials found at four locations outside of Iran’s declared nuclear program sites.

The IAEA assessment of the uranium particles at three of the locations indicates that the materials and activities date to 2003, when the IAEA assesses Iran had an organized nuclear weapons program, and are not continuing. Iran’s failure to explain satisfactorily the presence of uranium at undeclared sites suggests Iran violated its safeguards obligations.

The second report warned that the “lack of substantive engagement” in resolving these issues “seriously affects the agency’s ability to provide assurance of the exclusively peaceful nature of Iran’s nuclear program.”