An unusual mix of issues from the bombing of a school bus full of children in Yemen to alarm about possible 3D printing of untraceable guns is fueling controversy over the Trump administration’s promotion of conventional arms sales and military support. Yet, the administration seems poised to resist opposition to its practices coming from Congress and elsewhere. 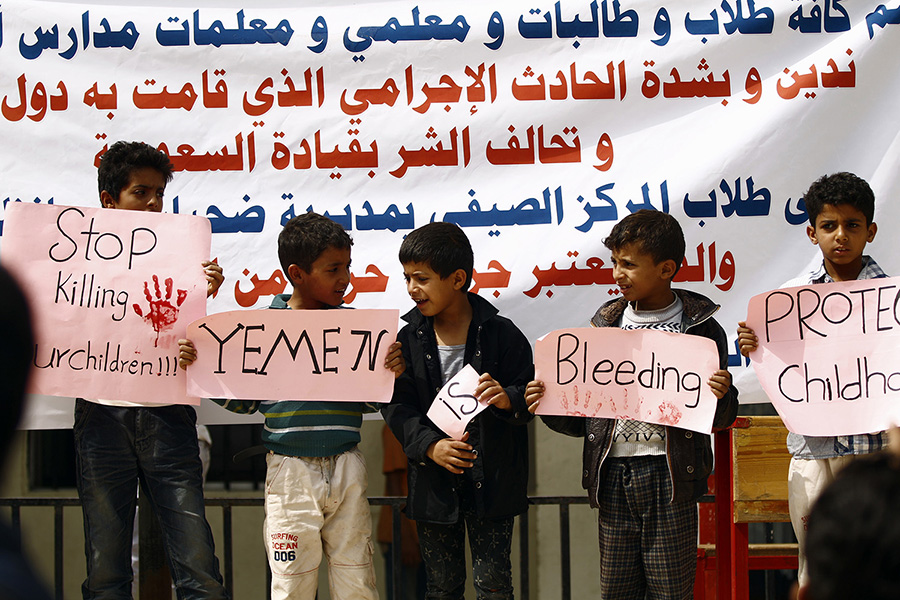 Even before the Aug. 9 bombing in Yemen using U.S.-supplied weapons killed more than 50 people, including more than 40 children, congressional leaders were seeking answers to their questions about the propriety of U.S. military support for the coalition led by Saudi Arabia and the United Arab Emirates that has frequently hit civilians and civilian infrastructure in its fight against the Houthi forces.

Following a string of congressional battles on arms sales and assistance (See ACT, April 2018.), Congress included a provision in the fiscal year 2019 National Defense Authorization Act that requires the secretary of state to certify within 30 days that Saudi Arabia and the UAE are complying with U.S. laws on weapons use and “taking appropriate steps to avoid disproportionate harm to civilians and civilian infrastructure.”

But President Donald Trump indicated his belief that he may not be bound by the requirement. In his Aug. 13 signing statement on the authorization legislation, Trump explicitly listed the provision as one among many that “encompass only actions for which such advance certification or notification is feasible and consistent with the President’s exclusive constitutional authorities.”

A separate action related to international arms regulation garnered widespread domestic opposition and drew a temporary restraining order from a U.S. district court judge in Washington state. In 2015 the State Department ordered an organization called Defense Distributed to remove online instructions for the 3D printing of firearms because such digital files created an export that is controlled under the International Traffic in Arms Regulations (ITAR).

Despite winning court challenges to its authority, the State Department settled the case on June 29, and it published a notification on July 27 that Defense Distributed would be exempt from licensing requirements.

During July, opposition to the settlement included a legal challenge to block the administration’s actions filed by 19 states and the District of Columbia. Judge Robert S. Lasnik of the U.S. District Court for the Western District of Washington granted a temporary restraining order July 31 that led Defense Distributed to take down its online publications and the State Department to remove the exemption. The Justice Department filed a brief Aug. 15 calling on the judge to lift the injunction, but on Aug. 27 he extended the order as a preliminary injunction.

A separate administration effort might result in the same deregulation of 3D firearm printing, but the results are not expected until next year. The public comment period closed July 9 on proposed changes to how semiautomatic and nonautomatic firearms and their ammunition are regulated. (See ACT, June 2018.) The transfer of such weapons from the State Department-controlled U.S. Munitions List to the Commerce Department-led Commerce Control List drew more than 6,000 comments, many of them negative.

Leading gun control and human rights organizations weighed in against the proposal, including Amnesty International USA, which wrote that the changes increase “the risk that irresponsible brokers of small arms and light weapons could evade regulation, and arms will be diverted to states or non-state actors with poor human rights records.”

The final rule is not expected until 2019, but the Commerce Department would not be expected to block online publication of 3D printing instructions under the circumstances of the Defense Distributed case. The Commerce Department would be expected to protect a commercial copyright, but Defense Distributed is actively working to publish material online rather than seeking such protection.

In addition to the provisions in the defense authorization law, members of Congress are taking other steps to circumscribe the administration’s actions involving sales of weapons for use in the Yemen war. Sen. Bob Menendez (D-N.J.), the ranking member of the Senate Foreign Relations Committee, said on June 28 he could not support the sale of precision-guided munition kits to Saudi Arabia and the UAE, of which Congress officially has not been notified.

Menendez said he is “not confident” that the weapons sales will help drive the parties toward a political settlement. “Even worse, I am concerned that our policies are enabling perpetuation of a conflict that has resulted in the world’s worst humanitarian crisis,” he wrote in a letter to Secretary of State Mike Pompeo and Defense Secretary Jim Mattis.

Sen. Edward Markey (D-Mass.), a member of the Senate Foreign Relations Committee, announced on Aug. 1 that he would place a hold on the nomination of R. Clarke Cooper to be assistant secretary of state for political-military affairs unless the administration changes its policy on 3D gun printing. Cooper would be in charge of the department’s Directorate for Defense Trade Controls (DDTC), the office that published the short-lived exemption for Defense Distributed.

Tina Kaidanow, the acting assistant secretary of state for political-military affairs, broadly defended the administration’s approach at a public event Aug. 8. In describing the implementation plan for the Trump administration’s conventional arms transfer policy, she focused on the economic benefits of a more aggressive governmental push to sell arms.

Although Kaidanow mentioned that human rights and nonproliferation objectives remain a part of U.S. conventional arms transfer policy, the plan’s three main elements are directed at increasing arms exports. Those elements include proactively ensuring that “U.S. products can win in the competitive global market place,” organizing governmental action to support that, and producing “conducive environments…to foster the efficient operations of U.S. defense trade.”

“What this initiative makes clear,” she said, “is that, under this administration, there will be no more active advocate for U.S. sales than the U.S. government itself.”