Leaders of the 29 NATO member nations approved changes to the alliance’s policies on nuclear deterrence and nonproliferation during their July 11–12 summit in Brussels. 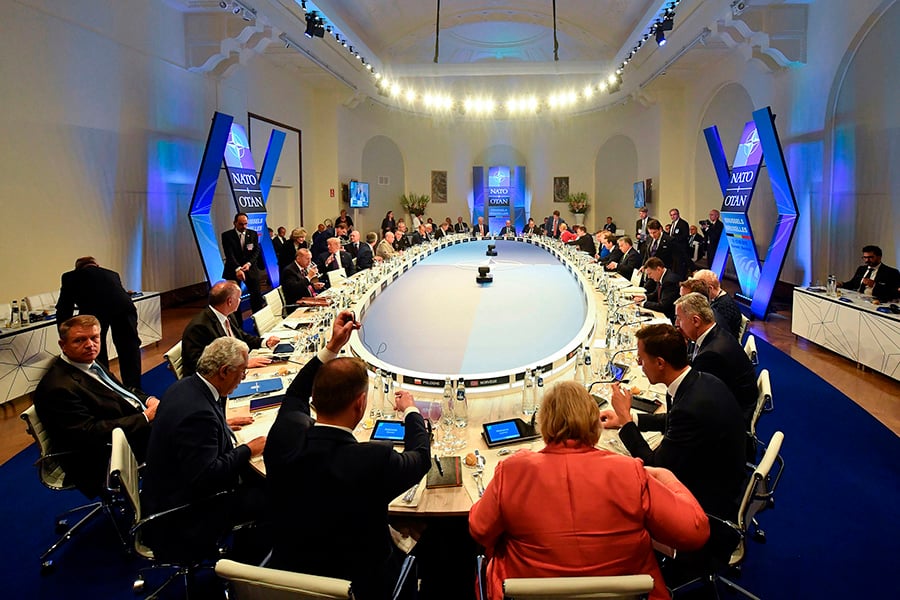 This phrasing suggests that NATO credits an increased role to the 150 to 200 B61 nuclear gravity bombs believed to be deployed on the territory of five NATO states (Belgium, Germany, Italy, the Netherlands, and Turkey). The move comes after the Trump administration’s 2018 Nuclear Posture Review report published in February, which asserted that the B61 warheads contribute to the “supreme guarantee of Alliance security.” (See ACT, March 2018.)

The 2018 declaration also addressed in stronger terms alleged Russian violations of the 1987 Intermediate-Range Nuclear Forces (INF) Treaty. The 2016 declaration highlighted the importance of the INF Treaty and called on Russia “to preserve the viability of the INF Treaty through ensuring full and verifiable compliance,” but the new declaration devoted greater attention to the issue. NATO leaders stated that “the most plausible assessment would be that Russia is in violation” of the treaty, as Washington has asserted for several years, and supported a renewed dialogue between the United States, Russia, and NATO allies to bring the treaty back into full force.

Further, the 2018 declaration deviated from previous summit documents on a number of international nonproliferation agreements and treaties, including the Comprehensive Test Ban Treaty (CTBT), the Iran nuclear deal, and the 2010 New Strategic Arms Reduction Treaty (New START). Although the 2016 declaration called for the universalization of the CTBT, the 2018 declaration called on all states “to declare and to maintain a voluntary moratorium [on nuclear testing]…pending the potential entry into force” of the CTBT.

The 2016 summit statement commended the Iran deal, but the 2018 document did not mention it. This reflects European efforts to preserve the agreement after U.S. President Donald Trump’s May 8 decision to have the United States withdraw from the accord, which he labeled “a horrible, one-sided deal.” (See ACT, June 2018.)

The 2018 declaration also praised U.S. and Russian reductions in strategic nuclear weapons under New START and expressed “strong support for its continued implementation,” while stopping short of calling for an extension of the treaty beyond its 2021 expiration date. New START had not been mentioned since the 2010 summit document.

The declaration follows the trend of recent NATO summits to highlight the importance of nuclear weapons in NATO strategy amid worsening tensions between Russia and the West.

In addition to changes on the nuclear policy front, the summit also took steps to buttress NATO’s conventional deterrence posture. These included the establishment of an Atlantic Command post, an invitation to Macedonia to join the alliance, and approval of the “Four 30s” initiative to provide in a NATO-Russia crisis 30 troop battalions, 30 squadrons of aircraft, and 30 warships within 30 days to bolster combat readiness.

Prior to the summit, many feared an explosive performance due to Trump’s worsening relationship with allies in recent months. Trump particularly has criticized NATO’s European members and Canada for failing to share the NATO financial burden, despite increases in their defense spending for the fourth year in a row. (See ACT, July/August 2018.)

The alliance meeting ended with leaders disputing Trump’s public assertion that he had won additional defense-spending commitments from them. Still, Jamie Shea, a NATO deputy assistant secretary-general, called the summit declaration “the most substantive…the most complete, [and] the most consensual” NATO agreement in years.