Lawmakers voted in July to require the Defense Department to begin developing a space-based ballistic missile defense interceptor layer regardless of whether a forthcoming review of missile defense policy recommends such an action and despite long-standing concerns about the financial costs and strategic risks of space-based defenses. 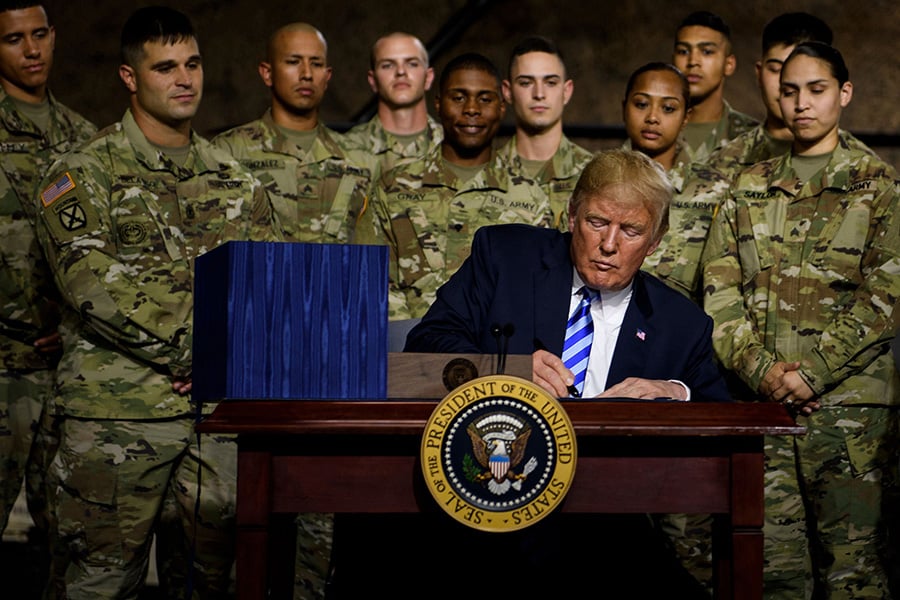 The United States has conducted research and development on space-based interception concepts, most notably under the auspices of President Ronald Reagan’s Strategic Defense Initiative, but has never deployed an interceptor layer in space.

It remains to be seen whether the long-delayed missile defense review, which is intended to guide policy, will endorse proceeding with development of a space-based interceptor layer. (See ACT, May 2017.) The reasons for the delay in the completion of the review, originally expected to be released in February, are unclear.

The final version of the bill was passed July 26 by the House and Aug. 1 by the Senate. President Donald Trump signed the bill into law on Aug. 13.

According to the law, the space-based system should be regionally focused and capable of intercepting missiles during their boost phase and achieve an operational capability at the earliest possible date. The law requires the Pentagon to draw up a 10-year plan outlining different phases of development, including refined requirements; cost, schedule, and performance estimates; and a testing schedule.

The prior year’s authorization law also mandated the development of interceptors in space but only “[i]f consistent with the direction or recommendations of the Ballistic Missile Defense Review that commenced in 2017.” (See ACT, December 2017.) The 2019 law amends that provision by eliminating the link to the review and instead conditioning development on “the availability of appropriations.”

The authorization law and the Senate and House versions of the fiscal year 2019 defense appropriations bill do not include funding provisions for space-based defenses.

The new authorization language is a modified version of an amendment offered by Sen. Ted Cruz (R-Tex.) during the Senate Armed Services Committee’s consideration of the authorization bill in late May. The committee adopted Cruz’s amendment by a vote of 16–11. The House version of the bill did not include language on space defenses.

The White House expressed its opposition to the Cruz provision in a June policy statement on the Senate bill. The Defense Department “is examining multiple ways to enhance our missile defense capabilities; directing the development of a space-based layer is premature at this point and creates a large unfunded mandate,” the statement said.

Lt. Gen. Samuel Greaves, the director of the Missile Defense Agency (MDA), said at a symposium in Huntsville, Alabama, on Aug. 8 that the agency is “developing options to pursue” a space-based missile defense “capability if the nation decides that is what we should be doing.”

“Congress has already written some language that would push us, direct us, guide us in that area,” he added, in reference to the language in the fiscal year 2017 and 2018 authorization measures.

Supporters of such a layer claim that it would enhance U.S. security by allowing the interception of adversary ballistic missiles during their boost phase, when a missile is traveling its slowest and unable to deploy countermeasures.

Michael Griffin, undersecretary of defense for research and engineering, told reporters at the Alabama symposium that putting interceptors in space is “a relatively easy technological challenge” and has been “a victim of unrealistically high, uninformed cost estimates.”

But critics argue that space-based interceptors are an unaffordable, ineffective, and counterproductive form of defense.

A 2011 report from the Institute for Defense Analysis showed costs ranging from $26 billion for a limited mission to $60 billion for a “medium” capability system that could perform against near-term threats to more than $200 billion for a global system.

In addition to requiring development of space defenses, the authorization law mandates the development of an air-launched and/or ship-based boost-phase missile defense capability; a plan to accelerate by at least one year the deployment of 20 additional ground-based interceptors with redesigned kill vehicles at Fort Greely, Alaska; and a report on the projected costs over a period of 10 years to implement any recommendations of the missile defense review.

The law authorizes $9.7 billion for the MDA, a decrease of roughly $200 million from the administration’s initial request.

Overall, the law authorizes $716 billion for national defense programs, which matches the revised 2011 Budget Control Act spending cap for fiscal year 2019 agreed by Congress earlier this year. (See ACT, May 2018.) The last time Congress passed the authorization bill before the Oct. 1 start of the new fiscal year was in September 1996, when Congress approved the fiscal year 1997 authorization legislation.

The authorization law supports and, in some cases, increases funding above the Trump administration’s proposed budget request for programs to sustain and rebuild nuclear-armed missiles, submarines, and bombers and their associated nuclear warheads and supporting infrastructure.

The law calls for a plan to accelerate the development of new fleets of air-launched cruise missiles (ALCMs) and intercontinental ballistic missiles (ICBMs). (See ACT, October 2017.) The law also authorizes an additional $85 million above the budget request of $615 million for the long-range standoff weapon program to replace the existing ALCM, and $69 million above the request of $345 million for the program to replace the Minuteman III ICBM with a missile system called the Ground-Based Strategic Deterrent.

In addition, the law provides the needed approval and requested funding authorization for the development of low-yield nuclear warheads on submarine-launched ballistic missiles as proposed by the Trump administration’s Nuclear Posture Review report in February.

On arms control, the authorization law requires Trump to submit a report on whether he has raised with Russia the issue of limiting under the terms of the 2010 New Strategic Arms Reduction Treaty (New START) Moscow’s development of several new strategic nuclear weapons systems and, if so, whether Russia has agreed to limit the systems.

New START provides for discussions on emerging strategic offensive arms and possible limitation of them.

The authorization law includes a provision expressing the sense of Congress that, in light of Russia’s material breach of the 1987 Intermediate-Range Nuclear Forces (INF) Treaty, “the United States is legally entitled to suspend the operation of the INF Treaty in whole or in part for so long as the Russian Federation continues to be in material breach” of the treaty. The provision requires the president to certify that he is implementing requirements in prior laws to impose economic sanctions on Russia for its violation of the treaty.

The authorization law waters down language in the original House version that would have blocked the Air Force’s budget request to replace the aircraft that the United States uses to conduct Open Skies Treaty flights, including over Russia. (See ACT, July/August 2018.) Instead, the law conditions funding necessary to acquire an upgraded digital imaging system for treaty flights and implement certain decisions of the treaty’s implementing body.