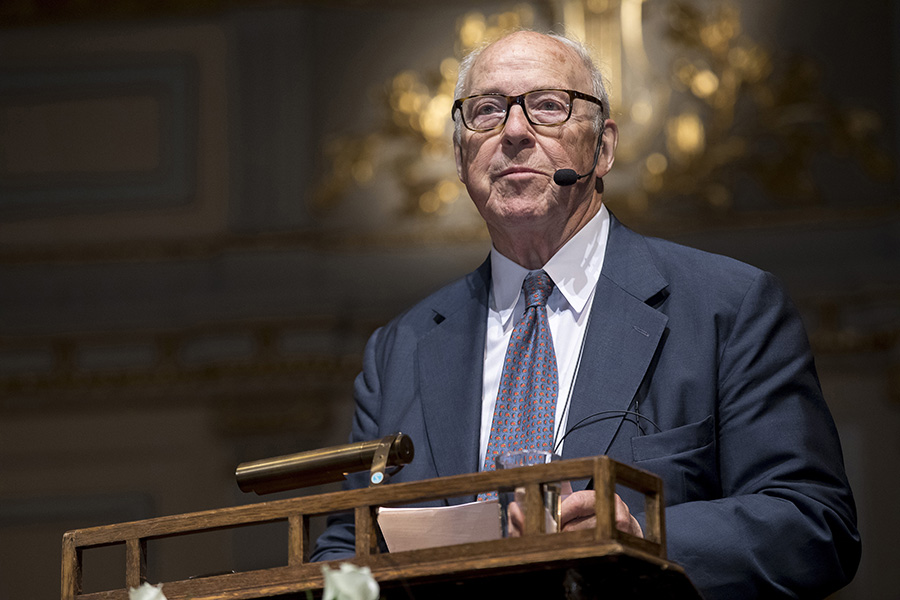 Yet, much of the world is currently engaged in arms races. Even heaven is not left in peace. Outer space is already “a war-fighting domain” filled with satellites, and many can be mobilized for war. Low-level cyberwar is already here. Nuclear weapons, “Star Wars,” and missile shields are again in focus.

In 2009, President Barack Obama and Russian President Dmitry Medvedev declared in London that they would work for a total elimination of nuclear weapons. Today, there is no trace of such negotiations. Rather, several states, notably the United States and Russia, keep reminding the world of their arsenals.

At the 2020 review conference of the nuclear Nonproliferation Treaty, nuclear-weapon states-parties will no doubt argue that a step-by-step approach is the only practical way to disarmament. Non-nuclear-weapon states will remind us that step-by-step action has been urged for 50 years with meager results. Now it is practiced—backward. The stocks of nuclear weapons still suffice to end human civilization in a quick suicide, while we have added the risk of a slow suicide through global warming.

Some claim that nuclear weapons have helped to prevent armed confrontations. They point to the Cuban missile crisis in 1962, when the fear of a nuclear exchange made the United States and the Soviet Union shy away from war and agree to a diplomatic solution. Others remind us that, on a number of occasions, misunderstandings and mistakes nearly caused nuclear exchanges and that only luck saved the world.

Last year, frustration among non-nuclear-weapon states and civil society led to the negotiation of a treaty comprehensively prohibiting possession and use of nuclear weapons. As none of the states possessing nuclear weapons will adhere to the treaty, it will not lead to nuclear disarmament. Indeed, some of them are so opposed to the treaty that they seek actively to dissuade other states from joining.

The main political aim of the treaty, perhaps, is not the unrealistic one to achieve nuclear disarmament, but rather to further delegitimize nuclear weapons and thereby add restraints to their use and strengthen a nascent general norm against use.

What restraints? The first restraint undoubtedly flows from the fear that an attack with nuclear weapons may lead to a retaliatory nuclear strike and mutually assured destruction or unacceptable devastation. This restraint and the stigma attached to any nuclear weapons use no doubt continues to weigh heavily on military planners. From time to time, military officials are heard to voice doubts that they can seriously plan for the use of nuclear weapons.

Perhaps recent proposals to introduce new types of smaller nuclear weapons are advanced in view of a perceived reduced credibility of the old nuclear weapons. Yet, low-yield, “more useable” nuclear weapons would not be fit for the possibly legal use citing the “extreme circumstance of self-defense” to which the International Court of Justice has referred. They would be battlefield weapons with a lower threshold for use. They deserve to be opposed and discredited. From this viewpoint, the 2017 Treaty on the Prohibition of Nuclear Weapons was timely and welcome.

It is rightly said that so long as nuclear weapons exist, they may come to be used. It is paradoxical that this risk may also act as a constant warning to nuclear-weapon states not to let themselves be drawn into controversies that might escalate to a nuclear conflict. In 1985, U.S. President Ronald Reagan and Soviet leader Mikhail Gorbachev showed that they were fully aware of this and voiced a line that must never be forgotten: “A nuclear war cannot be won and must not be fought.”

Hans Blix was director-general of the International Atomic Energy Agency from 1981 to 1997. This column is adapted from his May 28 lecture, “Is the World on the Road to Peace or War?,” to the Stockholm International Peace Research Institute in Stockholm.