“Your association has taken a significant role in fostering public awareness of nuclear disarmament and has led to its advancement.”
– Kazi Matsui
Mayor of Hiroshima
June 2, 2022
U.S. Signals Shift at UN First Committee

When it came to voting at the UN General Assembly First Committee, the Trump administration may have said something by saying nothing. 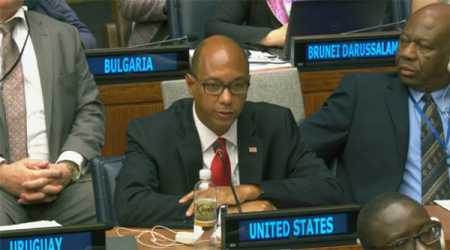 The U.S. delegation to the First Committee session, which drew extra attention due to the shift in U.S. leadership, abstained from two resolutions that the United States had backed last year, one supporting the Comprehensive Test Ban Treaty (CTBT) and the other welcoming the Arms Trade Treaty (ATT).

On others, the delegation followed many of the positions taken by the Obama administration. The United States co-sponsored a resolution tying together disarmament and international security introduced by Japan, which it had voted for in the past, and continued to express opposition to the Treaty on the Prohibition of Nuclear Weapons.

The United States supported all other treaty resolutions it had voted for in past years, including one calling for a ban on fissile material production and one in support of the Chemical Weapons Convention. It continued to abstain from two other resolutions relating to treaties to which the United States is not party: the Convention on Cluster Munitions and the Mine Ban Treaty.

This year, the United States spoke in support of funding the Biological Weapons Convention, after the resolution related to this treaty was adopted without a vote.

The United States chose to co-sponsor a controversial resolution introduced by Japan because, more than any other, it highlighted “the inseparable link between progress on disarmament and the international security environment,” Wood said in the email.

This resolution was considerably revised from the 2016 version to condition its call for prompt disarmament. The 2017 resolution eliminated several references to the elimination of nuclear arsenals and also scrapped a call to comply with steps toward disarmament agreed at previous nuclear Nonproliferation Treaty (NPT) review conferences. Instead, it added several calls on all states to “ease international tension, strengthen trust between states and create the conditions that would allow for” further steps to disarmament.

The new resolution also weakened its support for achieving the entry into force of the CTBT and negotiating a fissile material cutoff treaty (FMCT). It replaced a previous call for all Annex 2 states to adopt the CTBT with a demand for North Korea first to sign and ratify the treaty, claiming that the treaty cannot enter into force until North Korea ceases its nuclear testing. Instead of urging all states to negotiate an FMCT, as the 2016 resolution did, the 2017 resolution merely acknowledged the “widespread call” for such negotiations.

In a statement after the vote, Dell Higgie, New Zealand’s ambassador for disarmament, expressed “disappointment” with the new text, adding that it “risks fracturing the widespread and long-standing agreement on certain fundamental aspects of the international community’s approach to nuclear disarmament.”

The United States and other nuclear-armed states vocally objected to all explicit or implicit references to the nuclear weapons prohibition treaty in almost a dozen First Committee resolutions. France, the United Kingdom, and the United States called the treaty “dangerous,” Russia described it as a “mistake,” and Pakistan said it was not inclusive.

The United States opposed references to the prohibition treaty because it is “counterproductive, divisive, and only serves to divert attention from actual effective measures,” Wood said in the email, adding the treaty “will not result in the elimination of a single nuclear warhead or improve the security of any state.” Thomas Hajnoczi, Austrian ambassador to the UN Office in Geneva and leading negotiator of the treaty, argued in a Nov. 8 email to Arms Control Today that the division at the First Committee was caused instead by nuclear-weapon states failing to comply with NPT obligations and that efforts to weaken further such commitments would “seriously harm the NPT Review Process.”

Hajnoczi said France, the UK, and the United States objected to mentioning the prohibition treaty for another reason: to prevent it from becoming customary international law. “They perceive as the best way of not being bound by the prohibition norm in the future [is] to persistently object to it whenever it is mentioned,” he said.