Although that constraint leaves the United States out of range, most of the Middle East, including regional U.S. military facilities and Israel, are within the 2,000-kilometer range. Further, there was no indication that Khamenei’s order, citied by Iranian officials, precludes Iran from continuing to develop satellite launch rockets, a capability that would inform any attempt to produce intercontinental ballistic missiles. 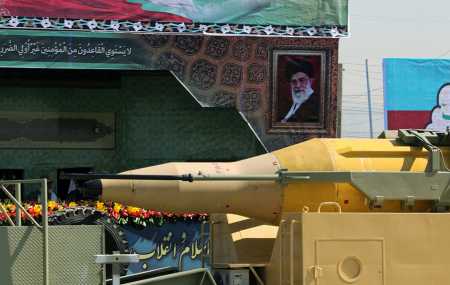 Iranian government officials have said repeatedly that Iran would abide by such a limit voluntarily and focus on improving accuracy. A statement by the supreme leader in this regard carries greater political significance. Iran’s recent ballistic missile tests appear to confirm that Tehran is concentrating on accuracy rather than trying to extend the range of its systems.

Iran’s ballistic missiles are not covered by the 2015 multilateral nuclear deal known as the Joint Comprehensive Plan of Action. UN Security Council Resolution 2231, which endorsed the deal, called on Iran to refrain from ballistic missile testing on systems “designed to be capable” of delivering nuclear weapons.

U.S. President Donald Trump has criticized the nuclear deal for failing to include ballistic missiles and, in an Iran policy speech on Oct. 13, directed his administration to work with Congress to “fix” what he described as “flaws” in the agreement, including the issue of ballistic missiles. (See ACT, November 2017.)

Washington’s EU partners in the nuclear agreement—France, Germany, and the United Kingdom—said in a statement responding to Trump’s speech that they are willing to work on ballistic missile restrictions outside of the deal.

Although Resolution 2231 only “called” on Iran to refrain from ballistic missile activities, including development and testing, there is a clear prohibition on transfers or exports of ballistic missiles and related technologies without advance approval from the UN Security Council. A similar process is required for a range of armaments.

Yet, a U.S. statement tying a missile fired on Riyadh, Saudi Arabia, to Iran raises concerns that Iran may have violated the restriction prohibiting transfers. The Saudi military intercepted a missile from Yemen targeted at Riyadh’s international airport on Nov. 4.

Air Force Lt. Gen. Jeffrey Harrigan, head of U.S. Air Force Central Command in Qatar, said on Nov. 10 that there have been Iranian markings on missiles used by the Houthis against Saudi and Saudi-backed forces in the war in Yemen. He said the markings “connect the dots to Iran.” Other countries, including Saudi Arabia and France, also linked the missile to Iran in earlier statements.

Maj. Gen. Mohammad Ali Jafari, head of the Islamic Revolutionary Guard Corps, said in Iran on Nov. 5 that accusations that the missile came from Iran are “baseless” and contended that Yemen can produce its own ballistic missiles.

Iran allegedly has transferred missile components in violation of Resolution 2231, according to a June report from the UN secretary-general assessing implementation of the resolution. The report referenced two cases in which missile components were seized in Ukraine. Additionally, the report noted letters from authorities in Yemen and the United Arab Emirates alleging that arms of Iranian origin were seized in Yemen.