Lawmakers voted in November to require the Defense Department to establish a program to begin development of a new missile system that if tested would violate the 1987 Intermediate-Range Nuclear Forces (INF) Treaty. 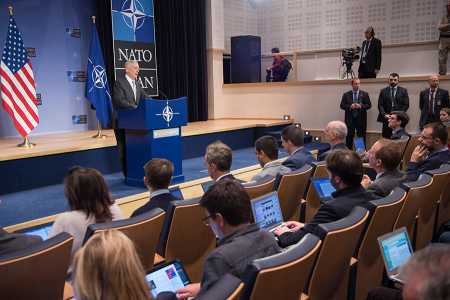 The bill authorizes $58 million for a conventional, road-mobile, ground-launched cruise missile (GLCM) with a range prohibited by the treaty, as well as other offensive and defensive capabilities to counter Russia’s alleged deployment of a GLCM in violation of the treaty. The measure also expresses the sense of Congress that the United States is entitled to suspend its implementation of the treaty so long as Russia remains in material breach. Furthermore, it requires a report outlining possible sanctions against individuals in Russia deemed complicit in the violation.

The policy provisions are part of the fiscal year 2018 National Defense Authorization Act and come amid reports that the Pentagon has already begun preliminary research on the new missile.

The final compromise version of the bill, passed Nov. 14 by the House and Nov. 16 by the Senate, establishes spending ceilings and legal guidelines for Pentagon programs and activities conducted by the Energy Department’s semi-autonomous National Nuclear Security Administration (NNSA).

Since 2014, Washington has accused Moscow of violating its commitment “not to possess, produce, or flight-test” a GLCM having a range prohibited under the INF Treaty. In the past year, the Pentagon has alleged that Russia is fielding a noncompliant system. Moscow has denied both charges.

The INF Treaty required Russia and the United States to eliminate permanently their nuclear and conventional ground-launched ballistic and cruise missiles with ranges of 500 to 5,500 kilometers. The treaty does not prohibit activities related to research and development of this category of weapons.

The original House and Senate versions of the authorization bill called for R&D programs on a new GLCM. (See ACT, October 2017.) The House bill required development of a conventionally armed missile, whereas the Senate bill would authorize a nuclear-capable version. 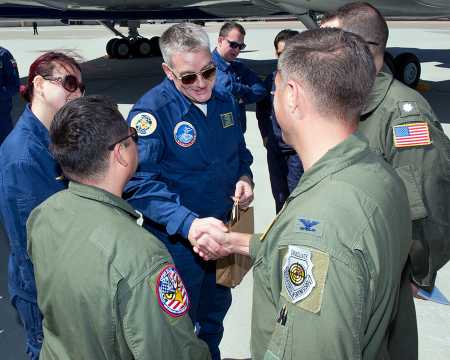 In statements during the summer, the Trump administration objected to the GLCM language, stating that it “unhelpfully ties the administration to a specific missile system, which would limit potential military response options.” Nevertheless, The Wall Street Journal reported on Nov. 16, citing U.S. officials, that the Pentagon started research on the missile given the likelihood that it would soon be required by law.

Defense Secretary Jim Mattis briefed NATO defense ministers on the administration’s plans at a Nov. 9 meeting in Brussels. Mattis told reporters afterward that Washington is focused on trying to bring Russia back into compliance and does not intend to abandon the pact.

A U.S. official told The Wall Street Journal that the idea behind beginning the GLCM research is “to send a message to the Russians that they will pay a military price” for violation of this treaty. “We are posturing ourselves to live in a post-INF [Treaty] world…if that is the world the Russians want,” the official added.

If the United States ever decides to deploy the new missiles, development would likely take years and cost several billion dollars.

Meanwhile, The Washington Post reported on Nov. 16 that the Trump administration has called for another meeting of the Special Verification Commission, the treaty’s dispute resolution forum. The commission last met a year ago without progress. (See ACT, December 2016.)

The authorization bill would provide $626 billion for national defense programs and $66 billion for the overseas contingency operations account, which is nominally used to fund the wars in Afghanistan and Syria but also funds other defense programs. This spending level exceeds the spending cap for fiscal year 2018, imposed by the 2011 Budget Control Act, by roughly $77 billion and the administration’s budget request by $23 billion. The bill does not include an additional $8 billion for defense activities requested by the administration.

The government is currently being funded by a continuing resolution that covers most programs at the fiscal year 2017 appropriated level through early December. Republican and Democratic lawmakers have yet to agree on top-line spending levels for the current fiscal year.

The bill authorizes $10.5 billion for the Missile Defense Agency, an increase of $2.6 billion above the administration’s initial request. In total, the bill adds $4.4 billion above the request for missile defense and related programs.

The legislation provides all of the extra $4 billion for missile defense programs requested by the administration in a Nov. 6 amendment to its fiscal year 2018 budget request (see page 40). The supplemental request follows congressional approval in October for the transfer of $440 million in unspent fiscal year 2017 Army operations and maintenance funds to missile defense programs. (See ACT, November 2017.)

The Ground-Based Midcourse Defense (GMD) system, designed to protect the United States against a limited intercontinental ballistic missile attack from North Korea or Iran, would receive $1.3 billion in the bill, an increase of $498 million above the requested level of $828 million. This includes $88 million to begin increasing the number of ground-based, long-range missile defense interceptors by up to 20 beyond the currently deployed 44.

The administration is currently conducting a congressionally mandated review of the U.S. approach toward missile defense. (See ACT, May 2017.) The review is slated for completion by the end of the year.

The authorization bill limits funding for the Comprehensive Test Ban Treaty Organization (CTBTO) and declares that UN Security Council Resolution 2310, passed in September 2016, does not “obligate…nor does it impose an obligation on the United States to refrain from actions that would run counter to the object and purpose” of the 1996 Comprehensive Test Ban Treaty (CTBT).

The explanatory statement accompanying the bill states that “it is wholly inappropriate for U.S. funds to support activities of the [CTBTO] that include advocating for ratification of the treaty or otherwise preparing for the treaty’s possible entry into force.”

The CTBTO is the intergovernmental organization that promotes the CTBT, which has yet to enter into force, and maintains the global International Monitoring System to deter and detect nuclear test explosions. Resolution 2310 urges eight countries, whose ratification is needed for the treaty to enter into force, to ratify the CTBT “without further delay” and calls on all states to refrain from conducting nuclear tests, emphasizing that current testing moratoria contribute to “international peace and stability.” (See ACT, October 2016.)

The legislation also imposes conditions on funding to upgrade U.S. digital imaging systems pursuant to implementation of the 1992 Open Skies Treaty. The treaty, which entered into force in 2002, permits each of the agreement’s 34 states-parties to conduct short-notice, unarmed reconnaissance flights over the others’ entire territories to collect data on military forces and activities.

The United States has yet to transition to the use of the more advanced digital sensors in its treaty flights over Russia, but is requesting funding to do so in the near future.

The United States has raised numerous concerns about Russian compliance with the treaty. Republican lawmakers have voiced concern that Russian flights under the treaty, which now employ more advanced sensors and cameras as allowed by the treaty, amount to spy missions.