The Congressional Budget Office (CBO) in a new report highlights the rising cost of current plans to sustain and upgrade U.S. nuclear forces, warns about the many challenges facing these plans, and outlines several options to manage the arsenal that could save scores of billions of dollars.

The report, the most authoritative cost assessment to date, comes as the Trump administration’s ongoing Nuclear Posture Review (NPR), due to be completed by the end of the year, appears poised to call for new types of nuclear weapons and for increasing their role in U.S. defense policy. The report is also likely to fuel an ongoing debate in Congress about how much the United States can afford to spend on nuclear weapons. 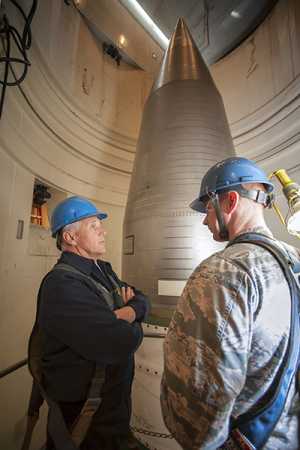 The CBO estimates that the nuclear weapons spending plans President Donald Trump inherited from his predecessor will cost taxpayers $1.2 trillion in inflation-adjusted dollars between fiscal years 2017 and 2046. This amounts to about 6 percent of all spending on national defense anticipated for that period, as of President Barack Obama’s final budget request to Congress in February 2016. When the effects of inflation are included, the 30-year cost would approach $1.7 trillion, according to a projection by the Arms Control Association.

These figures are significantly higher than previously reported estimates of roughly $1 trillion.

The CBO estimate captures spending on the triad of nuclear delivery systems and command and control systems at the Defense Department and on nuclear warheads and their supporting infrastructure at the Energy Department’s semi-autonomous National Nuclear Security Administration (NNSA). Nearly every element of the U.S. nuclear arsenal is slated to be upgraded over the next 20 years. Most of these efforts are in the early stages, and a few others have yet to begin.

It remains to be seen whether the NPR will recommend changes to the current arsenal and upgrade plans. (See ACT, July/August 2017.) Trump has said that he favors unspecified actions to “strengthen and expand” U.S. nuclear capabilities, which could lead to a greater increase in spending than projected by the CBO.

The Guardian newspaper reported on Oct. 29 that the administration is considering several options to bolster the arsenal, including a plan for lower-yield warheads for U.S. ballistic missiles, a re-nuclearization of the Tomahawk sea-launched cruise missile, and a reduction in the amount of time it would take to resume nuclear explosive testing.

If the NPR fails to alter the current spending trajectory or accelerates or expands on it, spending on nuclear weapons could threaten money needed for other national security programs, including non-nuclear military spending, which Trump has pledged to increase.

“At a time when modernization of other conventional systems is planned and defense spending is likely to be constrained by long-term fiscal pressures, nuclear modernization will compete for funding with other defense priorities,” the CBO report states.

In addition to budgetary challenges, the report notes that the modernization program will face policy, diplomatic, programmatic, and management challenges.

The October report, titled “Approaches for Managing the Cost of U.S. Nuclear Forces, 2017 to 2046,” is the latest in a series of CBO reports on the cost of U.S. nuclear forces. (See ACT, March 2017.) The CBO prepared the 30-year study in response to a request from Sen. Robert Menendez (D-N.J.), a former chairman of the Senate Foreign Relations Committee.

Congress has largely backed the effort to rebuild the arsenal. In an op-ed published on Nov. 8 in Defense News, Sens. Deb Fischer (R-Neb.) and Joe Donnelly (D-Ind.), the chair and ranking member of the Senate Armed Services strategic forces subcommittee, described the planned increase in nuclear weapons spending as “modest” and “temporary.” They added that it “is needed following decades of underinvestment in the nuclear mission.”

But a vocal group of mostly Democratic lawmakers continue to question the need and affordability. “Congress still doesn’t seem to have any answers as to how we will pay for this effort, or what the trade-offs with other national security efforts will be if we maintain an arsenal of over 4,000 nuclear weapons and expand our capacity to produce more,” Rep. Adam Smith (D-Wash.), ranking member on the House Armed Services Committee, said in an Oct. 31 statement on the CBO report.

Similarly, a group of 14 Democratic senators on Nov. 29 sent a letter to Defense Secretary Jim Mattis, Secretary of State Rex Tillerson, and Energy Secretary Rick Perry arguing that the CBO report “makes clear, at a minimum, that the existing plan is unaffordable and needs revision.”

Breaking Down the Cost

Of the $1.2 trillion that the CBO projects will be spent on nuclear forces, $399 billion would be allocated for acquiring new missiles, bombers, and submarines and conducting nuclear warhead life-extension programs. The remaining $843 billion would fund sustainment of the current generation of forces and new forces once they entered service.

The projection includes the full cost of the long-range bomber leg of the triad, which has nuclear and non-nuclear missions, and an estimate of additional costs based on historical cost growth.

Annual costs are slated to peak at about $50 billion during the late 2020s and early 2030s. During this period, nuclear weapons would consume about 8 percent of total national defense spending and 15 percent of the Defense Department’s acquisition costs.

The CBO report evaluates nine alternatives to the current sustainment and upgrade program that, if pursued, would reduce nuclear weapons spending. The report also measures the capability of the alternatives relative to that of the current program across four metrics: the number of warheads, crisis management, limited nuclear strikes, and large-scale nuclear exchanges. 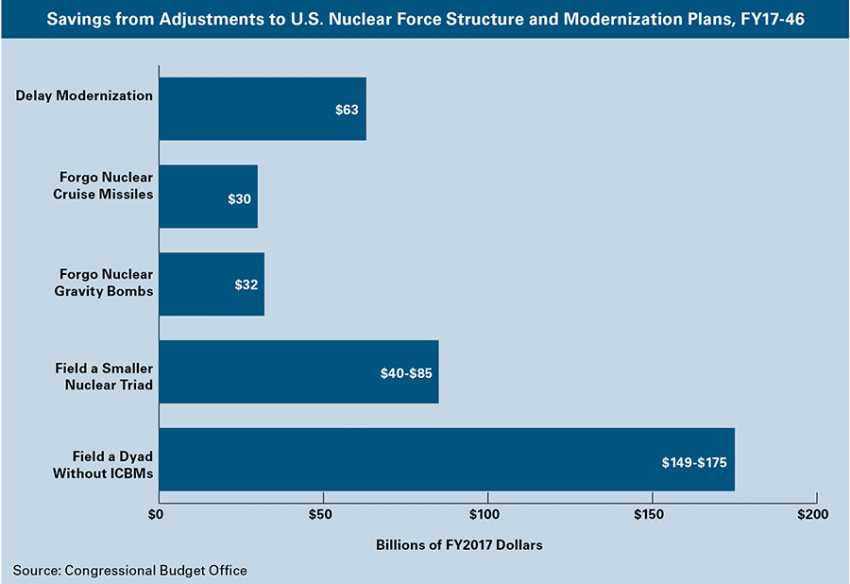 As part of an option that would delay modernization, the CBO evaluated the cost savings from delaying the existing plan to build a new fleet of intercontinental ballistic missiles (ICBMs) and instead refurbishing the existing Minuteman III ICBM. The CBO projects this approach would save $37 billion over the next 20 years, when modernization costs are slated to be at their highest, and $17.5 billion over the next 30 years.

The Air Force argues that a new ICBM is necessary because the Minuteman III is aging into obsolescence and losing its capability to penetrate adversary missile defenses. (See ACT, March 2017.)

Another option would forgo the current plan to buy a new fleet of nuclear air-launched cruise missiles (ALCMs). The CBO projects that this would produce a 30-year savings of roughly $30 billion. According to the report, eliminating ALCMs would not impact the number of deployed, on alert, or survivable warheads, but would “would diminish the capability of U.S. nuclear forces, particularly for limited nuclear strikes.”

The CBO also examined options that would reduce the U.S. nuclear arsenal from a triad of delivery systems to a dyad. For example, eliminating the ICBM leg would save between $120 billion and $149 billion over 30 years. The CBO notes that such a step would reduce the capability of U.S. nuclear forces in the event of a large-scale nuclear exchange with Russia.