Beatrice Fihn, executive director of the International Campaign Against Nuclear Weapons (ICAN), has had an extraordinary year.

At the United Nations, ICAN’s 10-year campaign culminated in the adoption on July 7 of the Treaty on the Prohibition of Nuclear Weapons, the first legally binding accord to prohibit such weapons with a goal of their eventual elimination. Then, on October 6, the Norwegian Nobel Committee awarded the 2017 Nobel Peace Prize to ICAN “for its work to draw attention to the catastrophic humanitarian consequences of any use of nuclear weapons and for its ground-breaking efforts to achieve a treaty-based prohibition of such weapons.” 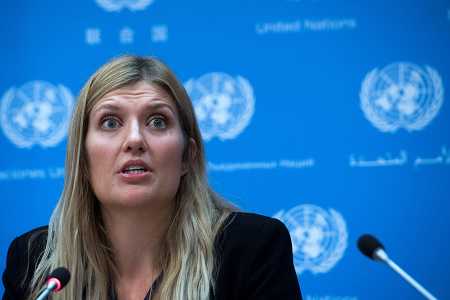 Fihn has led ICAN since 2014. Previously, she headed the disarmament program at the Women’s International League of Peace and Freedom, where she started as an intern. She studied international relations at Stockholm University and law at the University of London.

ICAN, founded in 2007 to ban nuclear weapons, is a coalition of 468 nongovernmental organizations in 101 countries. In making the award, the Nobel committee said its members are fully aware that an international legal prohibition “will not in itself eliminate a single nuclear weapon, and that so far neither the states that already have nuclear weapons nor their closest allies support the nuclear weapon ban treaty.”

Still, the committee said this year’s peace prize is “a call upon these states to initiate serious negotiations with a view to the gradual, balanced and carefully monitored elimination of the almost 15,000 nuclear weapons in the world.” Fihn said she expects ICAN will continue to take a leadership role in working to achieve the treaty’s early entry into force and its eventual success. This transcript has been edited for length and clarity.

Congratulations to ICAN for winning the Nobel Peace Prize. What was your first reaction to the news?

Just really overwhelmed. There’s a video of me that my colleague took in which I was walking around shaking my hands, hyperventilating. I just felt very strongly that this changes everything for us.

How has the award affected ICAN’s work? It’s been a few months.

It gave us what we have been missing so far in this campaign. That’s media coverage and a recognition outside the diplomatic community that there is a treaty that prohibits nuclear weapons, that there are people working on this issue, and that we’ve done something quite significant.

I think it’s catapulted us into the public awareness in a much bigger way than before, which is useful for many things—for us to be able to mobilize people, for putting pressure on governments, and for getting the opportunity to talk about nuclear weapons today in a way that isn’t centered around the North Korea threat only but that also questions nuclear weapons in general no matter who has them.

As you say, this was a pretty significant achievement. The prohibition treaty is one of the few breakthroughs in multilateral nuclear disarmament in many years. How do you see it affecting the global conversation around nuclear weapons in the years to come?

It’s too early to say. Obviously, the humanitarian angle, talking about what would happen if nuclear weapons were used, has stuck. Also, it has put a spotlight on all the states and organizations and people that are complicit in upholding the nuclear weapons structure in the world. We like to think that it’s just nine states, but we plan to expose how many more are participating in activities around nuclear weapons and legitimizing nuclear weapons. Long term, we really want to challenge the kind of behavior that goes against the treaty—use, testing of nuclear weapons, development, possession.

Humanitarian concerns are what have driven any kind of real progress on nuclear weapons, starting with the Partial Test Ban Treaty, when atmospheric testing had a huge impact on people. That perspective, what would happen to people if nuclear weapons were used, has always been the motivating factor.

However, a lot of governments have felt comfortable to do whatever they want in the name of state security. We see governments saying that they need to torture people or arrest them without rights for national security reasons. At some point, you have to draw a line on what atrocities governments can commit and claim [as] national security. It’s important to remember that indiscriminately slaughtering hundreds of thousands of civilians is not a national security interest. That’s what nuclear weapons will do if they’re used, and that’s what governments are threatening to do with the weapons that exist today.

The treaty elicited very strong criticism from nuclear-weapon states. Why is the treaty so controversial? Has any of the criticism given you any pause in your support for the treaty?

The treaty gets a lot of criticism because it challenges the belief that nuclear weapons are for some countries to have until they feel like not having them anymore and it removes control from the nuclear-armed states on how international law governs nuclear weapons. Nuclear weapons are mainly a political power tool, which means they’re also the most sensitive weapons to norms and opinions. They’re only powerful if people say that they are, so that’s why they’re also very fragile. 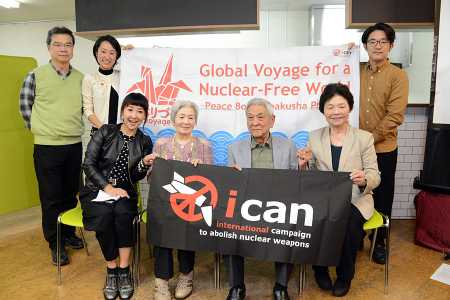 I think there can be criticism about certain parts of the treaty. For example, I also think that the treaty would be better if nuclear-armed states would sign on to it. I’d love to see that. Most criticism, though, is hiding the fact that the people who make the criticism don’t want nuclear weapons to be prohibited. This criticism comes from the most powerful countries in the world. They’re not easy opponents. There’s been pressure from states to back off. Nuclear-armed states held press conferences about how awful we are and how we’re doing the wrong thing. That has been, of course, tough. Not tough enough to stop us.

Another criticism, one that even the Nobel committee brought up in its statement, is that the treaty will not, in and of itself, eliminate a single weapon.

Well, that’s because the nuclear-armed states are not signing it! It’s in their power. If they wanted to, they could sign this treaty and eliminate their nuclear weapons, and then the treaty would lead to elimination. But I think that’s sort of an unjust benchmark to put this treaty against because the Comprehensive Test Ban Treaty doesn’t eliminate any nuclear weapons either. A fissile material cutoff treaty wouldn’t eliminate any nuclear weapons either. But somehow, we’re judged against the benchmark of securing international peace forever.

Turning to the negotiations themselves, there were a lot of women at the forefront of the prohibition treaty effort, including the negotiating conference president and several key heads of delegations. Did you think that the higher percentage of female leadership impacted the negotiations?

It’s difficult to tell. I don’t think that the sex of the negotiators really determines the outcome, but at the same time, I think the gender perspective is a huge influencer. [U.S. President] Donald Trump’s tweets about how diplomacy is useless indicate an extremely macho culture where negotiating and compromising is considered feminine and therefore weaker than bombing and starting wars. Negotiating to find joint solutions to global problems is something that, I think, is feminine coded. Women have been trained to focus more on that.

In many disarmament forums, women are underrepresented and don’t have as many leadership roles. Could the prohibition treaty negotiations, which had more women in leadership, be a model for future negotiations?

Yes, absolutely. If you do include people with different perspectives who are shaped by different norms, I think it definitely can help. The whole humanitarian consequences perspective isn’t about whether to bomb a city but on what happens afterward and who would build up the community again. It’s very often women who have to put everything together later.

I think having that perspective will make space for women much more than the military perspective. It gives a more complete picture of the problem. We’ve also seen in peace negotiations that if you include women, the negotiations go better because it involves the communities who maintain and build up the peace afterward. It’s definitely beneficial for all processes to involve different groups and to make sure to have as many perspectives as possible to get a solution that works for everyone.

Looking ahead, the treaty needs to be ratified by 50 states to enter into force. It currently has three. How does ICAN plan to get at least 47 others? Do you have a target date?

We looked at other weapons treaties, and to hit 50, it took those treaties approximately two years. I would love to see it get 50 ratifications before the end of 2018. I know that’s an ambitious goal. If it takes longer, it takes longer, but I think we should be able to move relatively fast into entry into force.

ICAN was founded to achieve a ban, which has now happened. What’s next for ICAN?

Now we need to work on the implementation. The treaty has always been the tool, not just the goal in itself. First, we need to build a strong norm, and that comes through getting as many countries to sign and ratify this treaty as possible. Also, parallel to that is to challenge behavior that lies outside this new norm.

We’ve been very, very focused on the negotiations. Now, we need to change direction and move toward focusing on the nuclear weapons and the nuclear-armed states. In a way, they’ve gotten away very easily because we’ve just focused on negotiations. But now, we have to look at their arsenals, their decisions, and their actions and campaign against that from the position of the treaty. So, we will find what kind of activities are going on today that are not in line with this treaty and then build campaign opportunities and mobilize people against those activities to stop them, whether or not the country has signed the treaty.