I was not in the government at the start of the Cuban missile crisis, but I was considered, rightly or wrongly, to be an expert on Soviet missiles. I was called to be part of a small team to analyze intelligence data that was coming in every day and prepare a report to go on President Kennedy’s desk first thing in the mornings to guide him in his decisions and actions.

So, I was right in the middle of it and knew exactly what was going on. I believed, then, that every day that I went in was going to be my last day on earth. That’s what I thought about the Cuban missile crisis at the time. Kennedy, after it was over, said he thought the probability of those events leading to a nuclear war was about one chance in three, one in three, which is pretty scary when the consequence at the other end of it is the end of civilization. 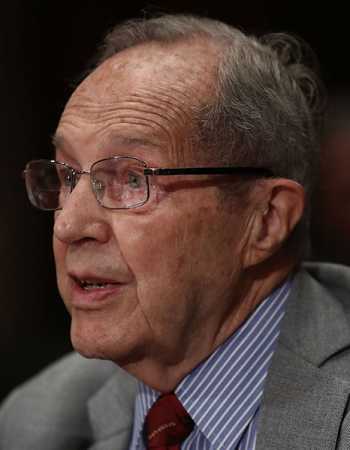 Kennedy’s statement was optimistic because he didn’t know, when he made that statement, some things that we now know. He didn’t know at that time that the Soviets already had tactical nuclear weapons in Cuba with authorization to the commanders to use them without reference to Moscow. If Kennedy had accepted the unanimous recommendation of his Joint Chiefs of Staff, which was to invade Cuba with conventional forces, our troops would have been decimated on the beachhead, and a general nuclear war would surely have followed. We can only wonder why Kennedy did not follow the combined recommendation of his Joint Chiefs of Staff.

Had he followed it, we would have surely had a nuclear war. He did not know that the Soviets had submarines escorting the ships that were carrying missiles to Cuba, that those submarines had nuclear torpedoes and that one of our destroyers, not knowing that either, was dropping depth charges at a submarine, and that the skipper of the submarine was preparing to launch a nuclear torpedo. That, in itself, would have brought about a nuclear war. The Soviets had a policy then that it took two out of three [commanders] on the submarine to decide to launch a nuclear torpedo, and the other two commanders had voted against it. It was that close—one person different would have changed that decision.

We were amazingly close to a civilization-ending nuclear war in Cuba, even closer than I realized at the time because I didn’t know some of those things. That’s a very scary situation.
But I want to emphasize one very important point. Neither Kennedy nor [Nikita] Khrushchev wanted a nuclear war. In spite of that, we almost blundered [into] one.

In the Cold War, we always thought that the danger was that the Soviet Union was going to conduct a surprise attack, as a bolt out of the blue; and all of our policies, all of our weapons programs, and so on were based on responding to that. But that was never the threat. The threat was always that we would blunder into a nuclear war, and that threat was almost realized in the Cuban missile crisis.

William Perry was U.S. secretary of defense from February 1994 to January 1997. Early in his career, he worked on classified government efforts to assess Soviet missiles. In October 1962, at the height of the Cuban missile crisis, he was part of a small group of analysts gathered to help inform President John F. Kennedy during that perilous Cold War period. This is adapted from his remarks at a Ploughshares Fund conference October 26 in Washington.