On October 10, the international community commemorated the 50th anniversary of the entry into force of the Outer Space Treaty. This landmark instrument codified the foundation of outer space law and established the shared objective of maintaining space as a realm of peace. It was central in ensuring that the Cold War arms race did not extend beyond the earth’s surface. Yet, it did not aim to comprehensively solve all possible challenges to outer space security. Concerns relating to the weaponization of space were left for future deliberations. 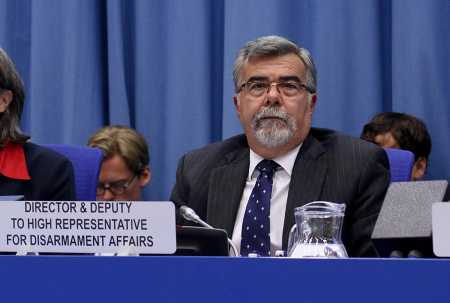 The preservation of outer space for peaceful purposes has been regarded as an essential step necessary for the United Nations to accomplish its ultimate objectives in the field of disarmament since UN General Assembly Resolution 1148 in 1957 [calling for measures to “ensure that the sending of objects through space shall be exclusively for peaceful and scientific purposes”]. Yet despite the subsequent conclusion of five international treaties governing activities in outer space, some aspects of the legal regime meant to prevent outer space from becoming a realm of conflict remain largely underdeveloped. For instance, there appears no dispute that the right to self-defense is applicable to activities in outer space. Yet, there remains a lack of common understanding of how this right could be applied in conformity with international law and without resulting in severe and long-lasting consequences.

Although we have yet to witness any active arms race in outer space, many concepts for the placement of disruptive and destructive counter-space capabilities have been studied, developed, and tested. Anti-ballistic missile systems deployed today could function as anti-satellite weapons. Secretary-General António Guterres has described our world as one of new and old conflicts woven in a complex web. At the same time, we live in an era of exponential acceleration in the rate of scientific and technological development. These trends point to an increase in potential for the rapid emergence of new military capabilities to finally tip the balance and result in the uncontrolled expansion of armed conflict into outer space. Such an outcome could have unimaginable consequences.

It is encouraging that the United Nations appears to be experiencing a renaissance in its efforts to increase security and sustainability in outer space and to prevent an arms race. Since 2013, the General Assembly has encouraged and subsequently called on all member-states to review and implement the proposals of the group of governmental experts on transparency and confidence-building measures (TCBMs) in outer space activities. Entities within the UN system have established coordination mechanisms to assist with implementation. There appears to be a high level of interest in pursuing deliberations on TCBMs in the UN Disarmament Commission on the basis of a joint proposal by China, the Russian Federation, and the United States. The Committee on the Peaceful Uses of Outer Space is working to finalize next guidelines on the long-term sustainability of outer space, a number of which address international security matters and TCBMs.

Finally, China and Russia have proposed the establishment of a new expert group to further the elaboration of legally binding measures to prevent an arms race in outer space. If approved by the General Assembly, this group could help narrow differences on how
the outer space legal regime could be further codified and developed, pending the end of the stalemate at the Conference on Disarmament.

Thomas Markram is director and deputy to the UN High Representative for Disarmament Affairs. This is adapted from his remarks October 12 in New York to the UN General Assembly First Committee.

The Hegemon’s Tool Kit: US Leadership and the Politics of the Nuclear Nonproliferation Regime