– Amb. Thomas Hajnoczi
Chair, MTCR
May 19, 2021
Missing Voices: The Continuing Underrepresentation of Women in Multilateral Forums on Weapons and Disarmament

The recently adopted Treaty on the Prohibition of Nuclear Weapons contains much that is unprecedented for an international nuclear weapons agreement.

Consistent with the treaty’s humanitarian foundations, its preamble recognizes victims of nuclear weapons use and testing.1 An article on victim assistance obligates states-parties for the first time to respond to affected individuals’ rights and needs through an international framework. Obligations on environmental remediation represent a similarly novel step forward. The preamble’s recognition of the disproportionate impact of nuclear weapons activities on indigenous peoples is also a first for arms treaties. These are major achievements. 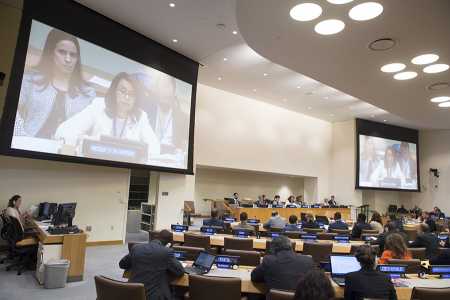 There is a further element of the preamble that is welcome and unprecedented in arms treaties: the commitment to “supporting and strengthening the effective participation of women in nuclear disarmament.” The treaty recognizes that “the equal, full and effective participation of both women and men is an essential factor for the promotion and attainment of sustainable peace and security.”2 This recognition and commitment is useful and significant for highlighting the need for change and for offering the opportunity to review progress at future meetings of the treaty’s parties.

This article looks at some of the patterns in women’s representation at international meetings of multilateral forums dealing with arms matters in recent years. The gender picture is currently far from balanced. Although this article looks at the numbers, achieving equal participation in multilateral forums is a matter that goes beyond securing parity in attendance and speakers at meetings. Further, successfully integrating gendered perspectives and improved attitudes to gender equality could be of greater significance than simple numerical equality to the outcomes these forums can generate for women and men affected worldwide by the weapons issues they discuss. These are all important issues for policymakers and civil society to consider in addressing gender and marginalization in multilateral forums.

Gender Imbalance at the Ban Talks

The final treaty text recognizes the importance of women’s participation, but imbalances in representation were seen at the negotiations on the prohibition treaty, where 31 percent of registered country delegates were women3 and women gave 29 percent of publicly available country statements.4 Although noteworthy that the negotiations were led by Costa Rican Ambassador Elaine Whyte Gómez, women headed only 19 (15 percent) state delegations. Thirty-one percent of delegations were composed entirely of men, with 3 percent of delegations all female. On the composition of the 125 registered country delegations, 65 had more men than women (including 39 all-male delegations); 15 had equal numbers of men and women; and 45 had more women than men (including four all-female delegations).5

These patterns are nevertheless higher than the averages seen in data analyzed by Article 36 on women’s participation on state delegations at 13 multilateral forums and processes dealing with weapons and disarmament between 2010 and 2014.6 Those forums and processes included those dealing with conventional weapons and weapons of mass destruction.7 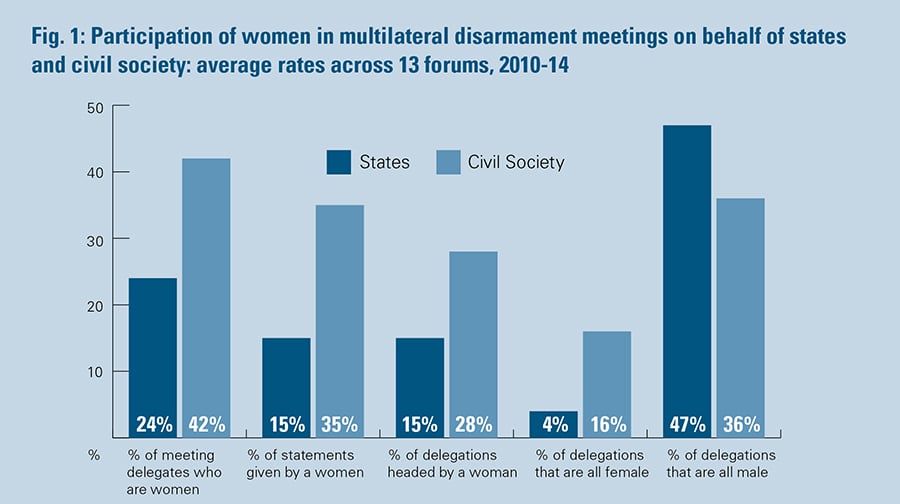 The patterns recorded at the prohibition treaty negotiations, although showing significant inequality, may therefore be part of a general trend toward more equal representation in such forums. If the current rate of progress is maintained, however, achieving equal gender representation could take many decades.

The gender balance within country delegations also starkly illustrated the overrepresentation of men in these forums and processes. Only 10 of the 195 countries and territories for which Article 36 gathered participation data had equal numbers of men and women on their delegations on average, across five years of the meetings of 13 forums. One hundred sixty countries’ delegations had more men than women on average. Five did not include women on any delegations for the meetings for which data were available (fig. 2). 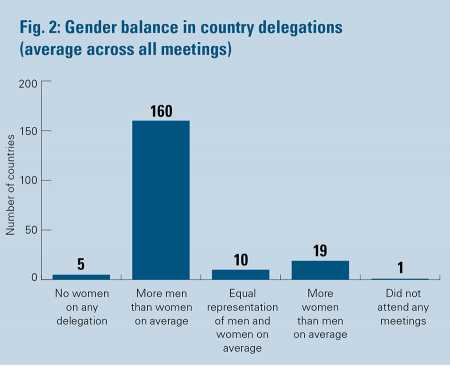 This pattern in the data appears to indicate the importance of women’s leadership to the question of representation, but it cannot reveal the mechanism. Initiatives to increase the proportion of women in higher positions in countries’ foreign services may accelerate the pace of change toward more equal representation.

Country income group, region, and women’s representation on state delegations
Analysis revealed variations in the representation of women on country delegations between regional groups and countries of different income categories.10

Article 36’s broader study showed that lower-income countries were significantly underrepresented in multilateral disarmament forums, indicative of their broader marginalization.11 Why these countries have lower average rates of women’s representation cannot be determined from this data, but it suggests that, in addressing issues of underrepresentation, it is important to investigate how different forms of marginalization may intersect.

The patterns described illustrate one aspect of the relative marginalization of women in international forums, recognition of which has grown over recent years. Women’s marginalization, however, is an issue that goes far beyond international forums and specific policies that can be adopted in relation to them. Yet, some recommendations can be made. 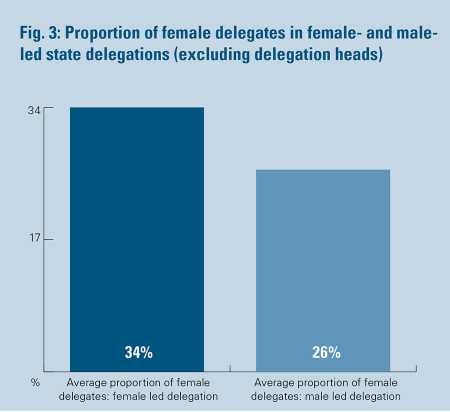 A first necessary step to addressing patterns of underrepresentation is the consistent monitoring and analysis of data, which should be supported by states and others, whether done by international or official bodies or civil society monitoring organizations.12 Highlighting patterns and assessing any steps taken to address them against available data represent a first level of action.

Article 36 interviewed a limited number of representatives from states, international organizations, and civil society for its study. Most state respondents stated that women’s representation was an important issue for their country, with some considering that they were likely performing well without a formal policy (a national policy on gender balance or diversity was only reported by one respondent). This was clearly unsupported by the data collected. Others welcomed initiatives to raise awareness on this issue, including the civil society initiative on all-male panels.13 States should highlight the issue of underrepresentation in the appropriate forums to keep this on the political agenda and adopt formal policies on it nationally.

Steps such as increasing women’s leadership, working regionally, and examining the intersection of different forms of marginalization could have an impact on women’s representation in international forums and processes on arms. Where states are involved in the administration or funding of sponsorship programs for meetings of international forums, they should consider adopting policies, such as that suggested by the UN Development Programme, requiring that half of any budget be spent on sponsoring men and half on women, with funding to be held back where funds are unspent in either category. Such policies can assist in the greater inclusion and increased capacity of female experts who may be overlooked due to wider structural factors, although it would not directly reach unsponsored delegations. 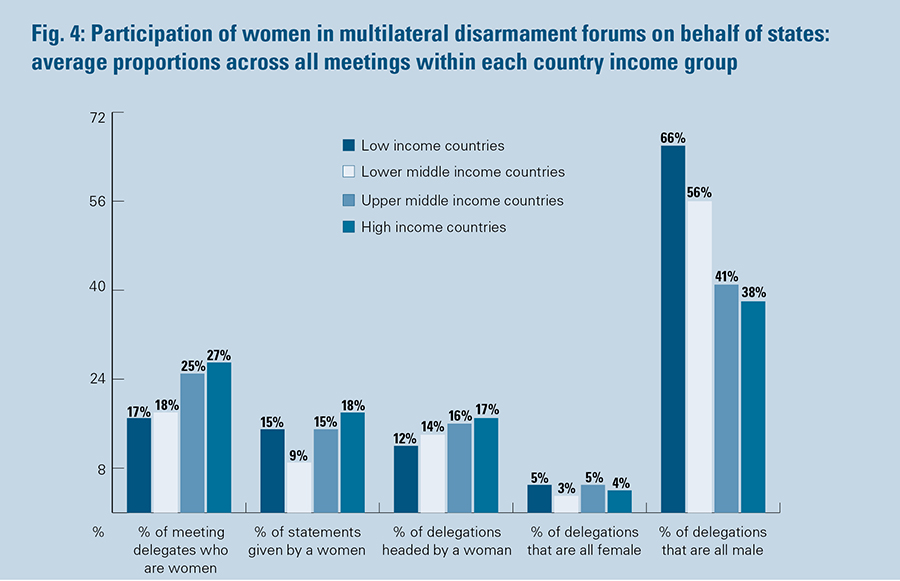 Gender intersects with arms issues in numerous ways, of which the underrepresentation of women at diplomatic meetings is one. For example, gendered discussion of violence and weapons, which may frame certain weapons as symbols of masculine strength and women as being in need of male protection, can shape how disarmament issues are addressed, as well as exacerbate women’s exclusion from these processes.14 Women, men, boys, and girls also can be exposed to different patterns of violence and affected differently by specific weapons and practices.15

The achievement of the equal representation of men and women at international meetings would not guarantee that women’s voices would be heard equally or that processes or forums dealing with arms would adequately address gendered issues. Doing so is not a product of the sex of the individuals involved in discussions. Fundamentally challenging the framing of discussions, how women are addressed within them, and facilitating the promotion of progressive initiatives by women and men must be addressed in order to achieve this.

Nevertheless, it is important to confront women’s underrepresentation and other patterns of marginalization in these forums alongside other objectives, such as ensuring the participation of those that have been most affected by the issues under discussion and the consideration of humanitarian perspectives. States and civil society can adopt policies and undertake monitoring and analysis toward these objectives.

4. See Reaching Critical Will, “Statements From the Nuclear Weapon Ban Treaty Negotiations,” 2017, http://www.reachingcriticalwill.org/disarmament-fora/nuclear-weapon-ban/statements. Data on speaking in closed sessions are not available.

5. Article 36 acknowledges gender diversity beyond the binary categorization of “men” and “women.” These are used in this paper as the categorizations available in the source data discussed.

6. During 2015 and 2016, Article 36 conducted a study into patterns in underrepresentation at multilateral forums dealing with weapons and disarmament, from which this article draws. For the full results and notes on methodology, see Elizabeth Minor, “Disarmament, Development and Patterns of Marginalisation in International Forums,” Article 36, April 2016, http://www.article36.org/wp-content/uploads/2016/04/A36-Disarm-Dev-Marginalisation.pdf. See also “Women and Multilateral Disarmament Forums: Patterns of Underrepresentation,” Article 36, October 2015, http://www.article36.org/wp-content/uploads/2015/10/Underrepresentation-women-FINAL1.pdf. (containing further information on methodology.)

9. Data on the sex of speakers was much more limited than on that of attendees. See “Women and Multilateral Disarmament Forums.”

12. Article 36’s project relied heavily on data collected by Reaching Critical Will in the course of its work to monitor disarmament forums.

Elizabeth Minor is an adviser at Article 36, a nonprofit group based in the United Kingdom working to prevent harm from nuclear and other weapons. The name refers to Article 36 of the 1977 Additional Protocol I of the Geneva Conventions that requires states to review new weapons, means, and methods of warfare.