North Korea’s test of a ballistic missile capable of longer ranges poses an immediate challenge to newly elected South Korean President Moon Jae-in, who campaigned on an engagement-oriented approach to dealing with Pyongyang. North Korean leader Kim Jong Un is showing no sign of making that easy as he continues to defy international demands that he halt nuclear weapons activities and missile testing.

The missile tested May 14 is a new system that North Korea debuted a month earlier at its parade celebrating the nation’s founder, Kim Il Sung. (See ACT, May 2017.) Known as the Hwasong-12, the missile likely is an intermediate-range ballistic missile, meaning its range is between 3,000 and 5,500 kilometers, which would put Guam within striking distance but fall short of reaching the continental United States. The test was intended to verify “the tactical and technological specifications” for a system “capable of carrying a large-size heavy nuclear weapon,” the state-run Korean Central News Agency said. 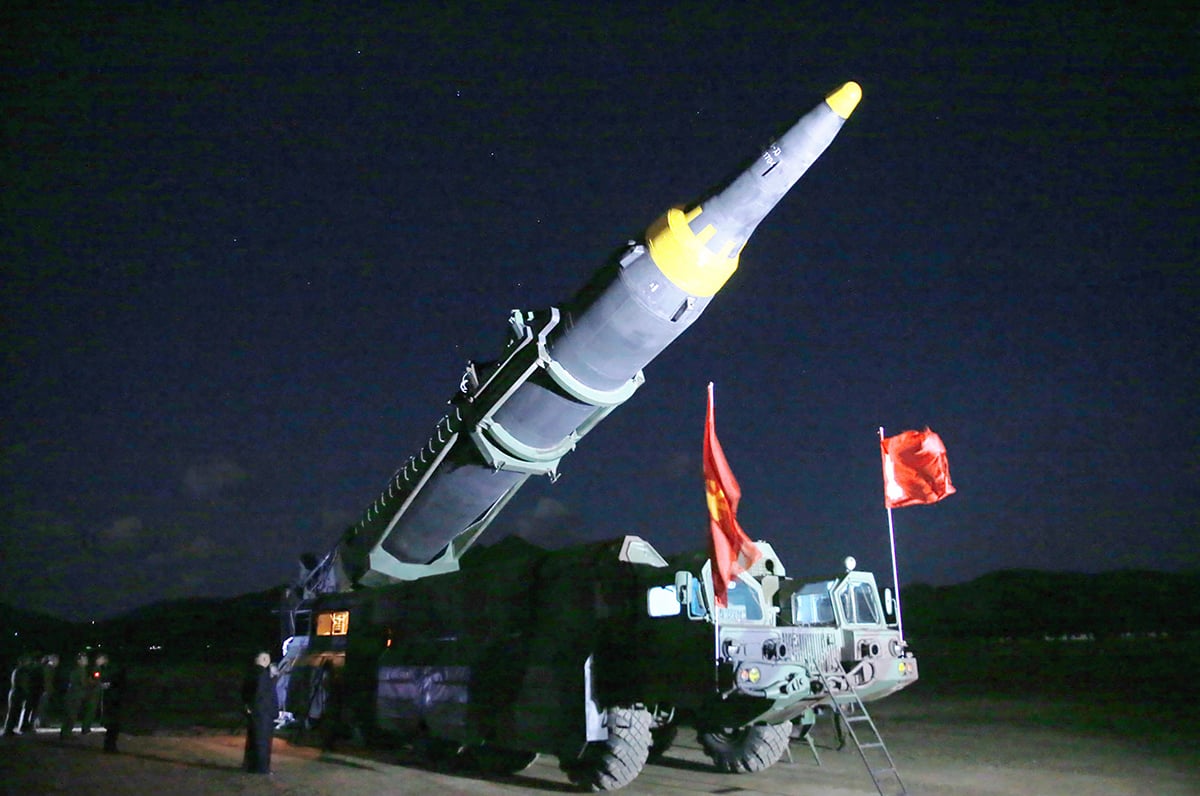 North Korea tested the missile at a lofted trajectory, so it flew higher than a normal flight pattern and traveled about 700 kilometers to splash down in the Sea of Japan. David Wright, co-director of the Global Security Program at the Union of Concerned Scientists, used data from the test to calculate a 4,800-kilometer range at a standard ballistic missile trajectory, according to his organization’s blog, “All Things Nuclear.” The lofted trajectory was likely used to avoid the missile splashing down too close to another country.

The test came just four days after Moon won South Korea’s presidential election on May 10. He was sworn in immediately to fill the vacancy left by Park Geun-hye, who was impeached in December 2016.

Moon’s openness to talks with Pyongyang marks a change from Park’s more hard-line policy toward North Korea. Moon has described his policy as moving away from the “pressure only” to “pressure with pragmatic engagement.”

For instance, Moon has suggested that he might reopen the Kaesong Industrial Complex. Kaesong, located on the North Korean side of the border, provides space for South Korean companies to manufacture products using North Korean labor. The complex was closed in 2016 during a period of increased tensions between Pyongyang and Seoul following nuclear and missile tests by North Korea.

U.S. Secretary of State Rex Tillerson reiterated the U.S. policy toward North Korea when meeting with South Korea’s special presidential envoy, Hong Seok-hyun, on May 18. Tillerson was reported in the South Korean press as saying that talks with North Korea can begin if Pyongyang refrains from nuclear and missile testing and is willing to trust that Washington not undertake hostile acts toward it. 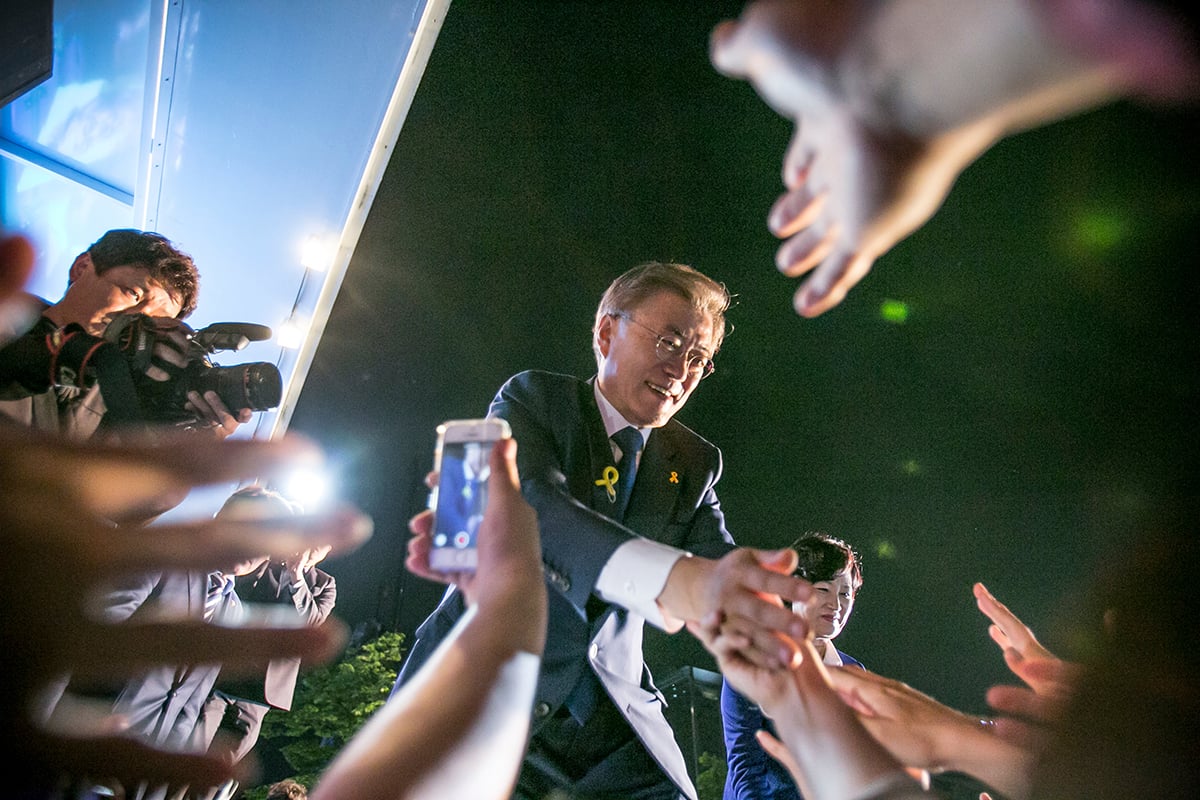 Washington’s statement after the missile test, however, took a more strident tone. The White House statement on May 13 called North Korea a “flagrant menace” and said all states must implement stronger sanctions against North Korea. The statement also noted Washington’s “ironclad commitment” to U.S. allies.

Moon will come to Washington in late June for a summit with U.S. President Donald Trump. In announcing the summit, Moon’s office said on May 16 that the two states will look for “bold and practical” steps to take on North Korea.

Nikki Haley, U.S. ambassador to the United Nations, told reporters ahead of a May 16 consultation on North Korea that the United States is ready to “tighten the screws” on Pyongyang and will target sanctions against any country that is “supplying or supporting North Korea.”

Russian President Vladimir Putin also condemned the missile test and said on May 15 that Moscow is “categorically against the expansion of the club of nuclear states, including through the Korean Peninsula.” But Putin, who was on a trip to China at the time, said that “intimidating” North Korea was not the right path forward.

Moon’s administration may review the decision to deploy the Terminal High Altitude Area Defense (THAAD) system in South Korea. The missile defense system became operational on May 2, according to U.S. officials.

Despite the operational status of the system, U.S. national security adviser H.R. McMaster said that he was aware that there were procedural concerns over the THAAD deployment.

McMaster’s comments came after Hong told him that South Korea’s National Assembly  needed to discuss the THAAD deployment. Moon made comments to that effect, namely that the correct procedure was not followed for deciding to deploy the THAAD system, during his campaign.

The United States and South Korea agreed on the THAAD deployment in July 2016 to the displeasure of China and Russia. (See ACT, September 2016.)

South Korea is working on its own ballistic missile defense, known as the Korea Air and Missile Defense System. Moon told the military to speed up development of the system after the North Korean ballistic missile test on May 14.