“[My time at ACA] prepared me very well for the position that I took following that with the State Department, where I then implemented and helped to implement many of the policies that we tried to promote.”
– Peter Crail
Business Executive for National Security
June 2, 2022
Toward a Treaty Prohibiting Nuclear Weapons 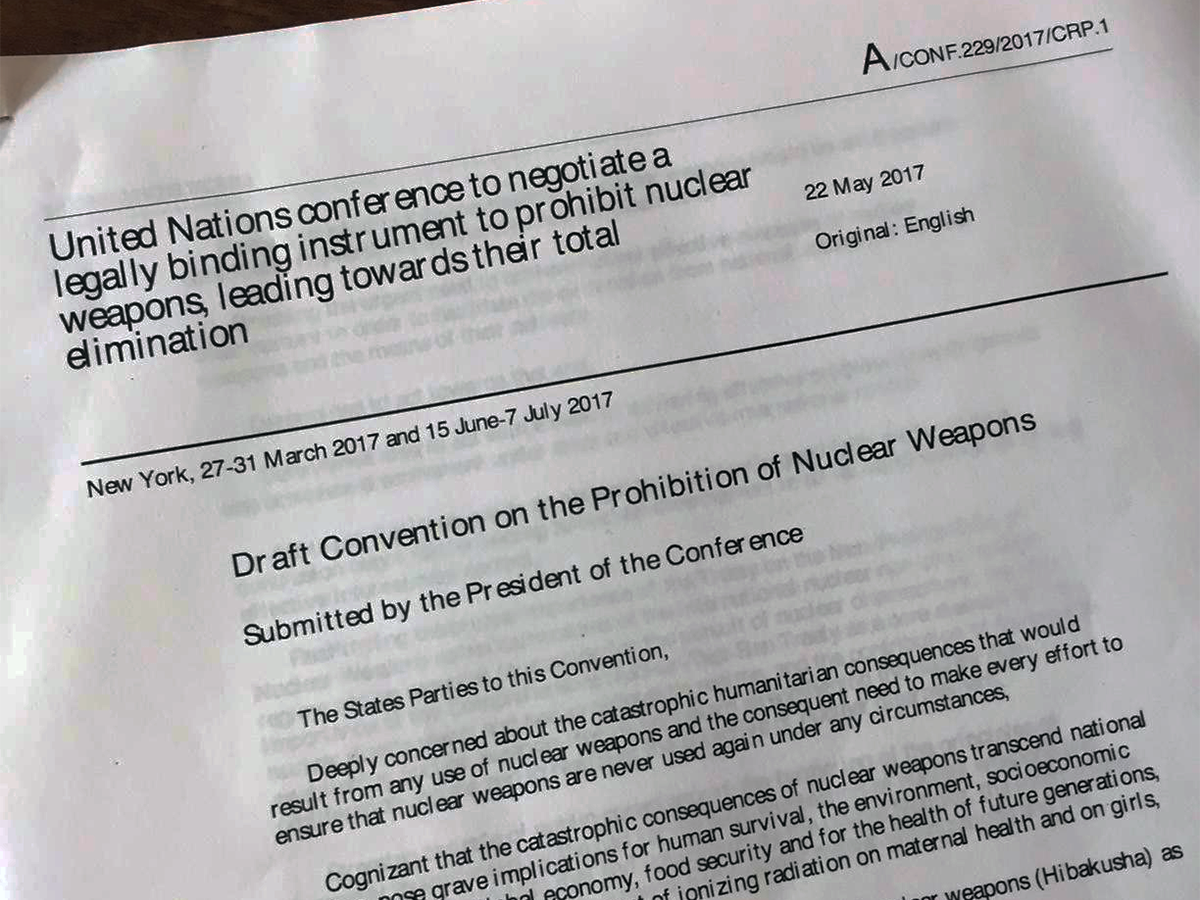 The United States and Russia have reduced their Cold War stockpiles and verifiably banned nuclear explosive testing. But some 15,000 weapons remain, additional nuclear-armed states have emerged, and the risk of nuclear weapons use is rising.

Key NPT disarmament commitments made in 2010 are unfulfilled. The future of key nuclear arms control treaties, including the New Strategic Arms Reduction Treaty and the Intermediate-Range Nuclear Forces Treaty, are in doubt. The 1996 Comprehensive Test Ban Treaty (CTBT) has not formally entered into force. Global fissile material stocks remain very substantial. Worse still, the world’s nine nuclear-armed states are replacing, upgrading, or in some cases expanding their arsenals.

The conclusion of such a treaty is now within sight. From June 15 to July 7, representatives from some 130 states and civil society groups will try to finalize a draft treaty text issued May 22 by the president of the negotiating conference, Ambassador Elayne Whyte Gómez of Costa Rica.

The draft preamble correctly notes that “further effective measures” will be necessary to achieve a world free of nuclear weapons and that the “use of nuclear weapons would be contrary to the rules of international law in armed conflict.” The draft also recognizes the central role of the NPT, the CTBT, and nuclear-weapon-free-zone treaties for achieving disarmament.

At its core, the new treaty would prohibit states-parties from using, testing, developing, producing, manufacturing, or otherwise acquiring, possessing, stockpiling, transferring, or receiving control over nuclear weapons. It would also require each state to prohibit and prevent the stationing, installation, or deployment of nuclear weapons on their territory (but does not prohibit “transit”). These latter provisions would affect the five NATO states that still host U.S. nuclear weapons.

The text provides a solid basis for a final agreement, although, like any first draft, it will under go refinements. As negotiators make adjustments, they should ensure the treaty allows for the establishment of effective means for disarmament verification on a case-by-case basis, including special anytime, anywhere access by the International Atomic Energy Agency as may be required to verify that a nuclear-armed state has completely eliminated its arsenal and related facilities and inventory of materials. Negotiators also should make clear that the prohibition on nuclear explosive testing in the new convention does not detract from or offer an alternative to states’ obligations under the CTBT, including its nuclear test explosion monitoring and inspections regime.

The nuclear-weapon states have dismissed the initiative as irrelevant and said it may undermine support for the NPT. In reality, efforts to reduce the salience of nuclear weapons are fundamentally consistent with NPT objectives and the common pursuit of a world without nuclear weapons.

It is also a healthy challenge to nuclear deterrence orthodoxy, which incorrectly and dangerously assumes that military postures threatening large-scale use of nuclear weapons are sustainable and will not fail. It is a reminder that, for a majority of the world’s states, these weapons of mass destruction are a security liability, not an asset.

The emerging treaty has the potential to further delegitimize nuclear weapons as instruments of national power and to strengthen the legal and political norms against their possession and use. At a time when the nuclear danger is growing, these contributions are especially useful.

Although the emerging prohibition convention can help encourage further action on disarmament, additional and difficult work lies ahead. Prohibition treaty supporters, skeptics, and opponents must find new and creative ways to come together to strengthen the NPT regime, in part by advancing new and effective disarmament measures, while easing the growing tensions between nuclear-armed states that make progress difficult and increase the danger of nuclear use.

Leaders from the nuclear-armed states who say nuclear disarmament can be achieved only in a progressive, step-by-step fashion must be willing and able to walk the talk. Such measures include securing the ratifications needed to bring the CTBT into force; reviving the moribund U.S.-Russian arms control dialogue; bringing China, India, and Pakistan further into the nuclear risk reduction and disarmament process; avoiding the introduction of new and destabilizing strategic weapons systems and technologies; concluding legally binding negative nuclear security assurances for non-nuclear-weapon states; and conducting smart and sustained diplomacy to halt and reverse North Korea’s dangerous nuclear pursuits.

The coming nuclear weapons prohibition treaty is not an all-in-one solution, but it promises to be a historic and valuable leap forward.