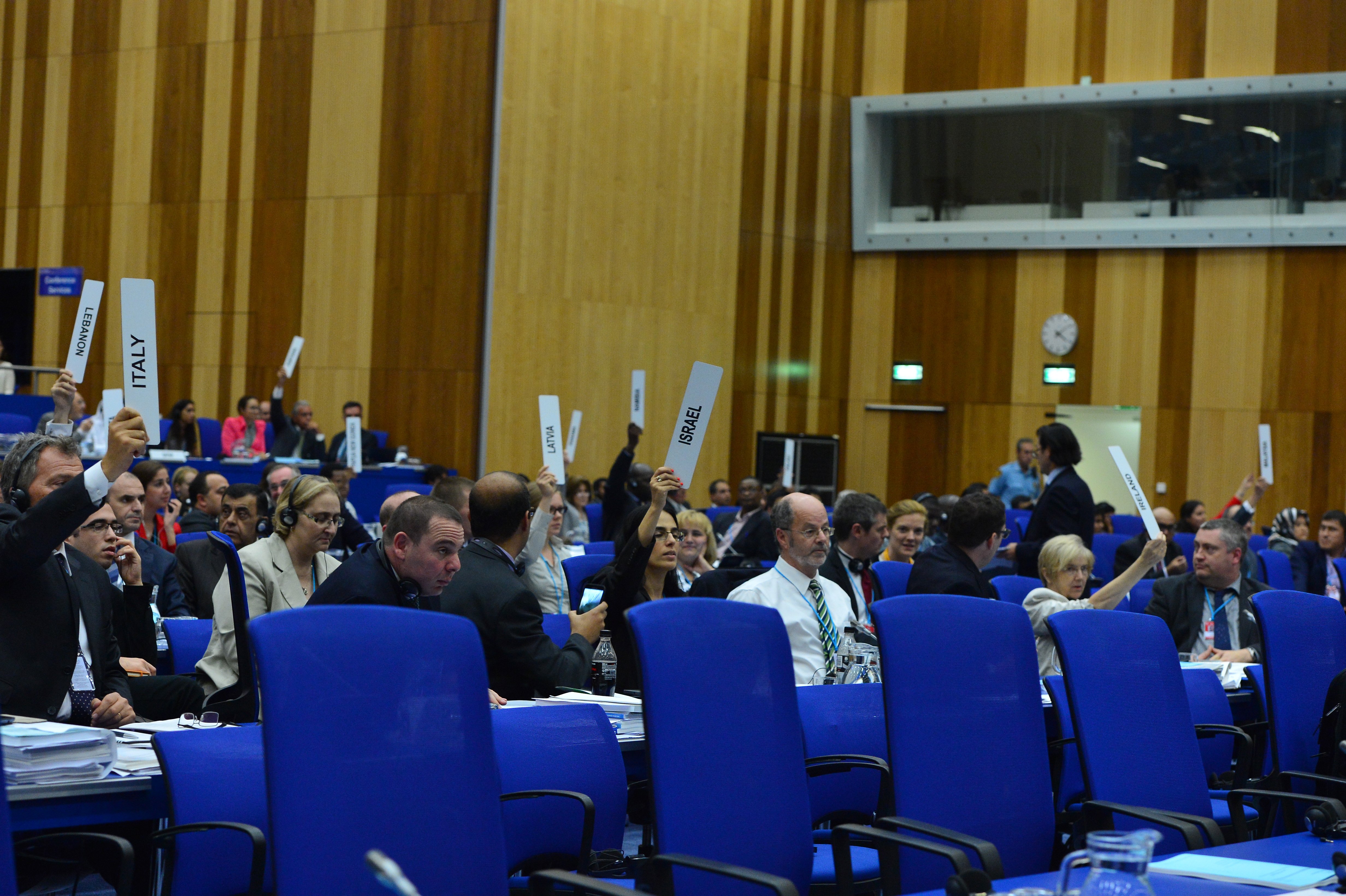 The countries of the International Atomic Energy Agency (IAEA) voted down a resolution critical of Israel’s nuclear program on Sept. 17 after the Arab League decided to move forward on the measure despite Israel’s attempts to persuade Egypt not to pursue it.

During the agency’s annual week-long General Conference in Vienna, IAEA member states voted 61-43 against the resolution, with 33 states abstaining. The resolution, submitted by Egypt on behalf of the 18 Arab League states that are IAEA members, called on Israel to put its nuclear facilities under IAEA safeguards and join the nuclear Nonproliferation Treaty (NPT) as a non-nuclear-weapon state.

Israel does not publicly admit to possessing nuclear weapons, but is widely believed to have an arsenal of approximately 80 to 100 warheads. It is an IAEA member and has placed some of its nuclear facilities under agency safeguards.

Prior to the IAEA conference, an Israeli delegation, which included national security adviser Yossi Cohen, traveled to Cairo to meet with Egyptian Foreign Minister Sameh Shoukry. An Israeli official familiar with the trip said in a Sept. 17 interview that the delegation requested that Egypt drop the resolution or reconsider its approach.

The official called the defeat of the resolution a “victory for common sense,” but said it was unfortunate that consideration of it “diverted time and attention” from the agency’s core concerns at the conference.

Israeli Prime Minister Benjamin Netanyahu told reporters after the Sept. 17 vote that he had called 30 world leaders to ask them not to vote for the resolution. The United States voted against the resolution.

The Egyptian Foreign Ministry did not respond to a request for comment.

In an Aug. 6 letter to IAEA Director-General Yukiya Amano, Israel formally objected to the resolution’s consideration at the conference. In the letter, Israel’s permanent representative to the IAEA, Merav Zafary-Odiz, called the resolution “contentious, biased, and fundamentally flawed.” The letter argued that Israel has “never been the subject of an investigation” by the IAEA, whereas Arab League members Iran, Iraq, Libya, and Syria were found to be in “flagrant violation” of their international commitments under the NPT in the past.

The NPT prohibits member countries that do not have nuclear weapons from taking any steps to develop such weapons.

The letter from Zafary-Odiz said that moving forward on the resolution targeting Israel will only “politicize the IAEA and harm its creditability.”

This is the third year in a row that the Arab League unsuccessfully put forward a resolution on Israel’s nuclear program. Last year, the vote was 58-45.

A similar nonbinding resolution passed only once, in 2009. Similar resolutions were voted down in the years prior to the successful 2009 vote. The Arab states did not put the measure on the agenda in 2011 and 2012, saying they hoped that Israel would be more likely to attend a meeting on establishing a zone free of weapons of mass destruction (WMD) in the Middle East if it did not feel singled out for condemnation in the region.

The Arab states revived the measure in 2013 after the meeting on the WMD-free zone did not take place as planned in December 2012.