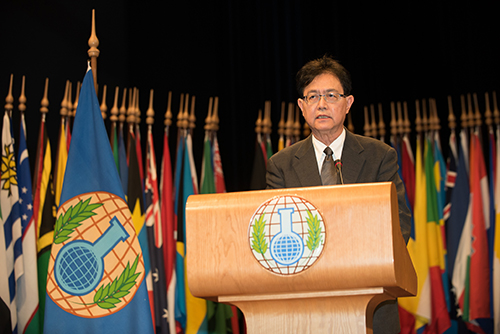 Russia now plans to complete destruction of its chemical weapons stockpile by the end of 2020, a five-year extension of its previously announced timetable, according to a Dec. 1 Russian statement.

In the statement, which came on the first day of the week-long annual conference in The Hague of countries that are parties to the Chemical Weapons Convention (CWC), Russia said it was “fully committed” to the convention and would complete the destruction as quickly as possible. But Moscow “will do so based on the actual economic situation as it unfolds, while following all safety standards that ought to be met during the implementation of such a complex technological task,” the statement said.

In the statement, Russia said it planned to complete the work at four of its active destruction facilities—Leonidovka, Maradykovsky, Pochep, and Shchuch’ye—this year, but that work at the Kizner facility would continue through 2020.

Under the CWC, countries that possessed chemical weapons were supposed to eliminate their stockpiles by April 29, 2012, the 15th anniversary of the treaty’s entry into force. Russia and the United States, which accounted for the vast majority of chemical arms declared under the CWC, did not meet the deadline. Libya, which declared a much smaller stockpile, also did not meet the deadline.

In a document adopted at their 2011 annual meeting, the CWC parties essentially recognized that the three countries would miss the deadline, but said they should complete the work “in the shortest time possible.” The document spelled out reporting and monitoring requirements for the destruction work. (See ACT, January/February 2012.)

Russia had set the 2015 target date in 2010. (See ACT, July/August 2010.) At the time, some experts expressed skepticism about the feasibility of that timetable.

Earlier this year, Moscow indicated that it would not be able to meet the schedule. According to a May 2014 report by the Executive Council of the Organisation for the Prohibition of Chemical Weapons (OPCW) describing a visit to Russia the previous month by members of the council, a senior Russian official, Col. Gen. Victor Kholstov, told the delegation about several obstacles for the work at Kizner.

According to the council’s report, Kholstov described certain munitions that are particularly expensive and time consuming to destroy because of their complex configuration. The report cited Kholstov as saying that funds were moved from Kizner to the facilities handling the complex munitions, delaying completion of the construction work at Kizner. Kholstov also said that recently adopted safety regulations have had a particular impact on the technology used at Kizner, further delaying the work there, the report said.

At the council’s meeting in July 2014, Russia provided information that work at Kizner would continue beyond 2015, according to the official report of that meeting. Russia apparently did not specify a new target date at that time.

The current U.S. target date for eliminating its chemical stockpile is 2023.

In his remarks, Üzümcü praised the OPCW’s “truly remarkable achievements” in the successful effort to eliminate Syria’s declared chemical weapons, but noted that some issues relating to Syria’s chemical weapons program remain to be resolved.

On one of those issues, the destruction of 12 chemical weapons production facilities, he reported that contracts with the “commercial entities” that are to carry out the destruction had been finalized at the end of November. In a Jan. 5 e-mail to Arms Control Today, OPCW spokesman Michael Luhan said destruction of the first facility had begun Dec. 24 and was “ongoing.”

Another issue is the completeness of the declaration of its chemical weapons program that Syria made when it joined the CWC in 2013. In her Dec. 3 remarks to the meeting of CWC parties, Rose Gottemoeller, U.S. undersecretary of state for arms control and international security, said that “chemical weapons capabilities may very well remain in the hands of the Syrian government.”

Üzümcü said in his statement that the OPCW would continue its consultations with Syria on the country’s declaration. Another continuing effort, he said, is the work of the OPCW team that determined “with a high degree of confidence” that chlorine had been used as a weapon in three villages in the northern part of the country last year, when Damascus already was a CWC party. (See ACT, October 2014.)

With Syria’s accession to the CWC, six countries—Angola, Egypt, Israel, Myanmar, North Korea, and South Sudan—remain outside it. At the December conference, Myanmar Deputy Foreign Minister U Thant Kyaw said his country was on the verge of ratifying the treaty.

During remarks at a Dec. 12 conference in Washington sponsored by the Arms Control Association, Peter Sawczak, head of government relations and political affairs in the OPCW’s external relations division, said he expected Myanmar to ratify the CWC “in short order.”

Sawczak also highlighted another nonparty, Angola, which began a two-year term on the UN Security Council on Jan. 1. “I think a lot of states-parties have delivered the message that it’s not a good look for a member of the Security Council not to be a state-party to cornerstone arms control treaties” such as the CWC, he said.

CORRECTION: The original version of this article misstated the conclusion of the report by an investigative team from the Organisation for the Prohibition of Chemical Weapons into allegations of weapons use of chlorine in Syria. In its report, the team said it had a “high degree of confidence” that chlorine had been used as a weapon, but it did not assign responsibility for the chlorine use to any party.