Iran and six world powers met in Geneva in December to continue talks on a comprehensive nuclear agreement, marking the first round of meetings after the parties decided to extend the negotiations.

When Iran and the P5+1 (China, France, Germany, Russia, the United Kingdom, and the United States) agreed on Nov. 24 to extend the talks, they set a goal of reaching a political agreement within four months. (See ACT, December 2014.) The parties aim to complete the technical annexes by June 30.

Iranian Foreign Minister Mohammad Javad Zarif told reporters on Dec. 17 that the talks earlier that day had taken place in a “good atmosphere” and that “good steps” were taken. Zarif, who leads Iran’s negotiating team, said that “the world needs this agreement” in light of global challenges, and that reaching a deal is in the best interest of both parties.

Russian President Vladimir Putin told reporters in Moscow on Dec. 18 that the parties are “very close” to reaching a deal. 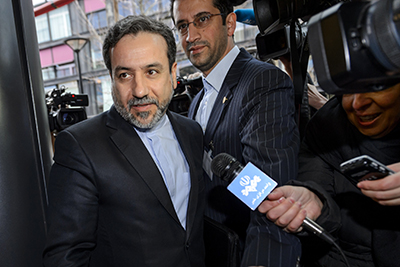 Before the talks between Iran and the P5+1, the United States and Iran met bilaterally Dec. 15-16 in Geneva.

Abbas Araqchi, Iran’s deputy foreign minister and a member of the negotiating team, said that sanctions were a focus of the meetings with the United States but that “all topics” were discussed.

The talks are scheduled to resume Jan. 18 in Geneva.

Iran maintains that its nuclear program is entirely peaceful, but the international community is concerned that Tehran could use its program to develop nuclear weapons.

In a Dec. 4 interview with PBS, Sen. Bob Corker (R-Tenn.) said that Congress should act cautiously on new legislation directed against Iran.

Corker, the incoming chairman of the Senate Foreign Relations Committee, said Congress does not want to feel “responsible for this deal falling apart” but that the new Congress will be looking for “an appropriate way” to have a say in the negotiations in 2015.

In the last Congress, lawmakers introduced several bills dealing with sanctions on Iran. One of the bills, drafted by Sens. Robert Menendez (D-N.J.) and Mark Kirk (R-Ill.), would impose additional sanctions on Iran if Tehran failed to comply with the terms of the interim agreement or if a comprehensive deal is not reached. It is not clear which of the bills will be reintroduced during the new Congress.

Corker said its “hard to understand” how the Menendez-Kirk legislation would be a problem for the negotiations.
Under the terms of the interim agreement that Iran and the P5+1 reached in November 2013, the United States agreed not to impose any additional nuclear-related sanctions on Iran. In return for limited sanctions relief and the pledge of no additional sanctions, Iran halted expansion of its nuclear program and stopped certain nuclear activities. When Iran and the P5+1 did not reach a comprehensive deal within the one-year time frame of the interim agreement, the parties agreed to extend the commitments through June 30 of this year.

U.S. Secretary of State John Kerry told reporters in Vienna on Nov. 24 that he hoped Congress would “see the wisdom of leaving us the equilibrium for a few months to be able to proceed without sending messages that might be misinterpreted and cause miscalculation.”

In a Nov. 26 e-mail to Arms Control Today, an official close to the negotiations said that, under the terms of the extension, Iran and the P5+1 agreed to obligations beyond those in the interim agreement.

The P5+1 and Iran have not made any public reference to the specific elements of the new obligations.
According to the official’s e-mail, Iran will be able to gain access to $700 million of its funds frozen in accounts overseas each month through June 30.

Iran committed to continue feeding 35 kilograms of its stockpile of 20 percent-enriched uranium oxide powder into a process for making fuel plates, the official said. The fuel plates are to be used for the Tehran Research Reactor, which produces medical isotopes, he said.

Iran’s stockpile of 20 percent-enriched uranium gas was a key concern for the P5+1 because uranium enriched to that level is more easily enriched further to weapons grade. Under the interim agreement, Tehran has taken steps to neutralize its stockpile by diluting half of the stockpile to a level of less than 5 percent-enriched uranium and converting the other half into an oxide powder form for fuel plate fabrication.

Iran committed not to convert the uranium oxide powder back into gas as part of the interim deal.

Under the terms of the extension, International Atomic Energy Agency (IAEA) inspectors are able to visit Iran’s centrifuge production workshops on a more regular basis and with little notice.

In addition, Iran pledged to refrain from pursuing enrichment using other technologies, such as lasers. Iran is known to have experimented with laser enrichment in the past. As part of a separate agreement with the IAEA, Iran provided inspectors with access to its laser center and information about its laser enrichment program last year. 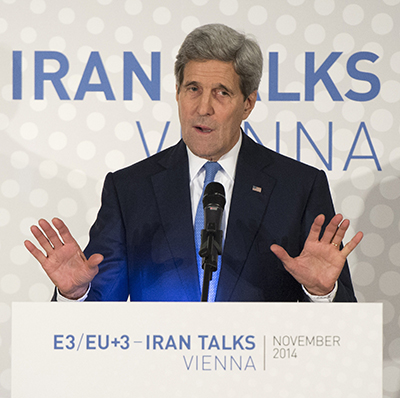 According to the official close to the talks, Iran and the P5+1 spelled out the limits to Iran’s research and development activities to clarify ambiguities about permitted activities under the interim agreement after a controversy in November.

In a Nov. 7 report, the IAEA noted that Iran was feeding natural uranium gas into one of its advanced centrifuge models, the IR-5, for the first time. The IR-5 was installed, but was not being tested with uranium gas at the time that the interim deal was reached. According to the agreement, Iran could continue its current research and development practices during the negotiations on a comprehensive accord.

Iran and some members of the P5+1 disagreed about whether testing the IR-5 with uranium was an existing practice or a new practice. Tehran said the action was permitted under the interim agreement.

The State Department did not say last November whether the United States viewed the testing as a violation, but said that Washington had raised the concern with Tehran and that Iran had agreed to stop testing the centrifuge.

The additional research and development restrictions under the extension specifically prohibit testing of the IR-5 centrifuge with uranium hexafluoride gas.

Iran said it would not test the IR-6 centrifuges in a cascade formation or the IR-2M. Iran also agreed not to continue installation of an IR-8 centrifuge that is partially installed at the Natanz Pilot Fuel Enrichment Plant. The IAEA noted in its quarterly reports that Iran began installing the IR-8 centrifuge in December 2013.

Iran is working on advanced centrifuges to replace its current operating centrifuge, the IR-1. The advanced machines would likely enrich uranium more efficiently than the IR-1 machines.