Amid mounting congressional and military concern about the program’s high cost and untested approach, the Obama administration has slowed key parts of its plan announced last year to rebuild the U.S. stockpile of nuclear warheads, raising the possibility that the initiative will not be fully implemented.

Announced in June 2013 by the National Nuclear Security Administration (NNSA), the “3+2” strategy has a sticker price of $60 billion and calls for extending the service life of five nuclear warhead types, three of which would be “interoperable” on land- and sea-based ballistic missiles, an approach that has not been tried before. Two other warhead types would be used on bombers, and two of the seven current warhead types would be retired.

Testifying before the Senate Armed Services Subcommittee on Strategic Forces on April 10, Acting NNSA Administrator Bruce Held said that the first interoperable warhead had been delayed for five years due to fiscal constraints, but warned that additional delays would “break” the stockpile strategy and “put the nation in a very difficult position.”

More delays, however, may be coming. In an April 22 e-mail to Arms Control Today, a senior Democratic congressional staffer said that the future of interoperable warheads “is uncertain because the costs seem to outweigh the benefits—very expensive, high technical risk… and no clear military requirement [for it].” He added that resolving these problems “will be very difficult, if not impossible, especially for an agency that has a long list of governance and project management problems.”

Speaking at George Washington University on March 24, former Lawrence Livermore National Laboratory Director Penrose “Parney” Albright, who supports the 3+2 plan, said, “I just don’t think it’s going to happen,” according to an account in the Nuclear Security and Deterrence Monitor.

To use insensitive explosives, the NNSA would have to use parts from two different, existing warheads; those parts never have been used together. Such combinations have never been introduced into the nuclear stockpile without nuclear tests, which the United States no longer conducts. (See ACT, September 2013.)

Insensitive explosives are already used in warheads on the Air Force’s intercontinental ballistic missiles (ICBMs) and bombers but not on the Navy’s submarine-launched ballistic missiles (SLBMs). The Navy has questioned whether the use of insensitive explosives is worth the added cost for its missiles, which spend most of their time protected inside submarines under the sea.

The 2015 stockpile plan makes clear that although the administration still supports the 3+2 plan and that near-term efforts are on track, other projects have been significantly slowed. The life extension program for the Navy’s W76 SLBM warhead is on schedule for completion in 2019, and the B61-12 gravity bomb would be produced from 2020 to 2024, a slight delay. The B61 project, costing about $10 billion, would refurbish about 400 of the gravity bombs that are used on long-range bombers in the United States and tactical fighter aircraft in Europe. Under the administration’s request, the program would be funded at $643 million for fiscal year 2015, an increase of $106 million, or 20 percent, over the fiscal year 2014 congressional appropriation. (See ACT, April 2014.)

The next warheads in the 3+2 queue, however, are increasingly in doubt. A rebuilt warhead for a new Air Force cruise missile for the new long-range bomber that the Air Force is planning has been delayed by up to three years, from 2024 to 2027. The IW-1 has been delayed from 2025 to 2030. These delays mean that key development decisions will not be made until well into the next administration, increasing program uncertainty.

Donald Cook, NNSA deputy administrator for defense programs, testified before the House Appropriations Energy and Water Development Subcommittee on April 3 that the NNSA needed to defer development of the IW-1 “based on budget availability” and that the two warhead types it would replace, the W78 ICBM warhead and the W88 SLBM warhead, “are aging as predicted. We believe we understand where they are.” The administration’s proposed budget provides no money for the next five years for this program, which is receiving $38 million in fiscal year 2014.

Albright, who resigned in October, said the IW-1 delay could undermine the entire 3+2 strategy. According to the Monitor account, Albright noted that the NNSA plans to upgrade non-nuclear parts of the Navy’s W88 warhead and said that once that happens, the Navy “almost certainly will argue” that replacing the W88 with an interoperable warhead would cost “too much money.” Albright said the Navy would prefer to simply refurbish the W88, “which is what they did on the W76.” The W76 life extension program cost $4 billion, compared to a projected $11 billion for the IW-1.

In turn, extending the service life of the W88 separately could decrease the Air Force’s incentive to refurbish the W78, which could instead be retired and replaced by the W87 as the only ICBM warhead, Albright said.

Beyond that, the proposed IW-2 and IW-3 warheads are distant prospects, with no production planned until 2034 or later, at costs of $15 billion and $20 billion, respectively.

In an April 21 e-mail to Arms Control Today, a senior Republican congressional staffer said he was concerned by the IW-1 delay, since it means also delaying refurbishment of the W78 warhead. That “adds risk to the ICBM hedge force if something ages out in the W78,” he said.

“If there isn’t meaningful work for our weapons designers, they could look outside the labs for meaningful employment,” he said. 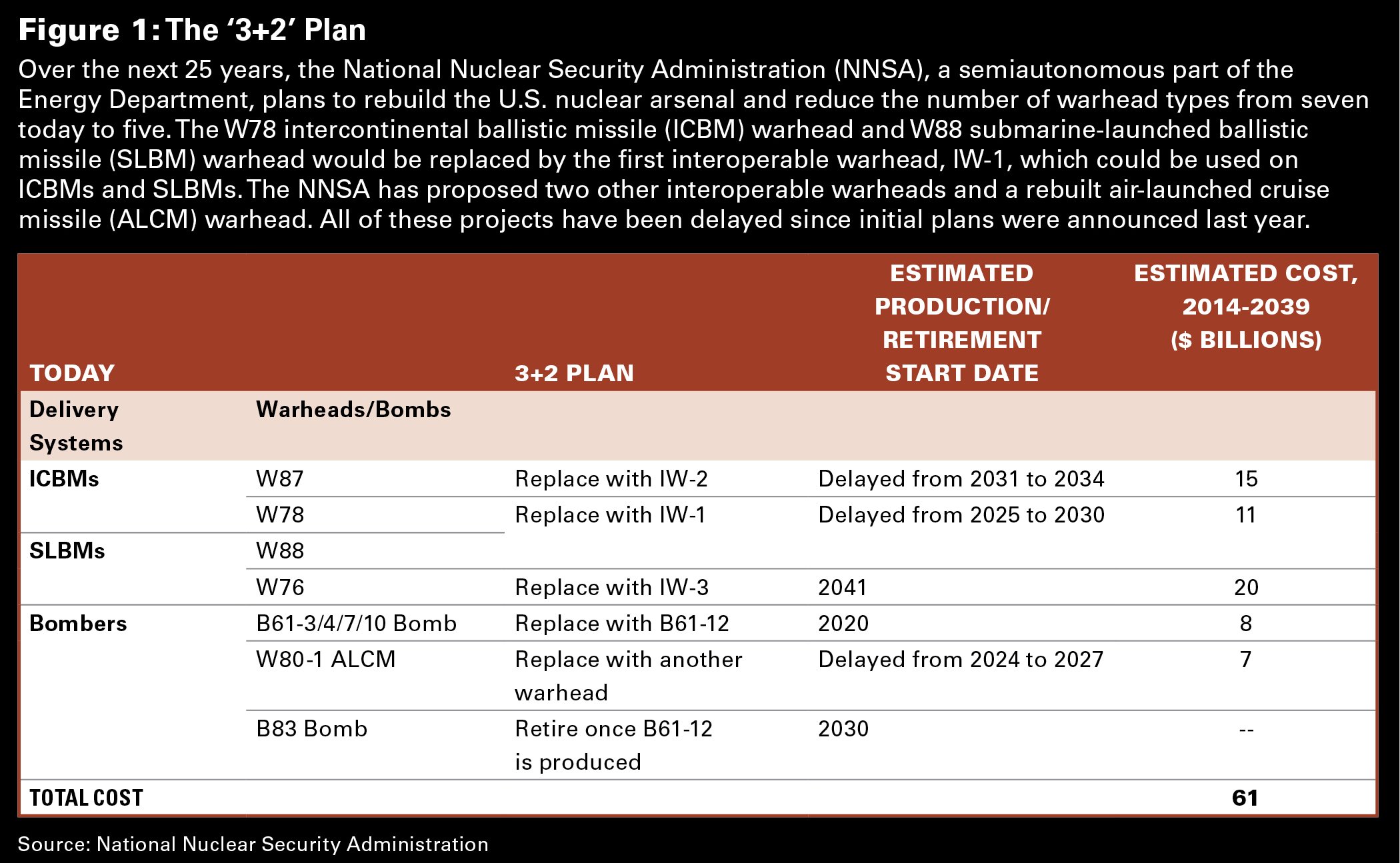