The UN Security Council on Dec. 5 unanimously approved a resolution banning the sale or transfer of weapons to the Central African Republic, where sectarian militias have been engaged in escalating violence. Resolution 2127 also bans for one year the sale or transfer of ammunition, military equipment, spare parts, and technical assistance and training to any person or entity except the country’s security forces and an African Union (AU) peacekeeping mission.

The country of 5 million people has been the scene of deadly clashes between predominantly Muslim former rebels who took power last March and Christian “self-defense” groups. The violence has spread across the mineral-rich country in recent months, displacing more than 600,000 people and raising fears of a genocide like the one that occurred in Rwanda in 1994.

In response, the French government in late November tripled the number of its soldiers in the 1,200-person AU peacekeeping mission. The U.S. government has committed $100 million to support the AU force. Samantha Power, the U.S. ambassador to the United Nations, made an unannounced trip to the Central African Republic on Dec. 20, saying she wanted to see the unfolding crisis for herself. 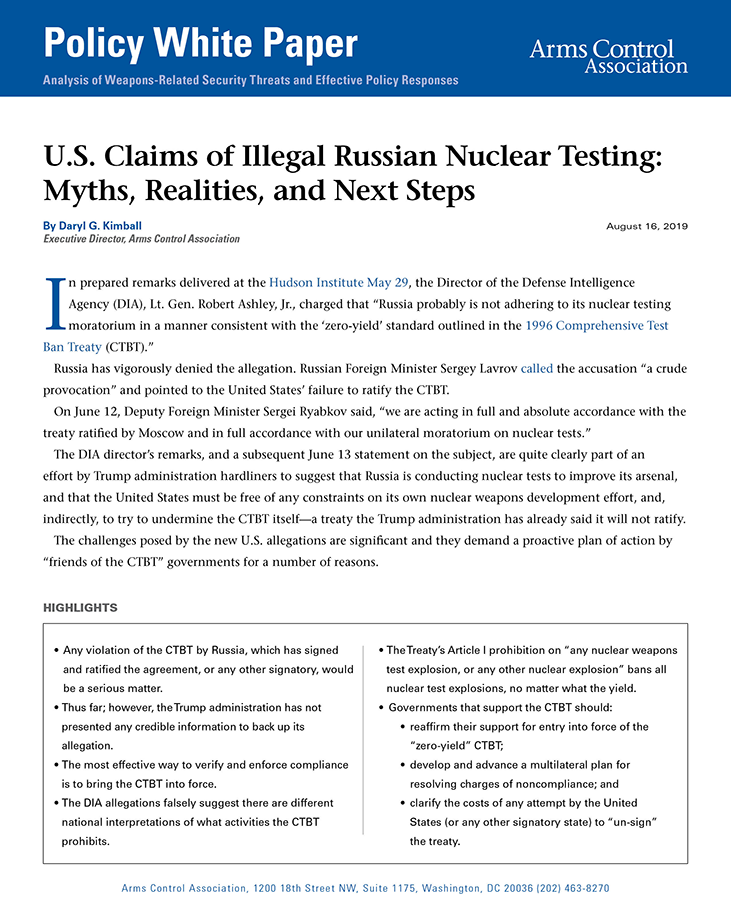 Violation of the CTBT by
Russia, which has signed
and ratified the agreement
would be a serious matter.
Read our latest Policy White Paper.

Philippe Bolopion of Human Rights Watch called the Security Council resolution “a crucial step,” but he said the effects of the arms embargo would be difficult to judge, adding that little is known about where the country’s armed groups obtain their weapons.

The Central African Republic is bordered on the south by the Democratic Republic of the Congo and to the east by South Sudan, which are home to a variety of heavily armed militias. “In a region with poor governance, small arms circulate easily and widely,” Bolopion said in a Dec. 20 interview.

The UN resolution created a committee to monitor and enforce the arms embargo and called for it to report on the embargo’s effectiveness within 60 days.