Amid increasing frustration over the pace of Syria’s removal of chemical weapons materials for overseas destruction, Syrian authorities are in talks with key countries and experts from the Organisation for the Prohibition of Chemical Weapons (OPCW) and the United Nations on a revised timetable for the removal effort, according to media reports and spokesmen for some of the parties in the negotiations.

Syria has proposed a timetable that would take until about the end of May, but the U.S. government “believes that the Syrians are more than capable of moving these chemicals to Latakia on a shorter timetable,” a State Department spokesman said in a Feb. 28 e-mail to Arms Control Today. Latakia is the port city in northwestern Syria where the Syrian government is collecting the chemicals from across the country before sending them overseas for destruction.

Under the experts’ plan, “removal of all chemicals from Syria could be done in less than 40 days,” the spokesman said. He indicated that the UN Security Council and the OPCW Executive Council would take up the issue of the revised timetable during their respective meetings scheduled for the first week of March. The experts’ plan has not been made public.

Under a schedule set last November by the Executive Council, the highest-priority materials were supposed to leave the country by Dec. 31. All other materials that are part of the overseas destruction program were to leave by Feb. 5. The rest of the approximately 1,300 metric tons of chemical agents that Syria declared is to be destroyed within the country.

The removal dates were set with an eye to a June 30 deadline for destruction of the chemical agents, which was established last September by the Executive Council and the Security Council. (See ACT, October 2013.)

Syria and its ally Russia have argued that the civil war in Syria is a primary cause of the holdup in shipping out the chemicals. (See ACT, January/February 2014.)

In a Feb. 21 statement to the Executive Council, Robert Mikulak, the U.S. ambassador to the OPCW, said 95.5 percent of the first-priority chemicals and 81.1 percent of the second-priority materials remain in Syria. He accused Syria of “continu[ing] to drag its feet.”

He cited a Feb. 6 UN Security Council press statement in which the council “noted growing concern…about the slow pace of the removal of the chemical weapons from the territory of Syria, which has placed efforts behind schedule.” At the Feb. 21 Executive Council meeting, Mary Whelan, the Irish ambassador to the OPCW, warned that “[t]he credibility of the OPCW is at stake.” 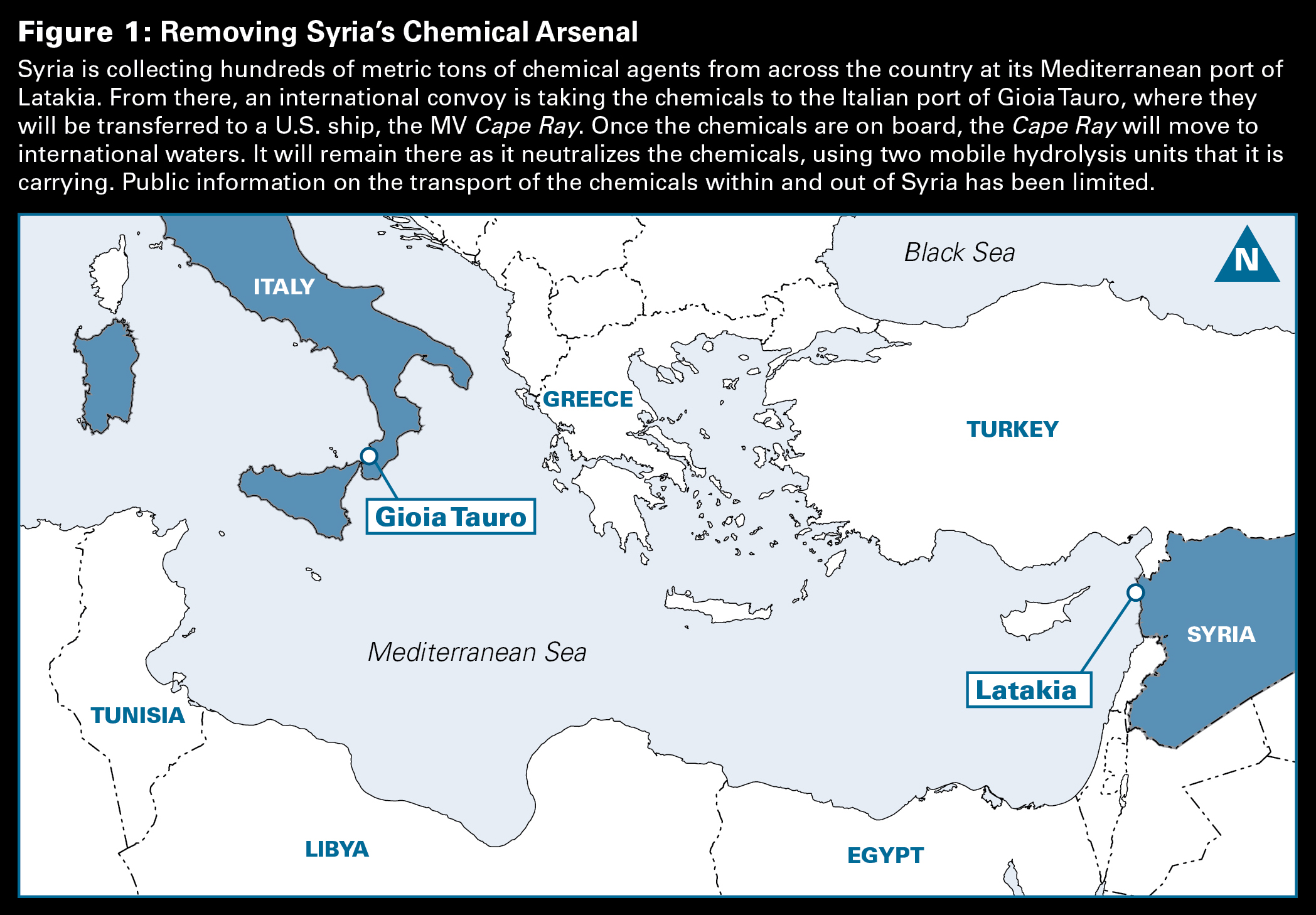 At a Feb. 6 press briefing at the United Nations, Sigrid Kaag, the special coordinator of the joint OPCW-UN mission to oversee the removal and destruction operation, while noting the “volatile and precarious” conditions in the country, called for an “intensification of effort” by Syria to achieve increased “pace, volume, and predictability.”

The figures cited by Mikulak encompassed shipments that left Latakia on Jan. 7, Jan. 27, and Feb. 10. On Feb. 26, Kaag announced a fourth shipment, which she said was composed of sulfur mustard. The vast majority of the priority chemicals are key chemical components of nerve agents such as VX and sarin, along with a small amount of sulfur mustard, which is in weapons-usable form.

At her Feb. 6 briefing, Kaag had cited the mustard agent to illustrate a caution she raised about putting excessive stock in the removal numbers. Although the mustard agent accounts for only 1.5 percent, or about 20 metric tons, of the total Syrian stockpile, it is “the most harmful chemical agent.” Thus, “once that gets removed for onward destruction, a significant harmful agent is out of country,” she said.

In the Feb. 26 announcement, she did not indicate if the shipment encompassed the entire Syrian stockpile of sulfur mustard.

At the Feb. 6 UN briefing, she said the June 30 deadline is “the important one” and “can be met.” She said that

“[i]ntermediate milestones ideally should have been met,” but have not been. She referred to work on a new plan “against which further benchmarking can take place.”

Although the delays in removal have shortened the time available for out-of-country destruction of the Syrian chemicals, a Russian official said in a Feb. 24 e-mail to Arms Control Today that he was “not aware of anyone promoting an idea of changing the June 30 deadline.” That date “remains feasible and that is what Syria is trying to do,” he said.

But he described the deadline by saying, “As far as Syria is concerned, removal effectively eliminates its capability. When removal and on-site activities are done by June 30, Syria will have met its obligations.”

Mikulak appeared to be responding directly to that interpretation in his Feb. 21 statement when he said, “[D]estruc-tion—not just removal—of Syrian chemical weapons must be completed by June 30, 2014.”

Under the plans for the destruction of the Syrian chemicals, 560 metric tons, according to the OPCW, will be taken by an international convoy from Latakia to the Italian port of Gioia Tauro. The chemicals then will be transferred to a U.S. ship, the MV Cape Ray. Once the chemicals are on board, the Cape Ray will move to international waters and neutralize them using two mobile units that it is carrying.

The Cape Ray left Portsmouth, Va., on Jan. 27 and is docked at Rota, Spain, where it will stay until Syria has completed the removal of the chemicals from its territory, the Defense Department said in a Feb. 13 press release.

About 150 metric tons of Syrian chemicals are to be incinerated in the United Kingdom.

The second-priority chemicals, totaling about 500 metric tons, and the liquid waste from the destruction operation on the Cape Ray are to be handled through commercial disposal. The OPCW announced Feb. 14 that it had awarded the contracts for that work to Ekokem of Finland and Veolia Environmental Services Technical Solutions, a U.S. subsidiary of a French company.

Syria is destroying about 120 metric tons of isopropanol domestically. In a Feb. 10 statement, OPCW Director-General Ahmet Üzümcü said 93 percent of that chemical had been eliminated.