Amid bipartisan congressional concerns about the cost, the Defense Department is defending its plan to rebuild the remaining stockpile of U.S. nuclear warheads, including the B61 bomb.

The National Nuclear Security Administration (NNSA) estimates that the program could cost more than $60 billion. James Miller, undersecretary of defense for policy, said July 17 that he continues to think that the program is “very sensible.” But the Senate and House have taken steps to rein in the program at a time of tight budgets.

In an Aug. 6 interview, a staffer for a key senator called the program’s cost “insane” and questioned whether the expense was consistent with President Barack Obama’s commitment to nuclear weapons reductions. In June, Obama said the United States could reduce the number of strategic nuclear weapons it deploys “by up to one-third.” (See ACT, July/August 2013.)

The NNSA rolled out the new strategy in June in its Stockpile Stewardship and Management Plan for fiscal year 2014. The strategy, known as “3+2,” involves a 25-year plan for rebuilding the stockpile and reducing the number of warhead types from seven today to five. 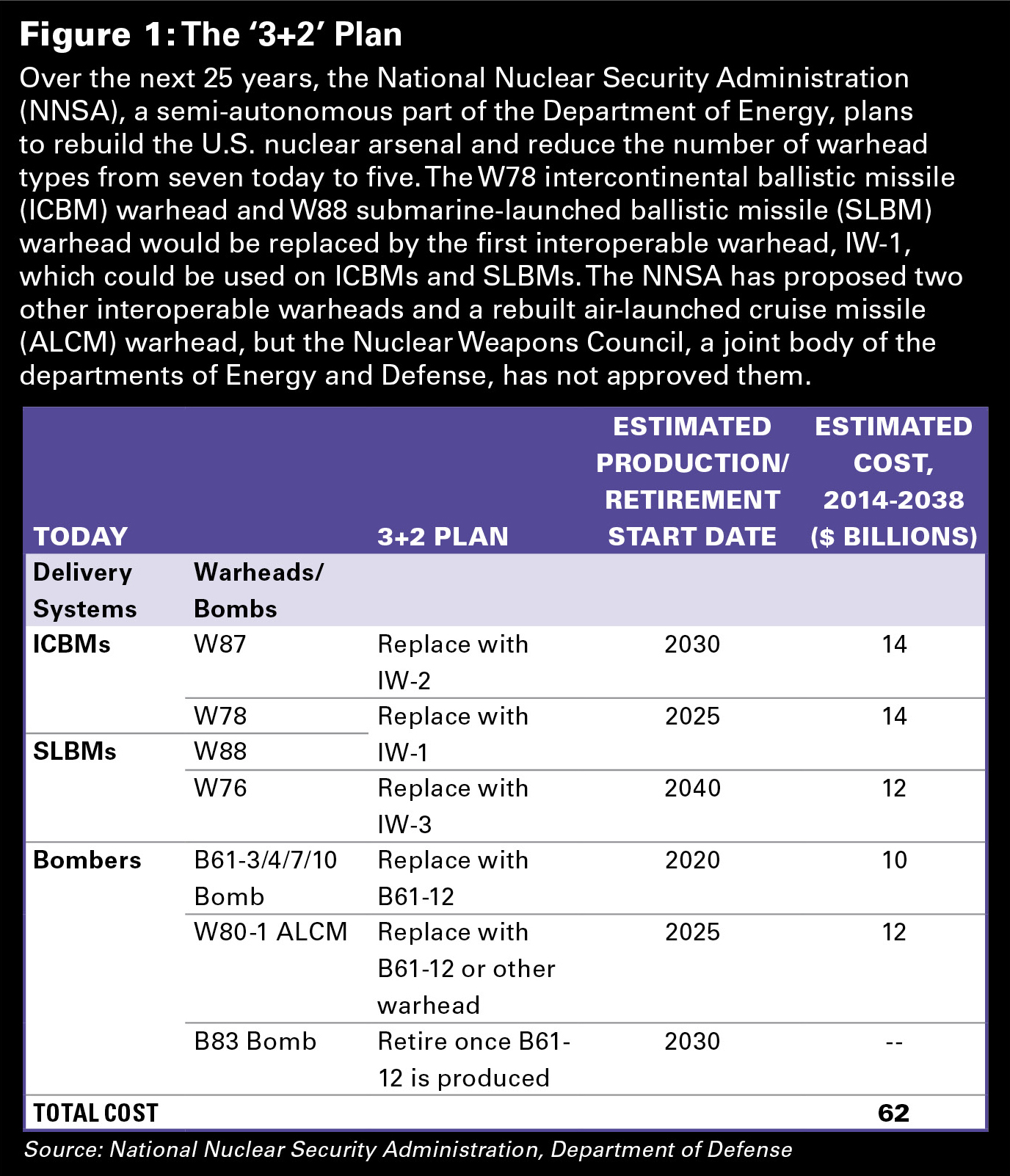 According to Miller, part of the administration’s motivation for developing an interoperable warhead is to avoid having only one warhead type for any delivery system in case there is a problem that affects all warheads of a particular type. Miller said July 17 at a Capitol Hill briefing that it is “strongly preferable not to be down to a single warhead in case there’s an issue with it, and therefore to have an inherent hedge.”

Miller said he and his colleagues have been making the case for the 3+2 plan on Capitol Hill and that he has seen nothing to make him change the strategy. But, he said, “it comes down, as in every instance, to the resources required to implement the strategy.”

Under the NNSA plan, replacing the five warhead types to be retained would cost $12.5 billion each on average. Moreover, the NNSA has a history of significantly underestimating resources requirements. For example, the projected cost of the B61 life extension program has more than doubled in the past few years. (See ACT, May 2013.)

The NNSA claims that the refurbished warheads would cost less to maintain than those they replace “due to consolidation of warhead types.” Yet, there is no public analysis to support this assertion; and the extent of these savings “has not yet been determined,” the NNSA acknowledges.

The actual cost of the program will be determined by how many warhead types ultimately are rebuilt. For example, the NNSA and the Pentagon disagree about how many interoperable warheads are needed. The NNSA says it wants three types, at an estimated cost of $40 billion. But the Defense Department thinks only the first one may be necessary, according to senior Pentagon and Senate staff. Defense officials are also questioning the need for a rebuilt warhead for the Air Force’s Air-Launched Cruise Missile (ALCM). That warhead could cost another $12 billion. No decision has been made to build the new ALCM.

Meanwhile, the Navy is questioning the NNSA concept of the interoperable warhead. In a September 2012 memo to the Nuclear Weapons Council, through which the Defense and Energy departments coordinate management of the U.S. nuclear weapons stockpile, the Navy said it does “not support commencing the effort at this time,” due in part to “uncertainty” about the NNSA’s “ability to execute its currently programmed work.” In response, the council decided in December to study an option for the Navy’s W88 warhead that would not be interoperable.

The 3+2 plan has received mixed reviews on Capitol Hill. In a spending bill approved in June, the Senate Appropriations Committee provided $369 million for the B61 gravity bomb for fiscal year 2014. That is the same funding level as in fiscal year 2013 but 30 percent below the $537 million that the administration requested. In its report, the committee wrote that it is “concerned that NNSA’s proposed scope of work for extending the life of the B61 bomb is not the lowest cost, lowest risk option that meets military requirements.” The bill is not expected to go to the Senate floor, but it may be included in an omnibus appropriations bill at some point.

Then, on Aug. 1, the committee provided $6 million for a new B61 tail kit, less than 10 percent of the $68 million that the Air Force requested. With a lifetime program cost of $3.7 billion, the tail kit would increase the accuracy of the B61.

The Senate appropriators’ budget allocations would, if enacted, force the NNSA to choose a cheaper path for the B61, which the Pentagon projects would cost more than $10 billion to produce, not including the tail kit. The NNSA would likely have to forgo its plans to consolidate four versions of the bomb into one, the proposed B61-12. Without the consolidation, the new tail kit would not be needed, the Senate staffer said.

The Senate Appropriations Committee also questioned the NNSA’s broader plans to make warheads interoperable. The first such project would integrate the W78 ICBM warhead and the W88 SLBM warhead, known as Interoperable Warhead-1 (IW-1), and would cost at least $14 billion, according to the NNSA. The committee wrote that an interoperable warhead “may be unnecessarily complex and expensive, increase uncertainty about certification,” and “fail to address aging issues [such as the need to replace components with limited lifetimes] in a timely manner.” The Senate Armed Services Committee raised similar cost and mission concerns about the IW-1 in June.

The House Appropriations Committee raised its own concerns about a joint W78/W88 warhead, stating that the committee “will not support dedicating significant funding for new stockpile transformation concepts” unless the administration can show “benefits that justify such a large investment.” The House cut the budget request for the joint W78/W88 warhead by $23 million, but increased funding for the B61 by the same amount.