A Defense Department review has found that the program to extend the service life of the B61 nuclear bomb, many of which are currently deployed in Europe, may cost billions of dollars more and take years longer than previously estimated.

The projected cost growth and schedule delay raise new questions about the viability of the program in the face of increasing pressures on the federal budget and the bomb’s uncertain future in Europe, congressional staff and former administration officials said.

The United States currently keeps about 180 B61s for tactical use on short-range aircraft in Europe to support NATO. These weapons have become a major symbol of U.S. military commitment to the alliance. But pressure from some NATO allies, such as Germany, to remove the weapons raises the possibility that the bombs might not be needed a decade from now, when the proposed rebuilding program would be complete.

An additional factor is the prospect that a future agreement between Russia and the United States might require that such bombs be deployed only on those two countries’ territories. As one congressional staffer said in a Nov. 16 interview, “By the time these weapons are ready, will we still have nuclear weapons in Europe?”

The Pentagon review of the B61 life extension program (LEP), dated July 13, has not been publicly released. Arms Control Today obtained a copy in November.

The study estimated that the program would cost $10.4 billion and would not produce the first refurbished bomb until fiscal year 2022. With about 400 B61s reportedly planned for renovation, that works out to roughly $25 million per bomb.

The Energy Department’s semi-autonomous National Nuclear Security Administration (NNSA), which oversees the B61 program, is sticking to its current estimate that the program will cost about $7 billion and produce its first bomb in fiscal year 2019. Two years ago, the NNSA estimated that the program would cost $4 billion and start in 2017.

The Pentagon review, conducted by the Cost Analysis Program Evaluation (CAPE) office, said the NNSA was underestimating labor costs and the complexity of the B61 LEP, which Sandia National Laboratories said in April is roughly three times more complex than the LEP for the W76 warhead deployed on Trident submarine-launched missiles. An NNSA spokesman said in a Nov. 15 e-mail to Arms Control Today that the agency was reviewing the CAPE study and other information “so that we’re certain we have a cost baseline that is as accurate as possible.”

The cost increases in particular have drawn attention to the program on Capitol Hill. When the Defense Department estimate of $10.4 billion, one of the few elements that has been made public, was first revealed in July, Sen. Dianne Feinstein (D-Calif.), who chairs the Senate Appropriations subcommittee that controls NNSA funding, said the new price tag requires the NNSA to find billions of dollars “at a time when budgets are shrinking.” For fiscal year 2012, Congress, concerned that NNSA plans for the B61 LEP were too risky, required an independent review by JASON, a group of senior science and defense advisers to the government.

The projected schedule slippage also is potentially significant as the Pentagon and the NNSA have stated that B61 bomb parts will need to be replaced soon or the bombs will no longer meet operational requirements, such as the ability to produce a specific explosive yield. The NNSA had planned to complete the program by 2022, but the Pentagon review suggests this deadline would be missed by a few years.

“NATO reaffirmed recently that it wants U.S. forward-deployed tactical nuclear weapons to remain in Europe,” said Rep. Michael Turner (R-Ohio), chairman of the House Armed Services Strategic Forces Subcommittee, at an Aug. 1 hearing. “Yet, we are faced with the risk, of our own doing, that we may fail to honor that commitment,” he said.

The B61 is the only tactical nuclear bomb in the U.S. arsenal. The Obama administration called for the B61 LEP in its 2010 “Nuclear Posture Review Report.”

In interviews in recent weeks, congressional staffers and former administration and national laboratory officials involved with nuclear weapons policy said the bombs will not, as one put it, turn into “green cheese” if the upgrades are not completed on time. The bombs will still explode, they agreed, and one said the actual yield may differ from the planned yield by 10 percent.

Bob Peurifoy, a former director of weapons development at Sandia, said in a Nov. 15 interview that the B61, like all modern nuclear weapons, has components that have a limited life and are replaced on a regular basis. This includes the neutron generators and gas transfer systems, both of which use tritium, a radioactive form of hydrogen that boosts the yield of the primary stage of the bomb. Tritium decays at a rate of 5.5 percent annually and must be replenished.

The B61 LEP is not focused on these relatively easy fixes, but on replacing the thousands of non-nuclear parts that may degrade over time, such as switches, foams, and cables. Although these parts are getting older, there is no evidence that they are about to fail, Peurifoy said. Aside from the tritium parts, the B61 “should be left alone until the stockpile surveillance process finds a problem,” he said.

The stockpile surveillance program, run by Sandia, inspects 11 warheads of each type of warhead in the U.S. arsenal each year to look for problems and conducts experiments to predict when certain parts may begin to fail. Besides the limited-life components, there is no basis for the NNSA’s claim that the B61 would become nonoperational in 2022, Peurifoy said. 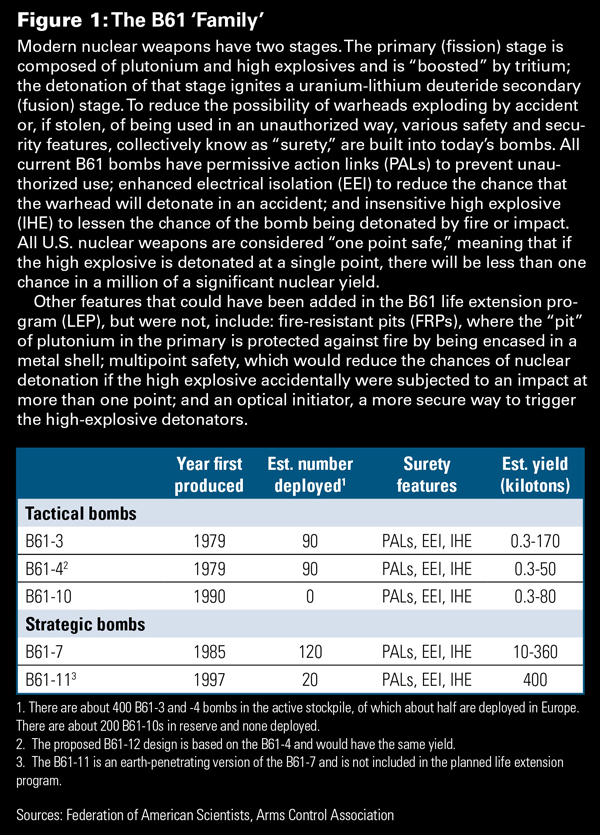 Others disagree. In a Nov. 15 interview, a congressional staffer said that, “of all the LEPs, this is the worst” in terms of the consequences for the weapon’s performance if the upgrades are not carried out. If the directors of the nuclear weapons laboratories lose confidence in the bomb, they may not certify it for operation, a former administration official said in a Nov. 14 interview. Even so, to save money, the NNSA decided to extend the bomb’s life for 20 years instead of 30.

Other than extending the life of the B61, the NNSA wants to “look for opportunities to improve safety and reliability using modern technology along the way,” the agency spokesman said. The NNSA and the Pentagon considered many new concepts early in the process to increase the weapon’s safety against accidental detonation and security against unauthorized access and use, known together as “surety.” But after conducting cost-benefit analyses, the Nuclear Weapons Council, staffed by senior Pentagon and NNSA officials, “rejected all the fancy upgrades,” another former administration official said.

For example, the new bomb would not have “multi-point safety,” a “fire-resistant pit,” or an “optical initiator,” according to a congressional staffer (fig. 1). The B61 already has many of the most modern surety features, and the LEP would not add major new ones. The NNSA spokesman declined to comment on that point, citing classification rules.

The U.S. arsenal includes five different versions, or “mods,” of the B61, first produced in 1979. Tactical versions of the B61 would be carried on fighter jets by U.S. and NATO forces in Europe and, due to their forward deployment in the field, are seen as more vulnerable to possible theft than the strategic mods carried by heavy bombers based in the United States.

The NNSA would address these concerns in part by folding four of the versions into a new one, the B61-12, whose design would be based on that of the B61-4. The B61-4 has the lowest maximum yield of the B61 series, meaning it has the smallest amount of fissile material, according to a May 2011 Government Accountability Office report.

The Pentagon also wants to replace the radar, congressional staffers said. The radar tells the bomb when it reaches the right altitude to explode; it is an old model that still uses vacuum tubes.

One cost-saving proposal being discussed on Capitol Hill, according to the staffers, would scale back the B61 LEP by replacing only the parts that are known to be at the end of their lives and only for the weapons that Congress determines are likely to still be deployed a decade from now. For example, the NNSA could just upgrade the strategic B61-7, of which there are an estimated 120 deployed, and replace only the two tritium-dependent parts and the radar. As for the roughly 180 bombs based in Europe, such changes could be made as needed or the bombs could be sent back to the United States.