The latest data exchange under the 2010 New Strategic Arms Reduction Treaty (New START) indicates gradual progress by the United States in drawing down its nuclear arsenal and a substantial numerical gap between U.S. and Russian forces.

For deployed nuclear warheads and delivery vehicles, Russia remains below treaty limits. The United States continues to be well above the limits, leading to calls by some experts for the Defense Department to accelerate its reductions.

The State Department on Oct. 3 released the figures from the latest data exchange for nuclear weapons under New START. The United States and Russia are required by the treaty to exchange data in three categories of strategic forces every six months.

The treaty restricts the numbers of both sides’ deployed strategic warheads to 1,550, deployed delivery systems to 700, and deployed and nondeployed missile launchers and bombers to 800 each. Under the treaty, these limits do not have to be met until February 2018. Both countries maintain thousands of additional warheads for tactical missions and in storage.

Neither side’s strategic force levels have undergone dramatic changes since the first data exchange, and some experts are questioning the slow pace of U.S. reductions and the gap between U.S. and Russian forces. For example, a recently published book found that as Russia is on track to meet its New START limits well ahead of schedule, “Washington might consider accelerating implementation of its New START reductions as well.” Such early implementation might signal “Washington’s seriousness in reducing nuclear arms and help secure Russian agreement to a further round of negotiations,” said authors Steven Pifer and Michael E. O’Hanlon of the Brookings Institution.

Similarly, an Aug. 14 draft report from the U.S. secretary of state’s International Security Advisory Board found that the United States could accelerate its reductions under New START, allowing both sides to avoid “costly or destabilizing” programs to modernize strategic forces. The report said that U.S. reductions might encourage Russia to reconsider its plans, announced in September, to deploy a new “heavy” intercontinental ballistic missile (ICBM) by 2018. (See ACT, October 2012.) 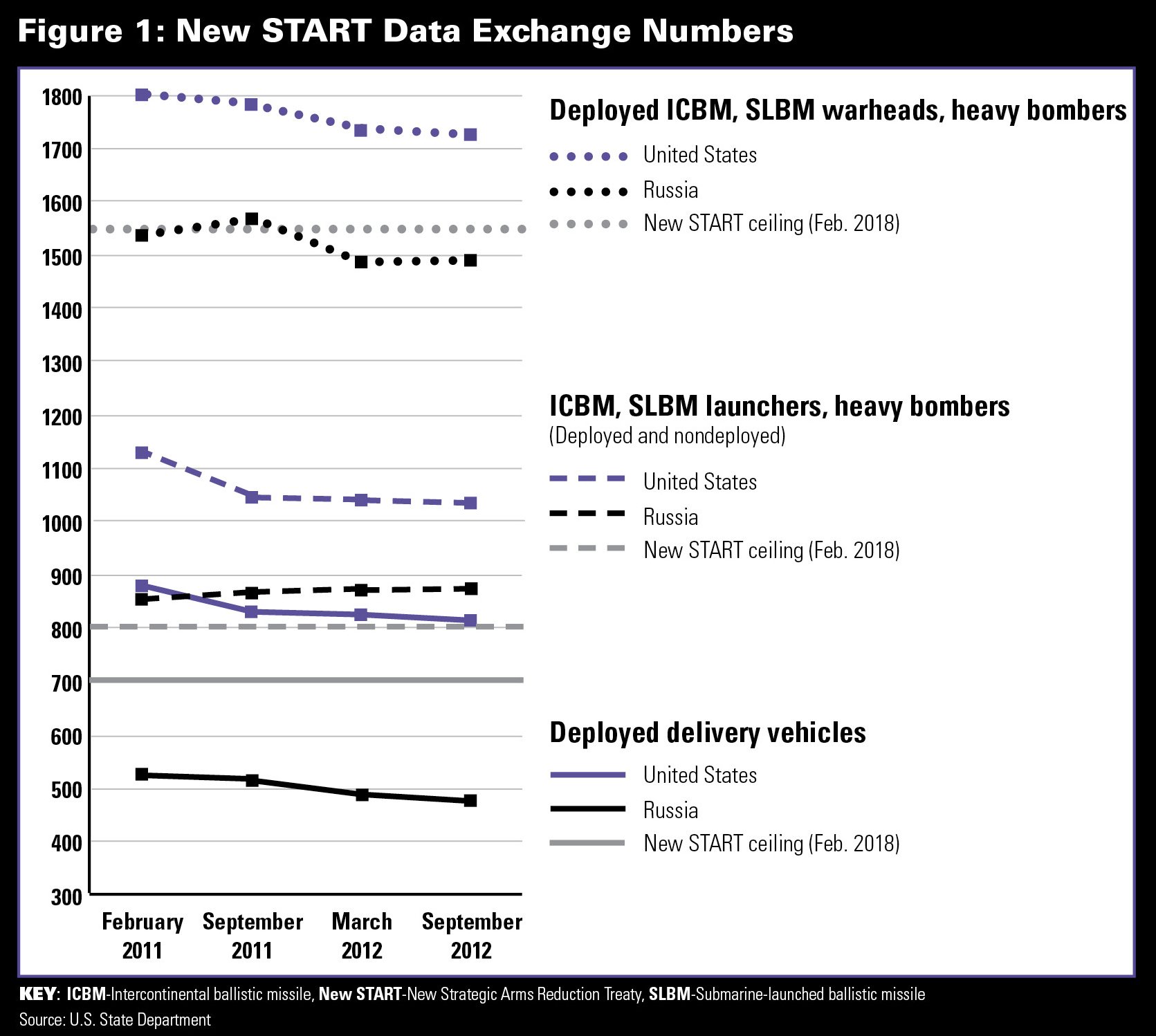 According to Pifer and O’Hanlon, reductions in strategic warheads would be easier to accelerate than those in delivery vehicles because they would require only that warheads be removed from deployed missiles and the missiles themselves would not have to be removed immediately.

In an Oct. 22 e-mail to Arms Control Today, a Defense Department spokeswoman noted that New START “does not mandate any schedules” for reductions other than that the central limits must be met by February 2018. The Obama administration, according to the spokeswoman, has consistently stated that it plans to make most reductions “toward the end of the seven-year implementation period” and, by doing so, “the United States will maintain the viability of each leg” of the nuclear triad of submarines, bombers, and ICBMs, “satisfy the strategic targeting and planning requirements set forth in classified [Defense Department] guidance for the employment of nuclear forces,” and comply with New START.

Some members of Congress, such as Rep. Michael Turner (R-Ohio), chairman of the House Armed Services Strategic Forces Subcommittee, have said that it would be risky for the United States to bring its arsenal below New START levels at the same time that Russia and other countries “remain committed to nuclear weapons.”

According to a Defense Department report on Russian nuclear weapons, sent to Congress in May and declassified in October, the ability of U.S. weapons to survive a Russian attack is more important than the number of weapons on each side. The report said that Russian deployment of forces in numbers significantly above New START limits “would have little to no effect on the U.S. assured second-strike capabilities that underwrite our strategic deterrence posture.”

Moscow would not be able to achieve military advantage by “any plausible expansion of its strategic nuclear forces,” the report says, because sufficient U.S. forces would survive and be able to retaliate. This second-strike survivability comes primarily from Ohio-class ballistic missile submarines, “a number of which are at sea at any given time.”

The report, obtained by the Federation of American Scientists under the Freedom of Information Act, says that a nuclear first strike by Russia “will most likely not occur.”