The United States concluded arms agreements worth $66.3 billion in 2011, representing more than three-quarters of the total value of such agreements worldwide, according to a recently released report by the Congressional Research Service (CRS).

Agreements with developing countries in 2011 accounted for $56.3 billion of the U.S. total, said the report by CRS analysts Richard Grimmett and Paul Kerr. That translated into a market share of 79 percent of that category, compared to a 44 percent share in 2010, the report said.

As Grimmett and Kerr noted, the figures were heavily influenced by U.S. deals with Saudi Arabia that were worth $33.4 billion. Under those agreements, the United States is to provide a variety of weapons and related items, most notably 84 new F-15SA fighter aircraft and upgrades to 70 planes in the existing Saudi fleet. Congress reviewed the deal in late 2010 and raised questions about it, but did not make a concerted effort to block it. (See ACT, December 2010.) 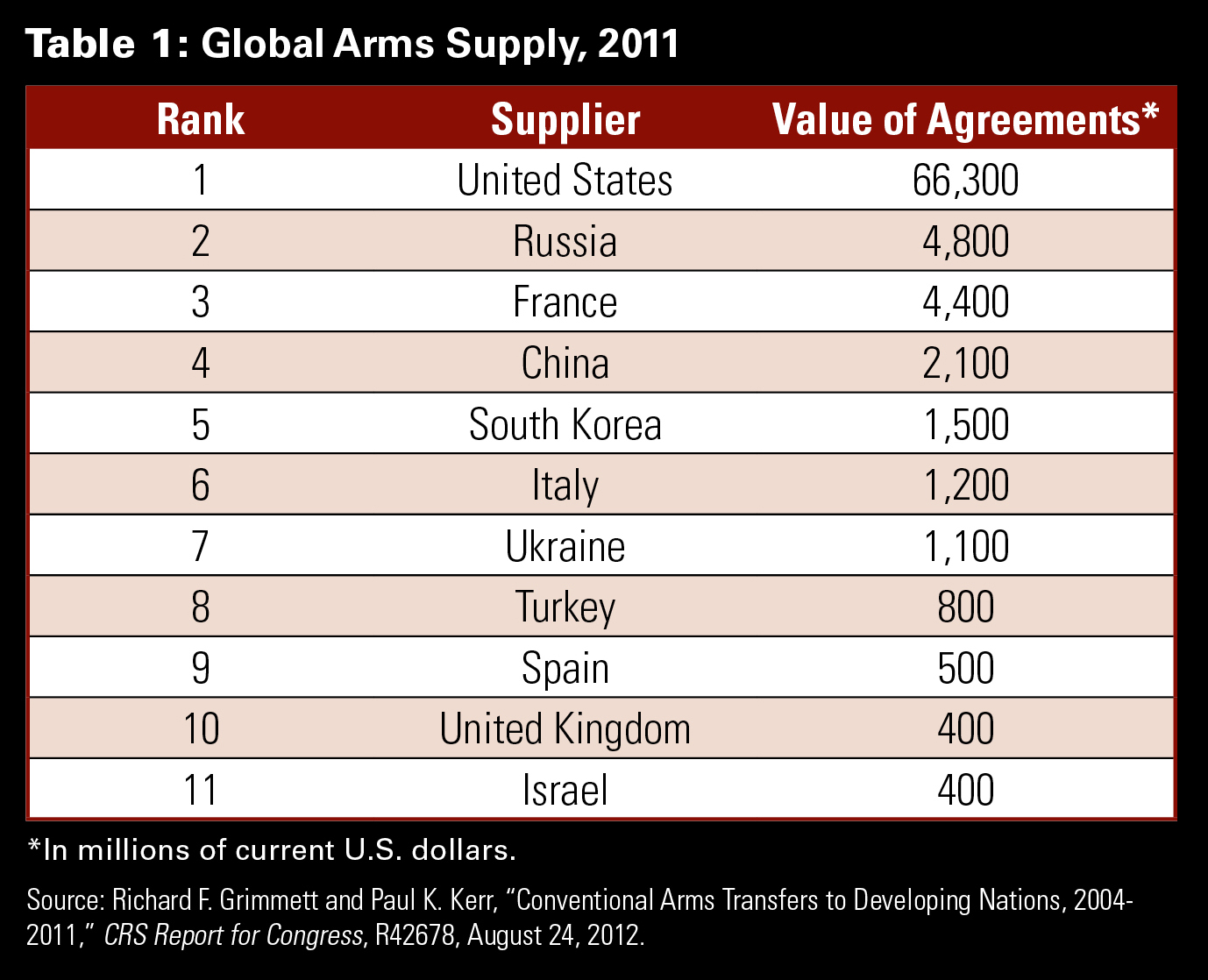 The $85.3 billion in arms agreements is particularly striking because the figure for 2010 was abnormally low. The report covers the years 2004-2011, and 2010 is the only year in that period in which the global total fell below $50 billion (in constant 2011 dollars). Nevertheless, the 2011 total is significantly higher than any other year covered in the report.

Notwithstanding the 2011 results, the global arms market is “not likely growing overall,” and the U.S. figure for that year “seems a clear outlier,” Grimmett and Kerr said. Worldwide financial conditions stemming from the 2008 recession and the European financial crisis have “generally limited defense purchases of prospective customers,” they said.

Nevertheless, some of the data and findings in the report suggest that certain aspects of the 2011 picture could continue. Although the United States faces stiff competition from other suppliers, “it appears likely it will hold its position as the principal supplier to key developing world nations, especially with those able to afford major new weapons,” the report said. In the report, the term “developing nations” includes all countries except Australia, Canada, Japan, New Zealand, Russia, the United States, and European countries.

According to the report, Washington has a “large and diverse” client base, built up over many years, and these countries will want upgrades, spare parts, ordnance, and support services for the weapon systems the United States provided in previous years. “This provides a steady stream of orders from year to year, even when the United States does not conclude major new arms agreements for major weapon systems,” the report said.

In contrast, Grimmett and Kerr saw some unpromising signs for Russia’s long-term efforts. According to the report, “[T]he absence of substantial funding for new research and development efforts in [missiles, aircraft,] and other military equipment areas has hampered Russia’s longer-term foreign arms sales prospects” as “other major arms suppliers have advanced much more rapidly” in that respect. As evidence of this trend, the CRS analysts cited Russia’s decision to acquire French technology through the purchase of the Mistral amphibious warship rather than developing a similar vessel indigenously.

Yet, the report pointed to some potential growth areas for the Russian arms business. Citing Venezuela in particular, the report noted Moscow’s increased sales efforts in Latin America. More broadly, the study said, Russia in recent years has become more flexible and creative with regard to its customers’ financing and payment arrangements and “continues efforts to enhance the quality of its follow-on support services” as it pursues business with developing countries.

China also appears in the report as a supplier, ranking fourth with $2.1 billion in arms agreements for 2011. According to Grimmett and Kerr, “Most Chinese weapons for export are less advanced and sophisticated than weaponry available from Western suppliers or Russia.” China’s customers are likely to be Asian and African countries looking for small arms and light weapons, the CRS analysts said.

The report described China as having been “an important source of missiles to some developing countries.” The report said, “According to U.S. officials, the Chinese government no longer supplies other countries with complete missile systems. However, Chinese entities are suppliers of missile-related technology.” Making the same distinction between “entities” and the government, Vann Van Diepen, the State Department’s top missile nonproliferation official, said in a June interview with Arms Control Today that “right now, there’s a substantial problem of Chinese entities providing missile technology to programs in places like Iran and North Korea.”

According to the CRS report, the missile-related deals raise “questions about China’s willingness to fulfill the government’s stated commitment to act in accordance with the restrictions on missile transfers set out in the Missile Technology Control Regime.”

Much of the report focuses on arms transfers to the developing world. The data in the report indicate a general trend in which those countries represent an increasing share of the customer base for the global arms trade. From 2004 through 2007, the first half of the eight-year period covered by the report, developing countries accounted for 67 percent of the value of all arms transfer agreements made worldwide. For the period 2008-2011, developing countries represented 79 percent of those agreements, accounting for 84 percent in 2011.

In addition to documenting arms trade agreements, the report tracks arms deliveries. Arms agreements typically are implemented over years, and the deliveries may not represent the full amount contained in the agreement. The United States led decisively in that category for 2011, with $16.2 billion in deliveries, representing 37 percent of the market. Russia was second with $8.7 billion.

The CRS report on the conventional arms trade has been published annually since 1982 and is widely known as the Grimmett report. Grimmett retired at the end of September.