“Over the past 50 years, ACA has contributed to bridging diversity, equity, inclusion and that's by ensuring that women of color are elevated in this space.”
– Shalonda Spencer
Women of Color Advancing Peace, Security, and Conflict Transformation
June 2, 2022
Paul Walker, Vice Chair of the Board 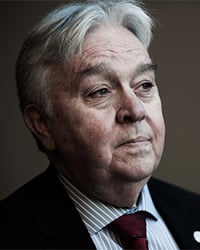 Dr. Paul F. Walker is the vice chair of the Arms Control Association board of directors. He is also Chair of the Chemical Weapons Convention Coalition and director of Green Cross International (GCI)’s Environmental Security and Sustainability program and manager of the GCI's Washington D.C. office.

Paul received the Right Livelihood Award (otherwise known as the “Alternative Nobel Prize”) in December 2013 “for working tirelessly to rid the world of chemical weapons.” He is a former professional staff member of the House Armed Services Committee, and holds a Ph.D. in international security studies from the Massachusetts Institute of Technology.

In December 2009, at the 14th Conference of the States Parties in The Hague, Walker led the effort to establish the Chemical Weapons Convention (CWC) Coalition, an international nongovernmental organization network to support the CWC and the Organization for the Prohibition of Chemical Weapons. Walker is also a founding member of the Fissile Material Working Group, and has worked on nuclear, chemical, and biological weapons nonproliferation, arms control, and disarmament for over forty years.