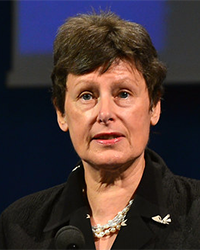 Angela Kane is the former United Nations High Representative for Disarmament Affairs. She provided strategy, vision and thought leadership for the UN on its multilateral disarmament and non-proliferation agendas. She was responsible for planning, negotiating and conducting the ground-breaking investigation of alleged chemical weapons use in Syria in 2013, which resulted in Syria’s destruction of its chemical stocks.

Her field experience includes Deputy Special Representative of the Secretary-General for the United Nations Mission in Ethiopia and Eritrea (UNMEE), a special assignment to the Democratic Republic of the Congo and multi-year postings in Indonesia and Thailand. Kane now serves as a senior fellow at the Vienna Center for Disarmament and Non-Proliferation.