After over a decade of negotiations, Iran, the United States and its P5+1 partners (China, France, Germany, Russia, and the United Kingdom) reached a historic nuclear deal on July 14. The agreement—the Joint Comprehensive Plan of Action (JCPOA)—was the result of over 20 months of negotiations and, if implemented, will block Iran’s pathways to nuclear weapons for at least 15 years and put in place additional transparency measures permanently.

In exchange for nuclear restrictions and intrusive monitoring, the deal will provide Iran with relief from nuclear-related sanctions and allow it to pursue a limited civilian nuclear power program.

In total, the JCPOA will block Iran's potential pathways to nuclear weapons using highly-enriched uranium and plutonium and guard against a covert nuclear weapons program. 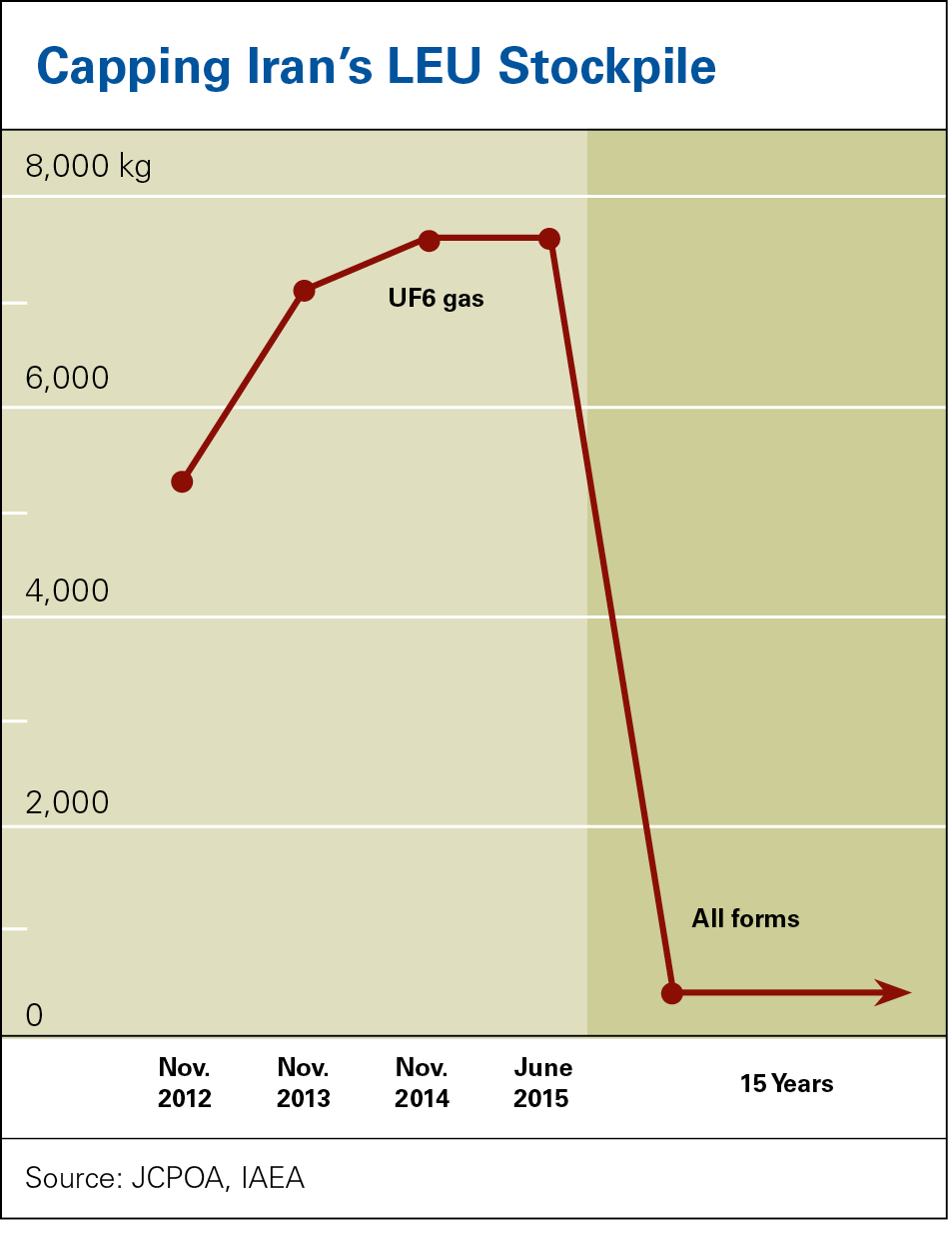 The restrictions on Iran’s uranium-enrichment program will ensure that Tehran cannot produce enough weapons-grade uranium for a bomb in less than 12 months for over a decade. In addition to monitoring Iran’s entire uranium supply chain, the key restrictions include

The restrictions blocking Iran’s plutonium pathway are even stronger. Under the terms of the JCPOA, Iran will

The JCPOA will put in place enhanced international monitoring and accountancy to promptly detect and deter Iranian noncompliance. It sets up a multilayered system to monitor and inspect every aspect of Iran’s nuclear supply chain and fuel cycle. Other elements, including access to a wider number of nuclear sites—notably centrifuge manufacturing sites—and inspections on short notice under the terms of Iran’s additional protocol, will be permanent. Inspectors will have timely access to any site, anywhere, including military sites, if there is evidence of suspicious nuclear activities. With sufficient resources, the International Atomic Energy Agency (IAEA) will be able to verify Iran’s commitments effectively.

The JCPOA’s verification and monitoring requirements include 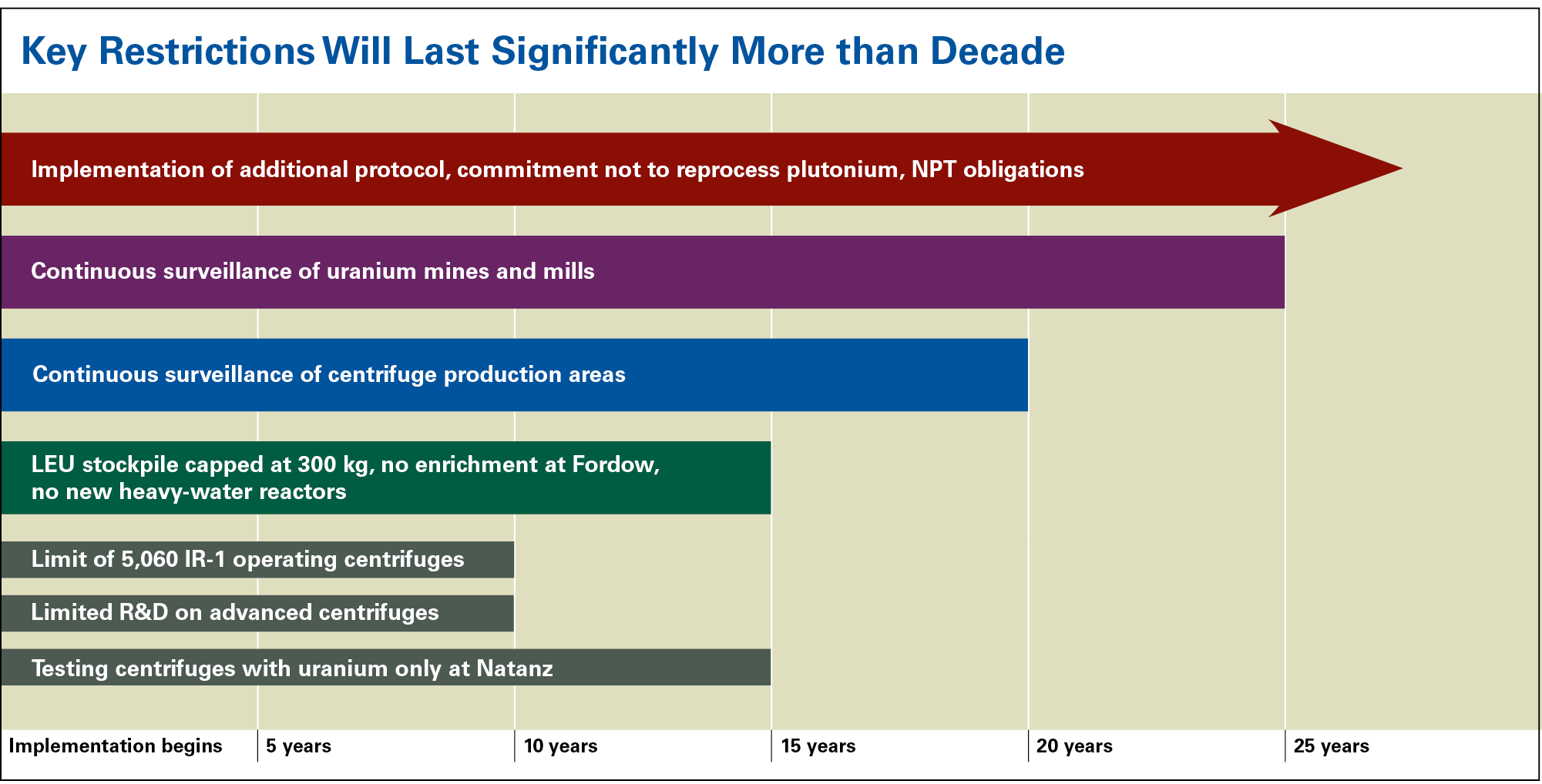 The structure of the deal also increases the likelihood of Iranian compliance by providing incentives for Tehran to follow through on its commitments. No sanctions relief will be granted until Iran has taken key steps to limit its program and put in place additional transparency measures. If Iran fails to comply with the restrictions of the deal, sanctions will snap back into place.

In this agreement, Iran also achieved its objectives—namely receiving sanctions relief and maintaining nuclear infrastructure for a peaceful nuclear program. The domestic implications of Iran being able to sell the JCPOA as meeting its core needs will increase buy-in and the incentive to implement the agreement.

Critics of the JCPOA argue that a “better deal,” one that completely dismantles Iran’s nuclear infrastructure or gives inspectors carte blanche access to military sites in Iran, is possible. But there is no realistic, achievable alternative to this agreement.

Attempting to exert further pressure on Iran through military action or additional sanctions will destroy the good deal at hand and invite Iran to escalate its nuclear program. If the United States is seen as responsible for blocking implementation of the deal, it will be extremely difficult to continue international support for the sanctions that have helped push Iran to the negotiating table.

U.S. national intelligence has assessed that since 2007 Iran has had a nuclear weapons capability. That capability cannot be bombed or sanctioned away. The only way to mitigate the threat of an Iranian nuclear weapon is to restrict and monitor its nuclear capabilities to ensure that any violations will be quickly detected.

The JCPOA meets U.S. nonproliferation goals and strengthens U.S. national security by guarding against an Iranian nuclear weapons program for the next 15 years. Beyond that timeframe it offers greater assurance to the international community that any move toward nuclear weapons will be quickly detected and there will be time to disrupt Iran’s pursuit of the bomb.

It is also important to view the deal in the context of Iran’s decision-making on nuclear issues. As Director of National Intelligence James R. Clapper explained in his 2012 testimony, “We judge Iran’s nuclear decision-making is guided by a cost-benefit approach, which offers the international community opportunities to influence Tehran.”

The JCPOA changes the costs and benefits of a nuclear weapons program. Iran entered into the JCPOA voluntarily and agreed to give up certain technologies applicable to nuclear explosives development and abide by restrictions on its nuclear program; the cost of noncompliance with the agreement is severe. If Iran is caught pursuing nuclear weapons, or violating the terms of the deal, the international community will react punitively.

The JCPOA is a historic opportunity to resolve the long-running dispute over Iran’s nuclear program. It is a strong deal from a nonproliferation standpoint and, if implemented, is the best option to guard against an Iranian nuclear weapon.