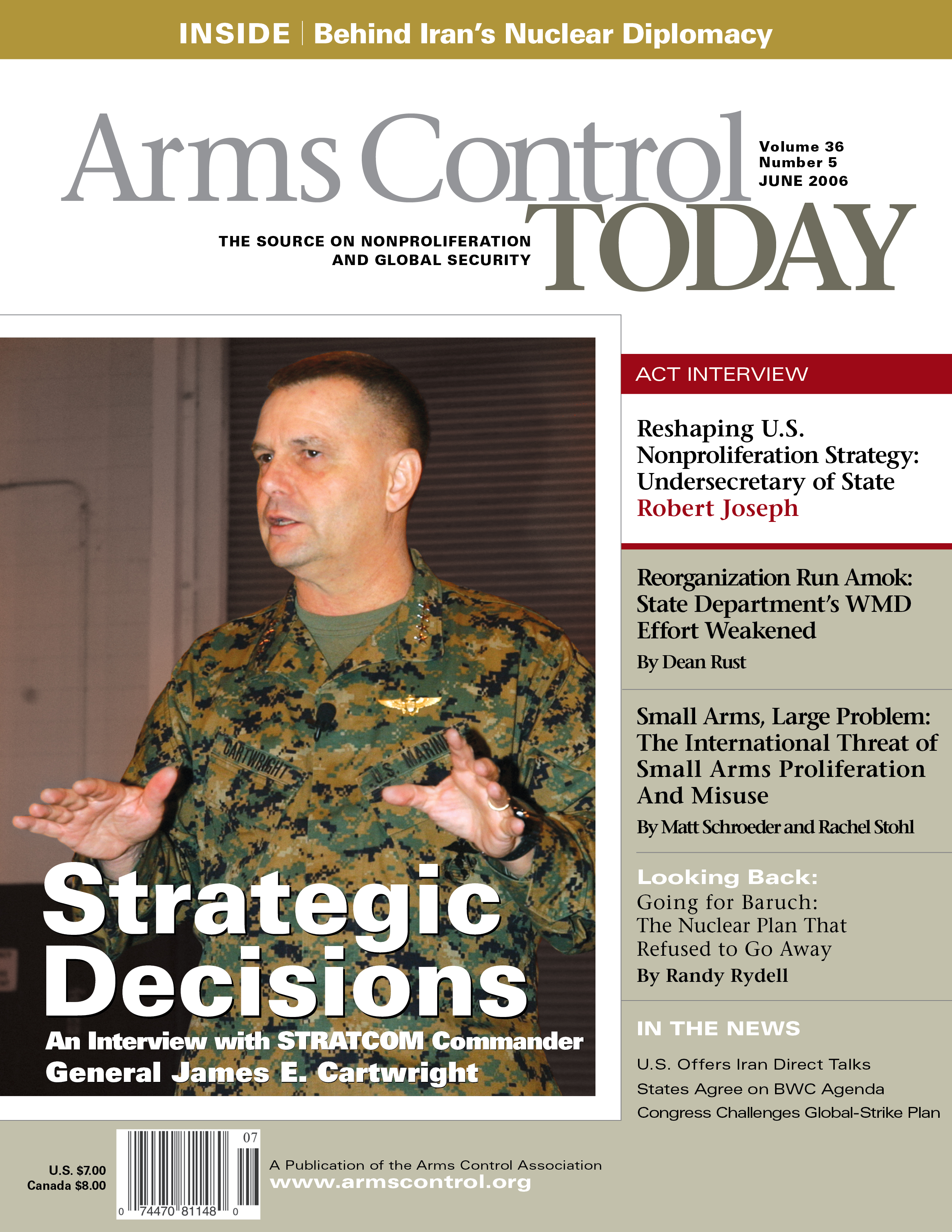 STRATCOM Commander Gen. James E. Cartwright has many responsibilities, but two particularly heavy ones: preventing or deterring a nuclear attack from other countries and executing a U.S. nuclear attack if ordered to do so. In this month’s cover interview, Cartwright argues for changes in U.S. strategy that, in some cases, would lead to less U.S. reliance on nuclear weapons.

Robert Joseph is in many ways Cartwright’s diplomatic counterpart. As undersecretary of state for arms control and international security, Joseph is the Department of State’s point man on arms control and nonproliferation issues. Joseph explains the Bush administration’s views on issues from Iran and North Korea to the proposed U.S.-Indian civil nuclear deal and Washington’s recently unveiled draft fissile material cutoff treaty.

In the ACT interview, Joseph also defends a controversial reorganization of his bailiwick. But Dean Rust, who recently retired from the State Department after 35 years of government service, writes that the reorganization was poorly executed and has potentially endangered U.S. national security.

Joseph’s office will play a leading role at this summer’s conference to review progress in the five years since UN member states approved a Program of Action to tackle the danger posed by small arms and light weapons. These weapons have taken a high human toll, particularly in developing countries. Matt Schroeder and Rachel Stohl provide insight on what the conference can and should achieve.

This issue’s “Looking Back” examines the legacy of another UN effort, the Baruch Plan. This effort, crafted in the immediate aftermath of World War II, sought to provide a path to nuclear disarmament by putting all of the world’s nuclear facilities under UN control. Arms Control Association Senior Fellow Randy Rydell examines the history of the Baruch Plan and its current relevance for international debates about whether Iran and other countries should have uranium-enrichment or plutonium-reprocessing capabilities. Highly enriched uranium or plutonium can be used to provide energy for civilian power plants but also can be used to make nuclear weapons.

Our news section features an analysis of Iran’s perception of its standoff with the United States and the UN Security Council over Iran’s nuclear program. Other stories look at the actions states recently took to pave the way for this fall’s Biological Weapons Convention review conference and at congressional concerns over the Bush administration’s controversial plan to arm some submarine-launched ballistic missiles with conventional warheads.